Renée Zellweger's Performance in ‘Judy’ All But Bellows Oscar Bait 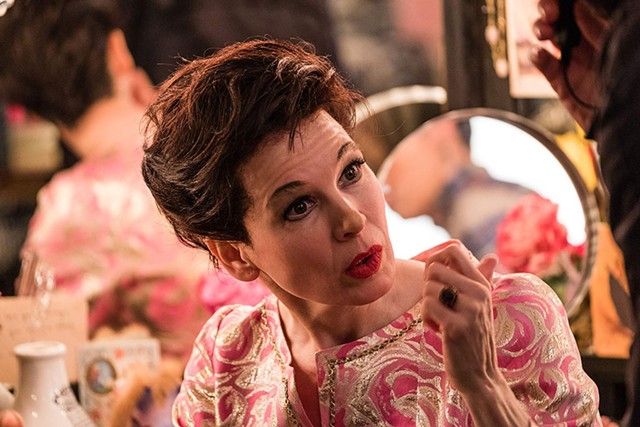 This film, like its subject, has no shortage of serious problems. Who its intended audience is supposed to be eludes me. Few under 50, I suspect, have any idea who Judy Garland was — beyond, perhaps, her role as Dorothy in The Wizard of Oz. And those old enough to recall her years as a best-selling recording artist, award-winning actress, stage performer and television personality are unlikely to have the patience for the one-note cliché that stands in for her here.

Renée Zellweger pretzels her spine, paints her face and pouts to parrot the icon's speaking voice (singing, not so much) in a performance that all but bellows Oscar Bait. As far as I can tell, it single-handedly kicked off this year's awards-season conversation. I'll be surprised, however, if anyone's talking about it by the time the holidays roll around.

Directed by Rupert Goold (True Story) and adapted from Peter Quilter's play by Tom Edge, it's the wispiest of the past year's spate of musical biopics. Beside Judy, Rocketman looks like The Tree of Life. The movie focuses on the entertainer's final comeback attempt, a lucrative series of 1968 London concerts.

But first, viewers are introduced to a Garland struggling to keep a roof over her children's heads by singing in LA clubs for paltry sums. Booted from her hotel suite for lack of payment, she decides to leave them with ex-husband Sidney Luft (Rufus Sewell) and cross the pond. The audience is led to believe this offers Garland's only hope of earning enough to keep the kids with her. Which rings iffy, given that the deal she made for her CBS variety show a few years earlier made her $24 million and was called "the biggest talent deal in TV history." That must've been some hotel bill.

Once the singer arrives in England, the picture shifts into hokum overdrive. Zellweger's Garland is a virtual caricature of the tortured artist. She power-pops speed to get through the day, then is surprised when she can't sleep at night. She refuses to rehearse, and then is surprised when her performances increasingly go off the rails. Take a wild guess whether cocktails are a problem.

Flashbacks intrude on the narrative relentlessly, offering scenes re-creating her early days at MGM when studio head Louis B. Mayer (Richard Cordery) supposedly forbade her from nibbling a burger but made her take uppers and downers to maximize productivity. This is intended to explain the diva's lifelong trauma and insecurity, but Iffy Alert: While Mayer certainly was a control freak, the fact is that Garland's mother — a stage mother if ever there was one — got her hooked on pills long before she set foot on that yellow brick road.

Is it just me, or is it weird that a movie about Judy Garland would show so little interest in Judy Garland movies? You'd never know, for example, that she was nominated for an Oscar and won a Golden Globe for her performance in A Star Is Born (1954). Or that she and Luft were the first to see the remake potential in that now-perennial chestnut. And still she found a way to lose money on the deal.

Speaking of big-screen plans that didn't pan out: Sure, the film is at 83 percent on Rotten Tomatoes, but I bet Marvel-stuffed critics were simply so starved for anything spandex-free that they mistook Judy for a gigantic breath of fresh air. Which is understandable. It truly does blow.

The original print version of this article was headlined "Judy"