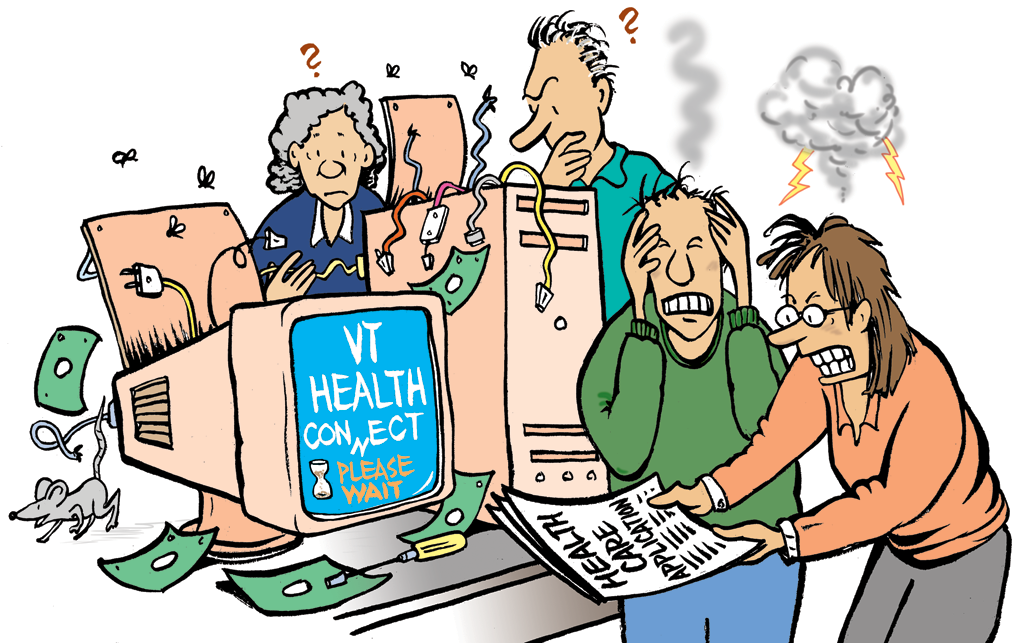 When the state of Connecticut was building its health insurance exchange, former Vermonter James Wadleigh was under the gun. As chief information officer for Access Health CT, the 1989 University of Vermont grad was largely responsible for the project's success — or failure.

Early in the development phase, Wadleigh made a decision that turned out to be wise: He decided the project was too large to complete in one year. He made a list of critical tasks, and by focusing on those, the technology contractor was able to deliver a system ready for testing by July 2013 — three months ahead of the October 1 launch date imposed upon all health insurance exchanges.

Even after being able to test it for three months, on September 30, "We were here all night," Wadleigh said. At 9 a.m. the next morning, when the exchange went live, "We had our fingers crossed."

Turns out Wadleigh's team did something right. The first phase, designed to be up and running for small employers and individuals, worked. And as they added more functions — such as an integrated online provider directory and financial reporting — it continued to deliver.

By contrast, Vermont Health Connect has disappointed since day one. Just last week an audit revealed dozens of past and present deficiencies. The state auditor reported some progress, but said that many risks remain that could derail plans to add critical functions this spring and next fall.

Gov. Peter Shumlin and his chief of health reform, Lawrence Miller, say the audit contained no surprises. But it did provide outside observers with new details about longstanding problems.

Take the persistent backlog of customer requests for changes to their enrollment documents, which peaked at 17,734 last October and stood at 7,256 in March despite extra staff hired to address it. The audit explains: "Staff augmentation and process improvements were not as effective in reducing the backlog as they could have been because of high error rates." Barely half the documents processed by some of the temporary staff passed quality checks.

The audit also noted that the lack of an automated renewal function for the fall open-enrollment period created another backlog; as of March 9, 7,360 applications were still waiting to be processed. Last week, state officials said the renewal backlog had been reduced to 4,877.

For customers, the report says, waiting in backlog limbo can mean incorrect or late bills for months of payments.

More than 54,000 applications have unresolved questions concerning eligibility for Medicaid or financial assistance with commercial insurance sold on the exchange. According to the audit, Vermont Health Connect has lacked the staff to resolve these inconsistencies.

The audit's long list of deficiencies includes a problematic premium payment process, dozens of year-old security weaknesses and the lack of a contract for automated renewal system implementation.

The next six weeks are pivotal in determining whether Shumlin's legacy includes a botched exchange. The governor is "cautiously optimistic" that Vermont Health Connect is about to turn a corner. But if that is to happen, a fast-approaching deadline must be met.

A long-promised automated change-of-circumstance function is due to be up and running on May 31. The function would allow staff and customers to bypass the current multistep manual process when altering applications. "This really has got to work," Shumlin said. Last month, he said that if it doesn't, it would be time for Vermont to consider joining the federal insurance exchange — or create a federal-state hybrid.

The May 31 target is a long shot, suggested the state auditor. Miller acknowledges the challenge, and tempered expectations late last week, saying that only staff would use the automated system to start. Customers would get to use it by midsummer.

Kevin Goddard, vice president of external affairs for Blue Cross Blue Shield of Vermont, confirmed the auditor's warning that the scheduling is tight. "We do feel the time set out ... is aggressive," he said, noting, "We are doing everything we can to help meet the deadline."

Another important deadline: The state must decide by November if it wants to join the federal exchange. "There is no need to do it earlier," Miller said, explaining that if the state wants to make the switch, officials at the federal Centers for Medicare and Medicaid Services said they would need to know in December. The switch can be accomplished in 10 months, he said.

"This really can't go on forever," said Goddard, who applauded the governor's call for Vermont to consider alternatives if the change-of-circumstance function can't be implemented. Lawmakers — even those in the governor's party — agree. And their patience is running out.

"The maddening thing about the exchange experience is that it's been a wildly costly, unmanageable, fix-as-we-go IT system that was supposed to automate basic bureaucratic functions and make things easier for government," said Senate Finance Committee chair Tim Ashe (D/P-Chittenden). The federal government made it difficult for any state to succeed in setting up an operating exchange on time, Ashe said, but the Shumlin administration created extra problems for itself.

"Governance of the project was ad hoc from the beginning and dizzying in its constant restructuring," Ashe said. "We did not secure our vendors' A teams. Most critically, people without relevant experience were relied upon to deliver an unprecedented product."

As disenchanted as lawmakers are with the exchange, some of them are still struggling to find alternatives.

"We might give you slippage into June, but if you are beyond that..." Senate Appropriations chair Jane Kitchel (D-Caledonia) warned Miller when he stopped by her committee room last Friday afternoon.

"If we miss another deadline, my confidence is completely gone," House Speaker Shap Smith (D-Morristown) said. Senate President Pro Tempore John Campbell (D-Windsor) said he planned to meet with Smith this week "to discuss what our options are if that work isn't completed."

Miller said that if Vermont Health Connect stumbles again at the end of May, a team would be assigned to develop a contingency plan. "We are looking at what those contingencies could be."

Campbell said the state lacks good choices. "I certainly don't want to go out and be part of another experiment," he said. "If I am going to support something, I want assurances it will be functional."

Smith acknowledged the challenges of making a switch but said, "My point about the May deadline is, I think it is really difficult asking Vermonters to continue to have faith we are going to get it right."

What about ditching Vermont Health Connect for the federal option? It "isn't very attractive, or we would have already pushed that button," Shumlin said. The federal exchange would be more expensive for Vermonters and wouldn't offer the extra subsidies the state exchange provides, he said.

He also said that a pending decision by the U.S. Supreme Court could "pull the rug from under any state that goes on the federal exchange" by eliminating the federal tax credits that help customers pay their insurance premiums.

Republican Lt. Gov. Phil Scott, a critic of the administration's handling of the exchange, has put some options on the table. A few weeks ago he invited Sens. Kitchel and Ashe to join him for a meeting in Rhode Island with exchange officials from the Ocean State and Connecticut. "I've long talked about, is there some way we can work together with someone?" Scott said. Of Connecticut's success, he said, "I think there are some possibilities of them assisting us in some way."

Collaboration is the buzz in the exchange world, Wadleigh said. He attended the meeting with Scott, Kitchel and Ashe, and also an April 2 forum in Denver on shared services for states that set up their own exchanges. "The goal of the meeting was to begin interstate discussions," he said, adding, "Vermont was represented."

As for helping out his home state with its struggling exchange, Wadleigh said, "There are a few areas that I see the New England states working together on, but at this time it is premature to discuss those areas."

Ashe came back from the meeting with some concrete ideas. "Call-center operations, which are a substantial portion of the ongoing operating costs, are a prime area for joint procurement to reduce spending," he said. Ashe also mentioned the price of software: "Joining forces with other states to lower licensing expenses seems an obvious direction to head in."