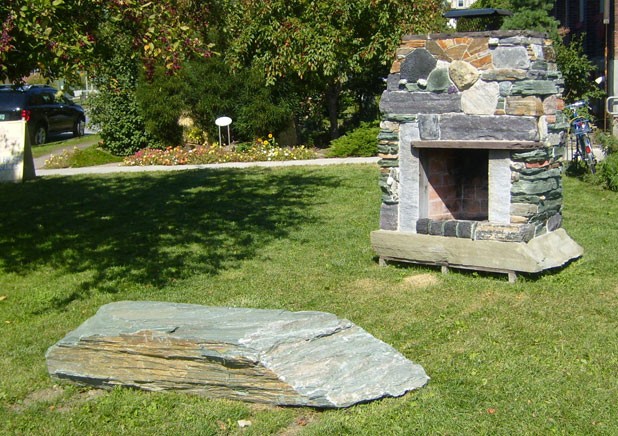 Maine-based husband-and-wife artists Adriane Herman and Brian Reeves did an admirable job as jurors of this year's South End Art Hop. Not only did they put together an interesting "Jurors' Selections" exhibit within the Juried Show (about 15 percent of entrants made the cut), but their picks as prize-winners were, for the most part, reasonable. The couple laid an egg in the outdoor sculpture category, but other than that did pretty well.

Herman and Reeves seem to like highly detailed indoor pieces. This year's Honorable Mention among those works went to Xavier Donnelly's obsessive 20-by-24-inch pen-and-ink drawing entitled simply "City." Donnelly is a Burlington teen who has exhibited previously at 215 College Artists' Cooperative. His works are like illustrations of a phantasmagorical Manhattan, rendered in a space that approximates three-point perspective.

Third prize was awarded to "Queen Elizabot" by ceramicist John Brickels of Essex Junction. It's plain by now that if Brickels enters a show, he's going to get a prize. Not content to rest on the laurels he's won by producing intricate broken-down barns and city buildings, Brickels has been exploring other ideas over the past few years. "Queen Elizabot" is a humorous robotic figure made from his signature fired yet raw-looking clay and with flashing radio tubes.

First and second prizes for indoor works went to Marie Davis of Burlington and John Douglas of Charlotte, respectively. Davis' "Virgo Moth" is another ceramic piece, but the polychrome bug doesn't look like clay. It's elaborately layered, as if it were an actual 2-foot-wide specimen. Photographer Douglas' "Capital Security" is from his series of nude, gun-toting self-portraits. Dozens of clones of the white-bearded artist appear in the 40-by-48-inch digital print, each of them armed with an M-16 and vigilantly protecting the Vermont Statehouse. Hapless little bodies appear scattered behind him.

While there were nearly 200 entries among the two-dimensional works, Herman and Reeves had only about a dozen outdoor sculptures to choose from. The Honorable Mention went to John Housekeeper's steel "The Pedestula," a group of four rusted steel posts of various designs positioned at 12, 3, 6 and 9 o'clock around a taller central post. If it hadn't been placed in the shade, it would have made a very nice sundial. Third place went to Steve Conant's 7-foot-tall, cannon-like "Steam Punk Illuminator," located in front of Conant Metal and Light on Pine Street. James Irving's bouncy "Wishbone," a playful crowd-pleaser at Lake Champlain Chocolates, got second place.

First prize for outdoor sculpture was awarded to "Sundown Relax" by Forrest White. If it looks like a stone fireplace, that's because it is. White's business in Williston is called Plant and Stone, and his prize-winning "sculpture" is described on his website as an "outdoor Rumford fireplace." Perhaps in the future the Art Hop should create a third category, for design and commercial art? White is clearly an expert stonemason - the 3-and-a-half-ton fireplace composed of at least seven kinds of stone is an impressive piece of work.