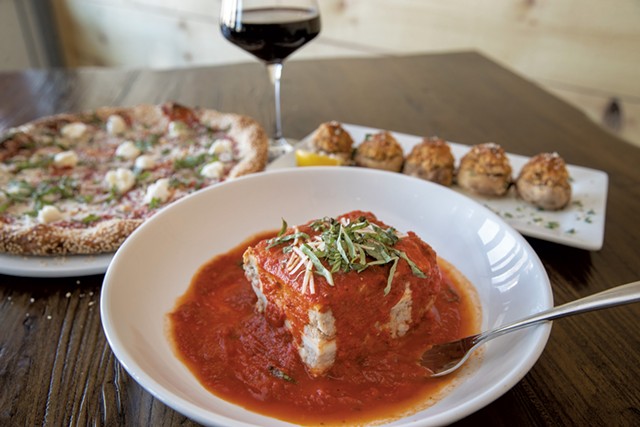 When Bogdan Andreescu, owner of Jr's Original in Winooski, opened Jr's Williston in October 2021, he told Seven Days, "I'm just that crazy kind of guy who needs projects all the time." Less than a year later, he's working on another one: opening a sports bar beside his pizza-and-pasta spot by July 1.

Though adjacent to Jr's, the 40-seat bar will be separate from the restaurant, which will continue to serve Italian and Italian American specialties. The as-yet-unnamed bar will offer 24 draft lines and serve its own menu of pub-style food, such as an eight-ounce sirloin burger on a housemade bun, salads and vegetarian options.

Appropriately for a sports bar, Andreescu expects to put "lots of big TVs everywhere," he said, "but they won't be blaring." The space will also feature comfortable lounge seating, pool tables, arcade games, foosball, and a rentable private theater room with an 85-inch TV.

"I see places like Buffalo Wild Wings and all the other competition that don't have a nice lounge area where people can go and just relax," Andreescu said. "I want to create a nice environment for people to have fun, hang out, play pool and watch the game."

The bar will have a separate entrance from the restaurant, but the same kitchen will serve both spots.

"I built a larger kitchen when I built Jr's Williston, because I was thinking about expanding eventually if things went well," Andreescu said. "Luckily, it's going really well."