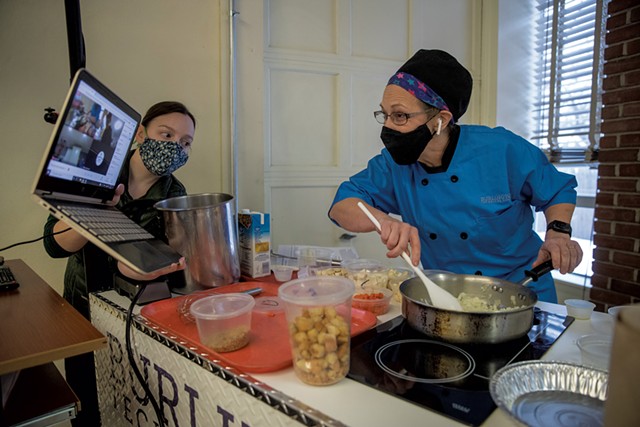 The church has provided a temporary home to the Burlington Technical Center's culinary arts program and the district's afterschool cooking activities while the high school addresses cancer-causing chemicals found on its campus. But wherever they take place, the district's cooking extracurriculars would normally involve months of recipe development and practice runs by teams preparing for the annual Jr. Iron Chef VT statewide culinary competition, now in its 14th year.

"It's quite useful knowing how to cook." August Simakaski tweet this

In a normal year, the teams meet mid-March on a Saturday at the Champlain Valley Exposition in Essex Junction and cook under a time clock while upwards of 600 spectators watch. The huge hall buzzes with excitement, energy and mouthwatering aromas as the teams slice, dice, sauté and simmer their way to titles such as the Crowd Pleaser or the Lively Local. 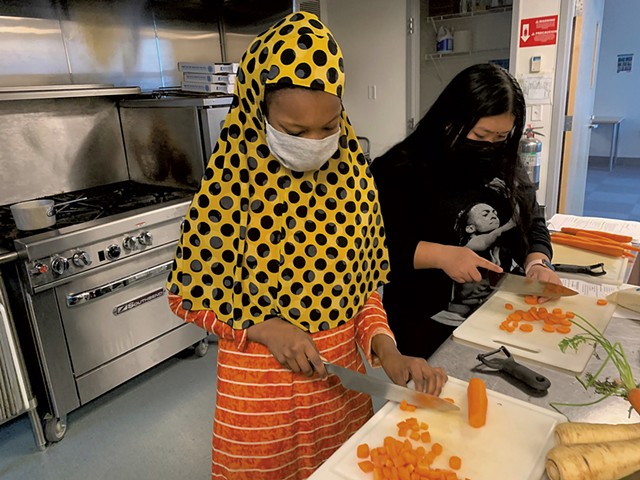 This year the hall is dark, but the nonprofit farm-to-school partnership, Vermont FEED (Food Education Every Day), that organizes the competition has launched a cooking club instead. The monthly recipe challenge aims to keep young Vermonters cooking healthy, locally inspired food.

In 2020, Vermont FEED made an 11th-hour call to cancel the March 14 competition due to rising cases of COVID-19.

"It was pretty heartbreaking for a lot of the kids," acknowledged Jr. Iron Chef VT co-coordinator Kerrie Mathes.

When it became clear last fall that there would be no large events this spring, either, Vermont FEED came up with the cooking club, which launched in December.

The goal of the club underscores the competition's original mission. "The idea is to challenge middle and high school students to really become engaged in cooking and their own health and the health of their families and school communities," Mathes explained.

She selects club recipes from past winners based on ease, seasonality of local ingredients and reasonable cost. Vermont food and cooking experts, including chef Alganesh Michael of South Burlington's A Taste of Abyssinia and Ben & Jerry's flavor guru Sarah Fidler, have contributed to a video series of cooking tips and other advice. Local businesses have donated culinary prize packages that are awarded each month via a random drawing.

About half of the 60 participants to date are cooking solo or with their families at home. In Burlington, the school district and the King Street Center are using the recipes in their afterschool programs. New members can sign up at any time through the final month of April.

On February 15, at a portable cooking station set up in a corner of the St. Mark's general purpose room, Burlington Technology Center culinary arts instructor Cheryl Niedzwiecki was prepping for a video-chat cook-along of the month's recipe: root vegetable pot pie with cheesy mashed potatoes and Parmesan croutons. The recipe was a 2017 competition winner from the Vergennes Union High School team.

Sheryl Haiduck, Burlington High School's afterschool site director, had delivered the recipe ingredients to six students and was expecting one to participate in person.

That student didn't show up, the video camera refused to connect to the laptop, and only two participants dialed in online. But the demo went on as planned with Abby Mitchell, 16, and Duncan Shaver, 12, following along attentively from their home kitchens. 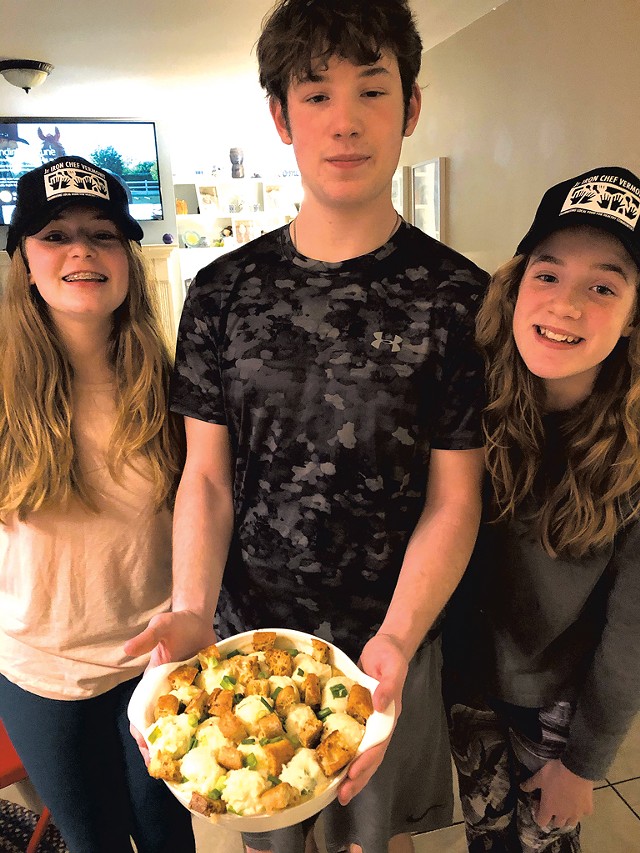 Niedzwiecki juggled pots and spatulas with ease and offered a steady patter of advice and encouragement. She stuck a fork into a boiled potato to illustrate that "fork tender" means "it goes right through" and explained that knobby, gnarly celeriac "smells like celery, tastes a little like celery and it's grown right here in Vermont." To show the difference between a simmer and a boil, Niedzwiecki used perfect hand gestures: gently waving fingers versus hands rotating briskly around each other.

Now a sophomore, Abby competed in Jr. Iron Chef VT as a seventh grader and had joined one of the high school teams for the 2020 competition.

In a phone interview after the February cook-along, Abby said she loves to cook and really enjoys working with others to develop and perfect a recipe. "When we were done," she recalled, "it was like, Wow, together we made this."

Her team of two ninth graders and two seniors worked hard last year with "Chef N," as students call Niedzwiecki, to create a spinach salad with roasted chickpeas, beets and sweet potatoes. They were crushed when the competition was canceled.

"When they said you could [cook] virtually, I was very excited," Abby said of the cooking club option. She credits Jr. Iron Chef VT with broadening her culinary horizons. "It's kind of opened me up to local ingredients and eating plant-based."

Her family enjoyed the root vegetable pot pie she had most recently cooked with Niedzwiecki's virtual guidance. "They liked the parsnips," Abby said, sounding a little surprised. "We don't eat a lot of parsnips."

The Jr. Iron Chef VT team from the King Street Center felt the same letdown as Abby's team last year. They had developed a recipe for a traditional Nepali snack made with potato, cucumber, red cabbage, chile and puffed rice; it reflected the heritage of several team members.

Three of the 2020 King Street chefs — 13-year-olds Astha Magar and Menuka Monger, and Neeha Rai, 14 — are among those currently doing the cooking club at the center with education director Deena Murphy.

Taking a break from making the pot pie on February 19, Astha reflected on last year over video chat. "It was kind of disappointing. We were hoping to do the competition, but then the COVID hit," she said. "I want to share our culture's food. Spicy tastes the best."

On pot pie day, the three teens worked smoothly together, chatting and laughing, along with Hawa Aden, 13, another King Street cooking club regular. Hawa and Astha carefully chopped a mound of carrots. Then Hawa joined Menuka at the stove, while Neeha and Astha mashed potatoes with milk, butter, scallions and sharp cheddar. Hawa savored a spoonful of potato and proclaimed, "It's 100 percent out of 100."

In addition to the pot pie, cooking club participants have so far cooked King Street Center's 2018 green curry and the Lake Champlain Waldorf School's 2018 vegetable dumplings. The March recipe — sweet potato-chickpea burgers with Caribbean slaw and Vermont maple barbecue sauce — is a 2019 winner by a middle school team from Chester's Green Mountain Union High School. (See Home on the Range for the recipe.)

Even club members cooking at home without friends or guidance from a culinary instructor seem to be getting a lot out of it.

In Essex Junction, the Bruneau siblings — Andrew, 16, Emilie, 14, and Lily, 11 — collaborate. Because they attend in-person high school and middle school only two days a week, they have more time to fit cooking into the schedule. Their mom, Lauren, heard about the club through a newsletter from Shelburne Farms, a Vermont FEED partner along with the Northeast Organic Farming Association of Vermont. "The cooking has been a real blessing," she said. "They're excited about the challenge." 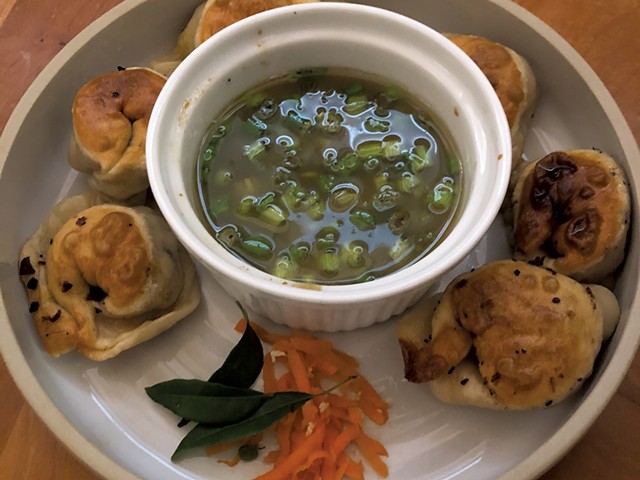 For the dumplings, Andrew, an experienced cook who has taken some culinary classes at Essex High School, made the dough while his sisters made the filling. They were hard to stuff neatly, Lily allowed, but they were good to eat.

The siblings agreed that they weren't sure whether they'd want to do the actual competition. "It seems like it could be stressful," Andrew said. The family is fully on board with the cooking club, though.

"I like having them pick out the recipe for us," Emilie said. "It's usually something we wouldn't normally pick." Her sister added, "It's fun because you can win stuff."

Another upside of the club, Jr. Iron Chef VT co-coordinator Mathes noted, is that it's pulling in youngsters who might not participate in the competition for a variety of reasons.

Twelve-year-old August Simakaski of Peacham said he had heard about Jr. Iron Chef VT but had been too young to join a team. "I've cooked since I was old enough to help: like, 5," he said. "It's quite useful knowing how to cook."

The young cook, who is homeschooled, has liked every challenge recipe so far, though the dumplings were his favorite. "They were fun to make, and they tasted really good," August said.

He has fun taking the photos, too, and seeing how other club members' recipes turn out. August's photo of the Thai-style green curry features a neatly molded mound of rice and generous basil garnish. "I made sure to make them look really fancy," he said.

When he cooks dinner, August added, "My mom loves it. She always thinks it's better than her food because she doesn't have to cook."