Joshua Panda, What We Have Sewn 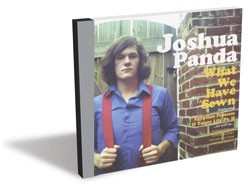 Joshua Panda is one offbeat dude. From his cutesy ursine sobriquet to his disheveled but classic sense of style — typically involving suspenders, Ray Bans and a pork-pie hat — everything about the guy screams “quirky.” Except for his voice. There is nothing quirky about Joshua Panda’s voice.

The dulcet tones that resonate from the man’s presumably velvet-lined throat are stunning. Whether onstage at a nightclub, busking on a street corner or on record with his solo debut What We Have Sewn, every breath he draws into his considerable pipes baits anticipation. And every note that follows commands the listener’s attention.

The album begins with “If I Had a Balloon.” It is a breezy little ditty, sweet and innocent almost like a children’s song — an aesthetic played up by ragtime piano and slide whistle. In less capable hands, the song’s wistful romantic tone might reek of schmaltz. But Panda’s easy charm is irresistible. When he croons, “We could live on holiday, if only in our hearts,” you believe him.

“Carmen’s Lullabye” begins to heat things up. “I’m gonna start slow, ease my way in / listen to you speak to your skin,” he intones over a steamy soul groove. A vocals and horn call and response evokes a classic Stax/Volt feel.

Panda again indulges playful sexytime doubletalk on the following track, “Vineyard Love Song.” “You and I are two grapes on the vine / and when our skin collides, our souls merge and combine / to make the sweetest wine.” It’s a tender sentiment, softened further as Panda cheekily wonders what might become of his love should he become, of all things, a raisin.

“Diamonds in the Sand” changes the album’s course in both style and mood. The ethereal, piano-driven torch song offers a glimpse at an edgier side of Panda’s oeuvre — though the song’s industrial atmospherics tread eerily close to those found on Wilco’s “Reservations” from Yankee Hotel Foxtrot.

“Taiger Lily Pt. I” marks a return to (relative) normalcy with a sinewy — and at times sinister — roadhouse swing.

The remainder of the record continues in similarly idiosyncratic fashion, from the harpsichord-fueled “When You Laid Me Down” to the lulling acoustic roll of “Over My Head” to the loping back porch sing-along of album closer “Buttermilk Holler.” But whether he’s sweetly crooning as on the delectable country waltz “Crazy ’bout Rue” or tearing it up on the funk-soul scorcher “Egyptian Princess,” he imbues each tune with a singular, um, “animal” magnetism that could only be called Panda-esque.

Catch Joshua Panda at the Lamb Abbey in Montpelier this Friday.