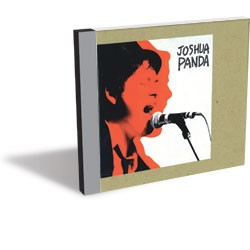 If there were any question left unanswered by Joshua Panda’s solo debut What We Have Sewn, it was whether the Burlington-based vocalist could evolve into a songwriter whose craft equaled his unique vocal talents. It’s a tall order, particularly given Panda’s prodigious pipes. Not that the song craft on his freshman effort was lacking. But what prevented that record from being transcendent, as opposed to just very, very good, was that Panda occasionally favored showy bluster over substance and focus — a common trap among young, naturally ultragifted singers. It’s a forgivable transgression, especially when one exhibits so much tantalizing potential. On his self-titled sophomore album, Panda reveals remarkable maturation, and narrows the gap between his dynamic vocal chops and compositional prowess.

“Masquerade” sets the record’s weightier emotional tone in a triumphant burst of piano, accordion and bright guitar that quickly descends into a brooding, midtempo march. Panda is coolly restrained as he warns, “When the game is over, and all the cards have been played / the joker masquerades as the ace of spades.” These first few minutes of the album reveal what’s most impressive about Panda’s growth. I’m reminded of that old carpentry axiom, “Let the hammer do the work.” The gist, of course, being that you don’t need to swing hard to drive a nail home. It seems Panda has learned a similar lesson. His refined delivery reveals a willingness to let his words bear their due weight, rather than forcing the issue with vocal acrobatics. Panda hasn’t abandoned his trademark wails and moans, but a more judicious use of this lethal weapon makes it more gratifying when he unholsters it — as in the jaw-dropping finish of “Masquerade.”

Panda has again surrounded himself with a sterling cast of supporting musicians. In particular, multi-instrumentalist Joe Grass plays almost as important a role in shaping the album’s tenuous balance between R&B and Americana as Panda himself. Grass’ work, whether on guitar, steel guitar, mandolin or banjo, is immaculate and tasteful. Guest vocals from local alt-country troubadour Lowell Thompson are a pleasant surprise as well.

But, ultimately, this is Panda’s show. You’d be hard-pressed to find a more compelling front man in Burlington at the moment. And, even given the leap he’s already made, it’s safe to say Joshua Panda is just getting started.

Panda celebrates the release of his new album this Saturday, August 28, at Nectar’s.