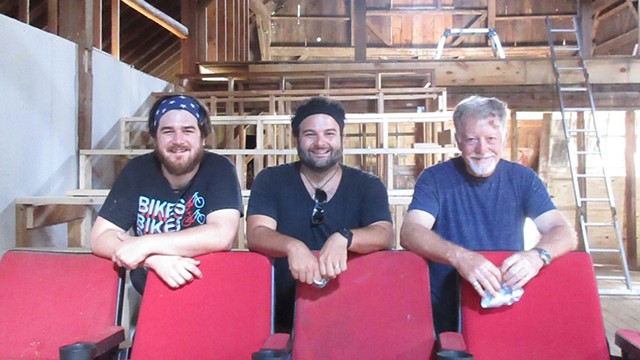 The pandemic cannot bring Joshua Collier down. The jocund tenor and founder of Barn Opera admits he had to cancel the small Brandon company's entire third season of four full-length operas. And he laments that the coronavirus has taken away singers' "entire industry, their artistic outlet and their financial security." Nevertheless, Collier is all about the unexpected opportunities.

Are opera singers marooned in their homes around the world? Perfect. Collier tapped 54 of them to produce audio recordings of full operas. Called the Social Distance Opera, the project had singers located from California to Europe to South Korea record their parts while listening to the same piano accompaniments. Collier and his assistant director, Nicholas Tocci, a baritone, mixed them.

The project launched on August 22 with a release of Mozart's Don Giovanni, and the website promises five more operas, to be released over five weeks. All are free to listen to, and any donations will be split evenly among all the artists.

"I can't fix [everything], but they get to sing. It's hard to overstate the importance of that," Collier said while sitting on the patio of his home on Pearl Street during a Seven Days visit.

Meanwhile, local singers need work, so Collier has scheduled some of the first opera concerts in Vermont since the pandemic started that will feature live singers, without microphones, in front of a live audience. Strict safety measures are planned, including a distance of 20 feet between performers and audience.

The concerts will showcase eight singers, including Collier, Tocci, soprano Helen Lyons of Ferrisburgh and the Pittsford-based couple Kasey King, a soprano, and Mason Jarboe, a baritone. (The remaining singers are coming from safe counties in Maine and New Hampshire.) On Thursday, September 10, they'll sing a program of opera arias and musical theater favorites in the barn at Isham Family Farm in Williston; on Saturday, September 12, they'll perform on the lawn at Estabrook Park in Brandon.

Finally, why let an uncertain future delay planned renovations to Barn Opera's new home? The company purchased a circa-1850 barn in August 2019, settling on one across the dirt road from Collier's house after he had explored and tested the acoustics of nearly 50 barns. (Bonus: The approach from Brandon's picture-perfect town center requires driving through a covered bridge.) The company had lined up a contractor and secured permitting by early March. Then the pandemic struck.

With contractors addressing a backlog of bigger jobs, Collier, Tocci and technical director and project manager Russ McColman took on the renovations themselves. The trio has repositioned massive wooden beams while standing on ladders, framed outside rooms and turned a hayloft into a balcony.

During the visit, Seven Days was struck by the amount of work the former dairy barn, next-door horse barn and grounds still require. But the two singers and experienced carpenter were indomitably cheerful.

"It's not as much work as you would think," McColman said, pointing out 42 rooftop solar panels already installed on the horse barn, which will become a green room for performers. Gesturing at the overgrown grounds, he described the proposed entry drive past a roofless silo to a parking field and a return footpath along the base of a rock ledge hidden by trees.

"It's going to be a really beautiful little jewel box of a theater." Joshua Collier tweet this

The building's entry points — two sets of large, slightly askew, swinging barn doors — are to be rehung as sliding doors, said Collier. Audiences will emerge at intermission to enjoy a propane fire pit ringed with benches in the circular Founders' Garden, defined by the concrete base of a former silo. A Founders' Wall nearby will list the names of major donors, who number 13 so far; each has contributed $10,000 or more to the barn's purchase and restoration.

"It's going to be a really beautiful little jewel box of a theater," Collier enthused.

Inside, the construction crew has framed out risers on the original oak floor that will support plush red seats — rescued from a dismantled cinema in Manchester. The barn's total seating capacity of 110 is double what the company had at its former home at Brandon Music, which is housed in a different barn, owned by Edna and Stephen Sutton. (The couple cofounded the nonprofit Compass Music and Arts Center, of which Barn Opera is a project.)

The seating faces the empty floor at the front of the barn that will serve as the stage. No curtain is planned, and the orchestra "pit" is simply a space off to one side. Drywall to be installed between wall beams will better show projected supertitles, but in most aspects the rough-hewn look of the interior will remain, in keeping with the company's ethos of opera for everyone.

As Collier describes it: "Come in your jeans, drink some local beer. This is opera for people who live in the 21st century."

The optimistic director declares that renovations will be completed "before snowfall" and is planning a barn-opening event "as soon as it's safe" — possibly within four months. Whenever that happens, it will be another welcome opportunity for singers to demonstrate their significant training and for audiences to enjoy it, unmediated by screens.

"There's a lot of depression [in the singing world]," Collier noted. "My response to that feeling is to create."

The original print version of this article was headlined "Barn Free | Joshua Collier launches socially distant opera, online and outside"