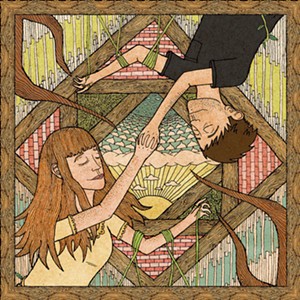 "I'm 29 and I feel like I've [been] living off of wasted time," writes Burlington musician Jonny Wanser on his website. "I'm done with saying I'm gonna do something then not follow[ing] through." After three years of work and enough scrapped material to fill three albums, Wanser comes through in a big way, tackling the mammoth topic of romantic love on his debut LP, Modern Pines.

The Queen City native earned nods from the likes of Vice for his series of mashup mixtapes released between 2010 and 2015. He's switched his focus to narrative songwriting for this concept record, which was produced, mixed and mastered by Wanser and Jer Coons at Future Fields in Burlington.

The album's 11 songs take listeners through the chronological stages of a fictional boy-girl relationship. The story begins with "None to Bare," which introduces a protagonist struggling to settle into the single life: "I wish they'd tell me that it's gonna be OK." Wanser also establishes the electronic drum, synthesizer and acoustic guitar sounds — all performed and recorded by Wanser in his home — that carry through the record.

"Push Me Over," the album's lead single, summons the feeling of last call at the disco — it also signals last call in honeymoonland for the character and his newfound love. Feelings of jealousy and possessiveness seep in, manifesting in a thoroughly modern way: "There's nothing I can do when I'm sleeping all alone and I'm creeping on your phone." Partway through, an electronic drumbeat builds tension before giving way to the synth-riff sister of Stevie Nicks' "Stand Back" — possibly an homage to another songwriter who has examined intimacy from almost every angle.

Wanser, whose Bandcamp bio reads "Number 1 Sad Boy," seems to be in touch with the range of human emotions. He uses both music and lyrics on Modern Pines to make sure the listener feels them, too. In "Burn With You," Wanser pinpoints the rush of connecting with someone who's perfectly on your wavelength, singing, "I'm like a fish outta water 'til your eyes wash over me."

Sometimes the feelings are painful. On "Break My Head," a staccato chant of "Hey. Ho." punctuates the chorus, mimicking the terse tone that couples can take with each other in close physical and emotional quarters. The frustration is palpable.

Later in the album, song titles such as "You're the Worst" and "Leave Me Alone" make clear where this story is headed. On the closing number, "Let You Go," Wanser croons, "I think I'll be OK," mirroring lines from the album's first song and returning his main character right back where he started. And maybe he'll do it all over again, because why the hell not? Love hurts, and habits die hard.

Modern Pines will be available at jonnywanser.bandcamp.com on Sunday, May 27. Catch Jonny Wanser with Hit Bargain and OSABA on Monday, June 18, at Ninety-Nine in Burlington. Email hopealliswellpresents@gmail.com for location details.