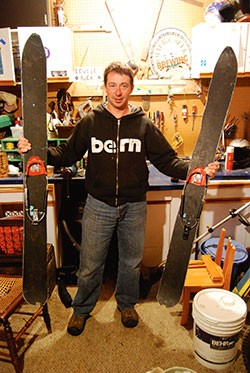 It’ll be at least three weeks before the first ski lifts start spinning in Vermont. So why is Dave Bouchard, an avid telemark skier from Hinesburg, keeping a close watch on the mountain weather now? Because, first of all, he doesn’t need lifts to get up the slope — his legs propel him just fine. And, second, he barely needs snow to get back down. With a pair of junkboards strapped to his feet, Bouchard can sample the first turns of the season with just a peach fuzz of frost between him and the ground.

Bouchard, a 40-year-old elementary school teacher, first read about junkboarding four years ago in Skiing Magazine. The crude planks are a tinkerer’s response to a simple question: What’s the best tool for skiing over dirt and weeds made slippery by a thin dusting of snow? Conventional skis tend to be too narrow to allow a skier to float over the rough surface, and their edges will unexpectedly bite into the ground, causing all kinds of painful crashes. You want something short and light — for easy maneuverability — yet also wide and stiff, for flotation and control. It turns out that a junked snowboard, split down the middle with a table saw, has all the right elements.

Bouchard and a friend, both keen to get a jump on the season, promptly acquired some old snowboards and repaired to Bouchard’s garage to begin the surgery. The boards bucked and protested as the saw chopped through graphite and fiberglass. “It wasn’t pretty,” Bouchard recalls. Nor was the result: Spray-painted black, the skis have uneven sidewalls, and their tips and tails are freehand approximations. But they looked decent enough to give Bouchard and his friend some hope.

To solve the edge problem, they decided to make outside edges from the middle of the board — that way, the ski would be apt to smear across the snow instead of digging into the earth. Then they needed to figure out a way to mount the telemark bindings. Regular skis have special inserts for that purpose. Drilling screws into the soft base material of a snowboard would produce disastrous results, as the bindings would probably rip out once put to the test. Bouchard settled on countersunk T-nuts, which turn the ski into a sort of binding sandwich with the circular washers protruding on the base of the boards. “You know, they’re old, junky boards,” Bouchard says, “so it doesn’t really matter.” The system hasn’t failed yet.

Bouchard and a few of his buddies rack up about 10 days a year on the junkboards at Mad River Glen, Sugarbush and Stowe, both in the early season and long after the mountains have closed for the summer. But it’s the beginning of the season that’s most important, Bouchard says. There’s no ideal way to get the legs in shape for telemark skiing, but a few days of junkboarding can be a good primer. And when the snow starts to pile up, Bouchard is ready. “When you can say, ‘I started making turns in October,’” he points out, “it makes all the difference.”

On a recent evening at the Bouchard household, Dave’s mother is visiting from Connecticut. She’s never heard of junkboarding and had no idea her son was skiing on fast grass. “I don’t want to know,” she says.

Her reaction is typical. “Most people just think it’s frickin’ dangerous,” Bouchard says. He’s taken his fair share of spills, tearing pants and returning home muddy, but he stresses that he and his friends don’t go fast enough to get badly injured.

For those who want to give junkboarding a try, Bouchard has a few words of advice. First, find a snowboard that’s longer and stiffer than average — say, 155 centimeters. Next, choose your terrain wisely: Freshly mowed blue-square trails are perfect, since black diamonds tend to be too steep and rocky. Use stiff boots, keep your feet light and fast on the snow, and stay centered on your skis, as slow patches can hurl you headlong. “As far as maintenance and care,” Bouchard says, “there’s none.”

To watch Bouchard and his friends on their junkboards, click here.