At 14 years old, Keller Greene can't vote. But when he's old enough, the Fairfax teen will be ready, thanks in part to the Good Citizen Challenge.

In the 2019-20 school year, Keller and four of his friends at Bellows Free Academy Fairfax completed the Challenge — a youth civics project organized by Kids VT and Seven Days and supported by the Vermont Community Foundation. Calling themselves the Good Citizens Club, the group met after school twice a month at the library. The members read books, listened to an episode of Vermont Public's "Brave Little State" podcast, played a video game about gerrymandering, and interviewed a reporter from the Saint Albans Messenger and Rep. Barbara Murphy (I-Fairfax).

Club members completed that year's Challenge in March 2020, right before the pandemic hit and school shut down. Instead of breaking up, they kept going — sometimes meeting virtually — all through their middle school years. They worked on activities they found through the Challenge and improvised their own. The club's final activity before its members moved up to high school was a May trip to the Statehouse in Montpelier, where they saw the Vermont legislature in action.

Keller, an athlete who plays basketball, football and Ultimate Frisbee, wasn't initially drawn to the club because of its mission. In a Zoom interview in June, he said he got involved because his friends were doing it. But once he got started, he really enjoyed it. "I stayed in it because it was a way to get into the community and help the community ... It was a way to give back," he said.

Keller admits that before he joined the Good Citizens Club, "I didn't know much about politics or civics or any of that stuff." He said he learned a lot, especially from the hands-on tasks, such as volunteering at local nonprofits: "It just, like, opened my eyes that I can help."

He discovered that, even as a teenager, "I can do a lot."

That's exactly the outcome club organizer Alice Scannell was hoping for. Scannell, a licensed social worker and clinical supervisor in Howard Center's School Services Program and a part-time faculty member at the University of Vermont, initially planned to do the 2019-20 Good Citizen Challenge with her then-sixth-grade son, Elliot. But then she decided to help his friends attempt it, too.

Having a structure in place made it doable for her. "You laid it out so well," she said of the Challenge. "Just the categories and the different activities and the options that they could choose — you just did the work." Scannell recruited the kids, found a space where they could meet and used the Challenge as a curriculum to guide them.

The club's work took on a new urgency after COVID-19 arrived. In the early days of the pandemic, club members collected donations of paper products for the local food shelf. "Everybody was shut up in their house," Scannell remembered, "so we wore masks and just drove all around town and picked up stuff."

The middle schoolers baked treats for essential workers in town; they dropped off cookies for employees of restaurants, convenience stores and auto repair shops. After the club made cards for local seniors, one of the recipients called the school, and Scannell got the message. "I called him, and he's like, 'I just want you to tell your students that this made my day,'" she recalled.

Over the years, club members also volunteered and collected donations for organizations including Franklin County Animal Rescue, the U.S. Committee for Refugees and Immigrants, and NorthWest Family Foods, a food pantry serving Franklin and Grand Isle counties. The food shelf praised the club on its Facebook page: "The curious group of seventh graders from Fairfax, Vermont, came and worked on restocking shelves, making bags, cleaning vans, asking questions! It was a beautiful day to witness, and be a part of ... Thank you to our Good Citizens!" 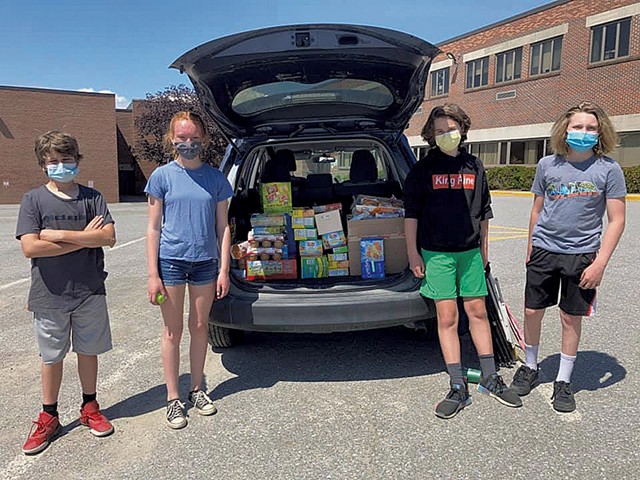 Probably the most complicated activity Scannell and the club attempted was organizing a school board candidate forum last March. The group sought questions from the public via social media and Front Porch Forum. During the virtual forum, the students asked candidates how they would address teacher morale, staffing shortages, the state of aging buildings and raising the Black Lives Matter flag — as well as how they'd respond to people who disagreed with them.

Scannell said the students showed up for the event "ready to speak to any of the candidates and consider different perspectives, which was great."

They held the forum on Zoom and promoted it via social media and Front Porch Forum. At least 50 people logged in, and more likely watched the recording afterward. "We got so much positive feedback from the community," Scannell recalled, notably from people on opposing sides of many of the issues. One thing they could all agree on: The teens provided a valuable public service. "I just loved that," Scannell said.

She encourages other parents and teachers to embrace the Good Citizen Challenge and start similar groups at their schools. There have been several iterations of the Challenge since the first one in 2018, and all the activities are archived at goodcitizenvt.com.

Keller recommends the Good Citizen Challenge to his peers. "Anyone that's thinking about joining a Good Citizens club or is on the fence — you should do it. You'll learn a lot, and you feel good," he said. "I think everyone should do it. It changed me for the better."