John Townsend, 'Bound to Be' 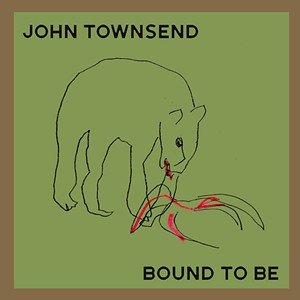 The death of a close friend inspired Burlington singer-songwriter John Townsend's 2019 debut solo LP, Seattle Songs. "The songs here are remarkable," wrote Justin Boland in a review for Seven Days, "located squarely in the raw space between grief and celebration."

On his latest album, Bound to Be, released at the end of 2020, Townsend tackles a new set of weighty topics. "I'm musing about missed opportunities, lingering potential and appreciating what's always been right in front of me," he wrote in an email. The focus of Bound to Be is different from that of its predecessor, but the final product is just as powerful.

Townsend's specialty as a composer is creating a slow burn. On the album's title track, he chooses to build atmosphere piece by piece rather than start with a bang. Gently picked acoustic guitar notes usher in Townsend's soft vocals; then come light percussion, bass, electric guitar and musical saw. The gradual addition of instruments pushes the song to an elegant peak that packs emotional punch. Think of it as an exercise in delayed gratification.

Townsend plays most of these instruments himself, but he calls on longtime collaborator Matthew Saraca for some background vocals, bass and keys. His dad, Peter Dotson-Westphalen, plays bass on five tracks. Johnnie Day Durand bows the aforementioned musical saw.

Durand's performance lends an air of spookiness to Townsend's light folk-rock songs. It may also inspire listeners to check out Silver Bridget, an instrumental cover trio composed of Durand, Saraca and Townsend.

If they were purely acoustic, some of Townsend's arrangements could border on innocuous. However, his Stratocaster comes through in all the right moments, imbuing the mellow and melancholy numbers with texture and mood.

"Wood to Burn" stands out both musically and lyrically. In addition to a gorgeous ambient instrumental outro, the album closer features stick-to-your-ribs lyrics, such as, "I always knew it'd come to this / Only one place left to turn / But a lot of good wood left to burn."

Townsend's voice isn't the stuff arena-rock wailers are made of, but it suits his light folk stylings. Shades of Crosby, Stills, Nash & Young carry through the vocal harmonies on tracks such as "The Storm."

Packed full of subtleties, Bound to Be is best absorbed through headphones. Press "play" and experience the soft ebbs and flows of this tasteful and touching album.

Bound to Be is available at johntownsend.bandcamp.com.

Speaking of John Townsend, Bound To Be