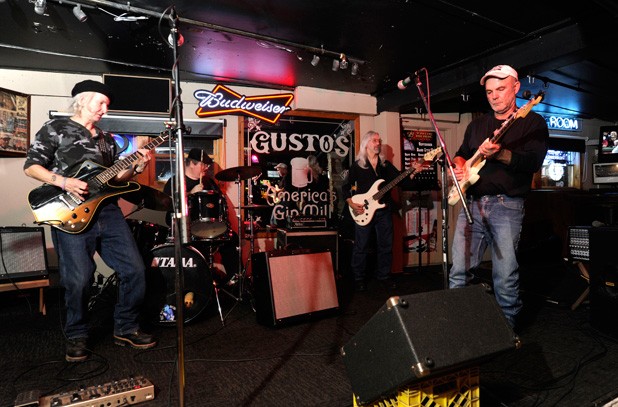 It’s a Wednesday night at Gusto’s, Barre’s venerable neighborhood pub/entertainment complex. It’s quiet at the bar. But near the stage at the back of the room, things have started to percolate. The drum kit and PA are set up, and the amps hum quietly under a couple of red spots. On the sidelines, a cluster of musicians exchanges handshakes and enthusiastic greetings. It’s time for John Lackard’s weekly open mic jam session, a musical stew of blues and blues-based rock. Here, people come to get their ya yas out, launch musical careers and maybe even find a little salvation.

John Foster, 61, paces the stage with the anticipation of a bird dog waiting to be let off the leash. His Hendrix Strat strapped on and plugged in, he throws out some greasy pentatonic runs, chops out some chords and chats with his temporary bandmates — a drummer, a bassist and another guitarist — as they mount the stage. Finally, Foster flips his white baseball cap backward, screws it down tight and lopes into Creedence Clearwater Revival’s “Born on the Bayou.” Instantly, he is transformed.

Over the next half hour, Foster sings and shouts, struts and solos — sometimes smoothly, sometimes not — through a half dozen blues and blues-rock standards, anchored by the quartz precision of Paul “Dr. Smooth” Hislop’s drumming and Lackard’s bass, and swapping leads with guitarist Claudia Babral. For Foster, it’s a rare moment in the spotlight, and it’s something he and a small coterie of central Vermont blues lovers return for week after week.

Lackard, 56, whose blues bands have been a Vermont staple for decades, says the jam got its start because people simply wanted to play. “My band had a gig on Thursdays in Rochester at the Silver Tooth Pub,” he says. “People would show up and want to sit in. Later, the same thing happened at Charlie-O’s in Montpelier.” Over time, a model formed. Lackard — with long white hair, aviator wire rims and a laid-back demeanor — would show up hauling a PA, a bass guitar, a couple of lights and a drum kit. Anyone who wanted to join him was welcome.

Since then, Lackard’s jam has been a bit of a rolling stone, settling for a time in Chelsea and another Barre location before moving to its current one at Gusto’s. And if the crowd is a bit less than diverse — tending toward white males in their fifties and sixties — the reasons for showing up at the gig are varied and often deeply personal.

Foster, a self-described “Army brat,” spent his childhood in Germany, he says, feasting on rock and blues hits broadcast over Radio Luxembourg. It’s been a long and sometimes difficult journey from there to central Vermont, Foster acknowledges.

“It’s good for me to get out,” he says. “And when I’m up there and people are diggin’ me? It feels like when I did something really good when I was a kid and my dad patted me on the head and said, ‘good job.’”

At 57, Claudia Babral, the only woman at tonight’s jam, looks the picture of a rock-and-roll rebel: short-cropped white hair tucked beneath a black beret, a hot-rodded Ibanez Iceman slung over her shoulder with a chrome-studded strap. It’s a look she’s earned over decades, after forming her first rock band at “age 15 or 16,” she says.

Since then, Babral has performed mostly as a bass player. But a few years back, she decided she’d had enough.

“I got good at bass, so I couldn’t get to play guitar,” she says. “Then I had a midlife crisis and I decided I was done playing bass, because there were things I wanted to do on guitar.”

Lackard’s Wednesday jams offer Babral a chance to hone her six-string skills with a band — something that would otherwise be impossible.

“It’s very hard in this day and age to get a band together,” she says. “All of us are older. People have jobs and kids in college and stuff like that. But we just want to get out and play. Even if you are playing two or three songs, you’re getting out. And we all know each other. It’s one big family.”

For Babral, that family has played a critical role as she faces the biggest challenge of her life.

“I came down with small-cell lung cancer three years ago,” she says. “I almost died. At the time, I had been playing with a guy named Bob Skowronski, who I met at the blues jam. And after I got diagnosed, Bob thought we should do a recording of some of my music.”

Together with Lackard on bass and Paul Hislop on drums, Babral and Skowronski recorded five songs as Skidder Road.

“We thought that would be the end of it,” Babral says without irony. “Well, lo and behold, I recovered enough to play again. And I decided we needed to finish the album.” The result was I Don’t Want to Go to Heaven, released in 2012.

Lackard speaks respectfully of the role the jam nights have played in Babral’s cancer fight.

“Keeping the music going for her has made a big difference,” he says. “And that’s one of the things that has kept me going.”

In ways large and small, Lackard’s jams have made a difference in the lives of other musicians, too.

“Back in the ’90s, this tall, thin young fella came into Charlie-O’s, and he was talking about some cool blues stuff,” Lackard recalls. “He asked if he could sit in. And I said, let’s do it. Don’t be shy. So he did.”

That “kid,” who had just arrived in Vermont, was local bluesman Dave Keller, who, years later, still recalls that session as a warm welcome to his new home.

“John is a trailblazer for blues players in Vermont,” says Keller. “He created a door that I could walk through. Sitting in with him that day made me believe that playing my music in Vermont was possible.”

For John Lackard, it’s all about creating a setting in which musicians, from total neophytes to experienced pros, can shine. And he says it’s definitely worth it, even if “sometimes it gets tedious, with the late hours and trying to fit it into my schedule,” he says. “But I really enjoy helping people along musically. I’m just trying to make their night as good as possible. I guess that’s a curse that’s on me.”

The original print version of this article was headlined "Stormy Wednesday"