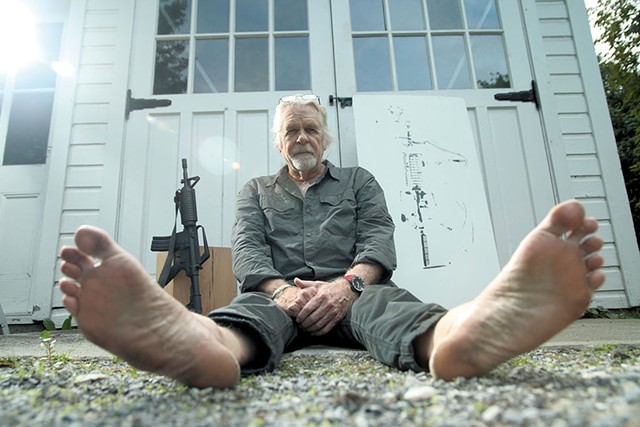 Burlington artist John Douglas has been making socially and politically conscious art in Vermont since the mid-'80s. Earlier this month, he exhibited a video work-in-progress titled "Auto Warming" in the South End Art Hop — and took first place in the juried show. The complex animation depicts a field of cars slowly being submerged under an ever-rising tide.

Some gallerygoers may remember Douglas' photographs from a 2013 show at the Furchgott Sourdiffe Gallery in Shelburne. Those depicted rocks floating mysteriously above placid waters. Earlier exhibits featured photographs from his "Homeland Security" series, in which Douglas appeared buck naked — save for an M16 slung over his shoulder and strategically covering certain body parts — in various postures and locations, including the Statehouse lawn. It's fair to say that his art has never been safe.

On September 10, Douglas crushed that M16 assault rifle during a steamroller-printing event at Helen Day Art Center in Stowe. Yes — he made a print of an assault rifle with an industrial steamroller, the kind used to smooth sidewalks after paving. It's not a new process, but it's an apt one when you're seeking to make fine-art prints and crush the image of a weaponized society.

Illinois-born Douglas attended several schools in the late 1950s, including Harvard University, the Tufts School of the Museum of Fine Arts and Boston University, then was drafted into the U.S. Army in 1961. After the service and before coming to Vermont — where he lives with longtime partner and fellow artist Eleanor Lanahan — Douglas was an activist and documentary filmmaker. On his own or with others, he made shorts and features on subjects such as Vietnam War draft resisters, Haitian refugees in New York and the U.S. invasion of Grenada.

Now 78, Douglas hasn't slowed down. He continues to work on "Auto Warming" and on a piece called "Ojihozo," which involves multiple photos and videos of a rock formation by that name on Lake Champlain. In an Abenaki origin story, Ojihozo is a legless mythical being who created the lake, then settled in it to witness its beauty.

Seven Days recently chatted with the artist about his work in his Burlington studio. What follows is excerpted from a much longer conversation.

SEVEN DAYS: How do you describe your profession?

JOHN DOUGLAS: At one point I said "artist," but you might put "filmmaker-slash-artist." When I came up [to Vermont] from filmmaking, I moved into computer-generated imagery. I had just finished a film in Grenada where half the people I had been working with had been killed. After a while I decided, having tried to change the world [with documentary film], I'd be an artist.

SD: How long have you been making socially conscious, political artwork?

JD: Mississippi really was the beginning. Coming back to the States [in the early '60s after the army], knowing what was going on down South, at that point I felt a clear commitment to do something, and so the possibility of making film down there was [snaps fingers] like that. So I bought a Bolex [camera] and two lenses for $600. It's a video camera that you wind up, a 16mm camera.

This was right on the heels of the march on Washington, the sit-ins, Freedom Summer, all of that. So this old friend of mine had been down there for Freedom Summer [in 1964] and had been in contact with people involved in Strike City — five families ... who were thrown off a plantation and put their tents on the White House lawn. The film [we made] is a whole documentation of that period.

A year later, I was part of the inception of a group called Newsreel, political filmmakers. [The People's War] was the first film the U.S. made in Vietnam [in 1969]. And it was shown and won prizes, not only in [the U.S.] but in Russia.

Strike City was turned down by [the Public Broadcasting Service] because "it needed subtitles," apparently. Milestones [about individuals who sought radical solutions to social problems] was three and a half hours long. PBS said, "It would be interesting if we just cut to the violence..." I said, "Fuck off, PBS." The last film, Grenada: [The] Future Coming Toward Us [1983], they didn't want that.

[Since then], I've been doing a bunch of computer animation.

SD: Did you have formal training in art and design?

JD: I started off in the fine arts department. I remember thinking, Man, there's more going on here than people are telling us. I remember sitting in the back of the room with this woman friend being like, "What the fuck are we doing here?"

I was artistic — at an early age, I guess. My grandmother was a serious painter in Chicago. I'm just saying — it wasn't an art school that sharpened my talents.

SD: What drew you to film as a medium?

JD: In the military, I was taking pictures and working in the darkroom on the side. My brother got an 8mm [movie camera] for his wedding and he didn't want it, so he gave it to me. The idea of filmmaking was just a logical extension of photography for me at that point. I was a pretty serious painter before I got drafted. So this was after a pretty serious period of painting, and also sculpture and welding.

SD: In "Homeland Security," you use an M16 and your naked body to contemplate ideas of violence and power. Why an M16? Why naked?

JD: It was, "I'm getting an M16 if Bush is elected." Because I wanted to understand that level of violence and people's attachment and relationship to it. And I tell you, you spend some time in some gun store, and — holy shit. I went to this one out in Williston, and there's this guy, [Drug Enforcement Administration] or whatever, talking to this other guy behind the counter about how he shot some guy right in the face — "blew him away, man." 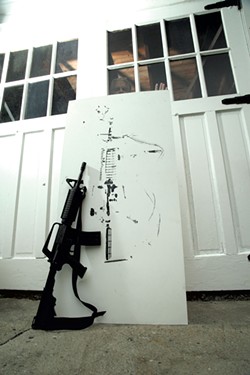 So I ordered a 9-millimeter AR [online], which is particularly designed for close-range killing. They can't send it to me from some gun store in Missouri, so they send it to the gun store [here,] and the guy says, "Oh, Douglas, yeah, we got something here for you" [pantomimes the clerk opening the box], and then, "Oh, shit, is this legal?"

And when I'm filling out the form, it says, "Race," and I write, "human race," and the guy says, "No, no, no, no. If you're going to play these games, you're not getting this weapon." So I write, "White." [Buying it] was an experience on its own, and that's not even firing the weapon.

[The project] was like, How the fuck to put this weapon into a context where you can see it for what it is? [In] the early shots, I was sitting around with Blackwater hats, parkas, just like [a military contractor.] But you couldn't make it horrifying if you were dressed up like them. I don't remember how I got to being naked. But it was like, OK, now you see the preposterousness of this relationship.

SD: Recently, you flattened an M16 with a steamroller. Can you talk me through that action/performance?

JD: It's funny, because [Burlington City Arts] had done some printing with a steamroller years ago, and I thought, That would be fantastic. So, when I saw it happening over at Helen Day, I prepared pieces of Masonite, painted them white and took them over there. And I brought over some spray-paint, and they said, "No, no, no. Use this ink!" Unbelievable, thick, globby ink. [That idea] was prompted by all the "No Killing" stuff [a manifesto against killing any living beings] and the idea of crushing [the rifle.]

There's a guy in Denmark who wants to buy the original [print] already. So I'll have to mount it and frame it and shit like that.

JD: I'm finishing editing "Ojihozo" and continuing to develop the "Auto Warming" piece [for the BCA Center exhibit "Of Land & Local"], and I just finished mounting and gold-leafing those prints in [my studio].

And after this, I will still keep taking pictures of Ojihozo, and I'm still working on "Auto Warming." That's what I'm working on.

The original print version of this article was headlined "Crushing Violence"