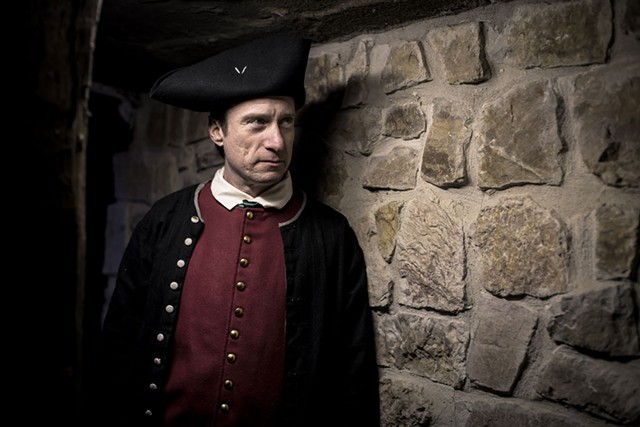 As the old chestnut goes, history repeats itself. Or, in the oft-misquoted words of Spanish American philosopher George Santayana: "Those who cannot remember the past are condemned to repeat it." But what about those who do remember? For one local songwriter, echoes of Vermont's political past are reverberating in the present.

It's almost unbelievable that such a history-minded, narrative-centered record could exist, even in a post-Hamilton world. But Daly and a small band of associates bring Lyon's tale vividly to life in painstaking detail, beginning with his origins in Ireland and continuing straight through his time as a Vermont congressman. Hardly a stuffy, Les Misérables-style demi-opera, Spit'n Lyon ingratiates itself with hook-focused, upbeat songwriting. Indeed, its intent is to tell Lyon's story, but it doesn't sacrifice listening pleasure for historical accuracy.

Lyon was a staunch opponent of the Alien and Sedition Acts of 1798. Those laws gave president John Adams the authority to detain and expel immigrants contributing to "the danger of the public peace or safety" and to "order such alien or aliens to be removed out of the territory of the United States." Daly sees striking parallels between that legislation and the present-day political climate — in particular, President Donald Trump's Muslim travel ban, as well as the separation of migrant families at the U.S.-Mexico border.

"Part of the imperative of sharing this project is that we have been here before," says Daly. "The president believes that he's the judge of who is worthy to be in America."

Lyon doesn't have the name recognition of other Vermont patriots such as Ethan Allen — though Lyon was a member of Allen's Green Mountain Boys militia. However, because of his contributions to American history, a portrait of the Irish immigrant does hang in the main hall of the Vermont Statehouse in Montpelier.

Lyon is most famous for being reelected to Congress while serving time for violating the Alien and Sedition Acts. Among other actions considered treasonous, he penned scathing indictments of Adams in his own newspaper, The Scourge of Aristocracy and Repository of Important Political Truth.

"Adams had a zeal for monarchy, at least from Lyon's perspective," says Daly. "[Adams] would have people kneel down before speaking, and he'd say, 'Rise and address his excellency.'"

Lyon also is noteworthy for casting the deciding vote in the election of 1800, which had fallen to the House of Representatives when the Electoral College resulted in a tie. His vote for Thomas Jefferson over Aaron Burr set in motion the decline of the Federalist Party.

Daly says he typically writes quickly, particularly for his own group, the John Daly Band.

"If it's a three-minute song, it took me three minutes and 20 seconds to write," he explains. "The 20 seconds was me trying to find the pen."

Spit'n Lyon, however, was a different beast.

"I was expecting [to write] one or two songs," says Daly. "Instead, it was five days of sleepless, manic composition. Most of the [album] came within a four- or five-day period. It was crazy."

The project was so consuming that Daly says he went as far as to dress in period clothing and work by candlelight with a homemade quill.

Though the bulk of his writing was a solo endeavor, Daly enlisted friends as major contributors: St. Louis-based producer Greg Goldman and Hinesburg-based teacher and musical theater expert Niel Maurer. On the project's website, which overflows with historical text, Daly, Goldman and Maurer are listed respectively as "legislative, executive and judicial" — a cheeky nod to the three branches of government.

"Typically, when you no longer have words to say in a musical, that's when you sing," says Maurer. Though Spit'n Lyon has no dialogue, Maurer says it was important for the project to "be mindful of where that threshold is."

The result is a cohesive and dynamic 30-track album, outfitted with guitar, bass, drums, and a heavy smattering of synth and other MIDI sounds. Stylistically, it touches on traditional Irish folk ("Ireland 1750"), progressive pop ("The King Owns This Tree"), smooth R&B ("Hold My Tea"), grunge-rock ("Marshall Fitch"), psych-pop ("Tree of Democracy") and straight-up musical theater territory ("Freedom Is the Child").

Most of the lyrics are from Daly's imagination, but some were lifted directly from history. For instance, the meter of "Porcupine Press / Rags" and certain lyrics came directly from language used in a newspaper ad Lyon placed during a colonial linen shortage.

Daly's ultimate vision for Spit'n Lyon is to turn it into a nonprofit traveling performance geared to Vermont schools. On February 27, a crowd of about 70 got a taste of what that might look like when Daly played selections of the album in the House chamber at the Vermont Statehouse.

Daly cites one particular modern politician who reminds him of Lyon, at least in terms of speaking truth to power: Sen. Bernie Sanders (I-Vt.). Sanders might well be flattered by the comparison — in 2006, he fought to have Lyon's name attached to the Fair Haven post office.

Ultimately, Daly sees Lyon's tale as inspiration for how to fight injustice in 2019 and a reminder that political crookedness is "something we have not outgrown as a species."

Says Daly: "This story is an example of the corruption of power and standing up to it."

The original print version of this article was headlined "Lyon's Roar"