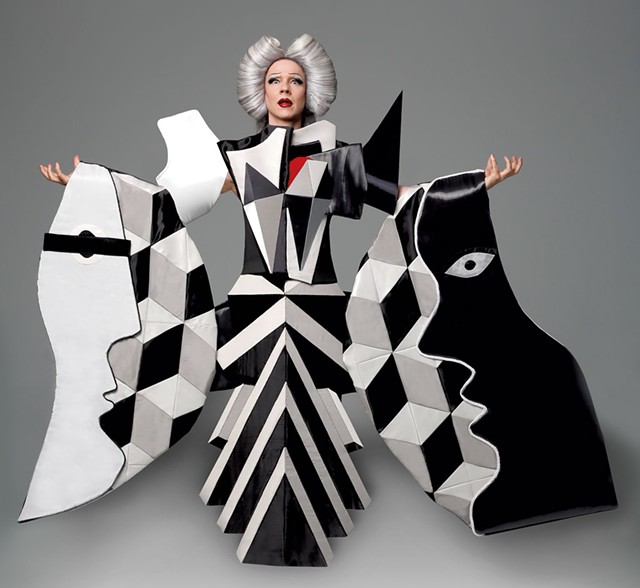 When John Cameron Mitchell and Stephen Trask brought Hedwig and the Angry Inch to the stage in 1998, they couldn't have anticipated the impact their rock musical would still have nearly a quarter-century later.

The story of a genderqueer East German rock singer who's touring while chasing down the ex-lover who stole her songs, Hedwig went on to enjoy massive success both on and off Broadway and on the silver screen. It also influenced a generation of people to be open about their sexuality.

Mitchell, who originated the role of Hedwig and played her in the film, returned recently to the iconic wigs for the first time since a limited run on Broadway in 2015. He and Trask bring The Origin of Love, a performance of songs from Hedwig, to Burlington's Flynn Main Stage on Saturday, March 19.

Seven Days rang up Mitchell to talk about the upcoming show, his portrayal of disgraced big cat breeder Joe Exotic in the new Peacock series "Joe vs Carole" and trying to stay punk in the era of cancel culture.

"Punk with love is where I come from, with a little Broadway thrown in." John Cameron Mitchell tweet this

SEVEN DAYS: How does it feel to return to the character of Hedwig?

JOHN CAMERON MITCHELL: It feels good! You know, I started this tour to help finance my mom's health care. She passed last year, very peacefully, but we wanted to finish the tour out. And it's been great. We have an amazing costume designed by Erik Bergrin. My co-singer, Amber Martin, is just incredible, too. She was joking that we might need to cover a Phish song. Which I have done, by the way! At my brother's wedding, which I believe was the last time I was up here.

SD: I imagine you're in a very different emotional place than you were when you first played Hedwig. Is it tough to get back in that mindset?

JCM: With Hedwig, I didn't live that story, but I lived those emotions. It completely changed me and cured me of a lot of the stuff that I had been taught growing up in Texas. Denigrating femininity and holding up masculinity — those things were taught to us, and they were completely wrong. Playing Hedwig cured me of some of that. So, no, it's not tough at all. I'm good with going back in time for this.

SD: I read that some people have criticized you for playing Hedwig because you are not trans. It must be odd to be told you're not qualified to play a role that you created.

JCM: It's a curious thing. For one, Hedwig isn't trans, she was forced into the surgery. So that's a little tricky right there. At the end of the day, Hedwig is drag, and drag is for everyone. We find a sense of wholeness in role-play. That's what acting and fiction is about: stepping into other people's shoes and other people's heels. You find out more about yourself and broaden your views, as opposed to sort of circling the wagons and slashing at allies for not being pure enough.

You end up doing the work of people like [Donald] Trump that way. When people start saying, "Hey, don't tell any stories but your own," I have to wonder, do they just want autobiographies? That's fine if it's what you like, but to me, that's just the Netflix of narcissism.

Our Hedwig aesthetic is completely open — anybody can play Hedwig. It comes from punk rock, [where] everything is up for discussion, but it has to be done with heart, with love. Punk with love is where I come from, with a little Broadway thrown in.

JCM: I'd say a little of both, really. I think young people, growing up in Gen Z and living through the Trump nightmare, they looked around and said, "OK, we just have to fix whatever we can." And they want to do it really fast, which I totally get.

But the enthusiasm for fixing things and doing good work can get a little police-y and shuts down free speech. Which is totally against what I do. I mean, even with my film Shortbus, which uses sex the way Hedwig used rock music, there was this outcry that it was exploitation. They tried to figure out how to cancel it, but they can't because they like the film. [Laughs.]

At the end of the day, I'm a Toni Morrison boy. She said you have to write what you don't know, because that is the beginning of empathy.

JCM: Joe is honestly as complex a role as playing Hedwig, with a lot of things in common between the two. They both were the king and queen of their world, had enemies they fixated on, as well as [hangers-on] that they ended up abusing. The difference is, Hedwig got out of the vicious cycle at the end. Joe did not.

You find out in our show that Joe's backstory is rather tragic. He lost two husbands. Having lost a boyfriend myself, those feelings definitely informed how I played him. The homophobia Joe experienced was worse than anything I faced growing up, but instead of running away to a big city or going in the closet, Joe went huge with the whole gun-toting, redneck, hypermasculine thing. There's narcissism in there, but it was defensive. He got tough, but toughness can curdle into imitating your oppressors.

SD: I was initially a little surprised at the way you and Kate McKinnon portrayed Joe and his nemesis, Carole Baskin — which is to say, it doesn't come across like actors doing impressions of famous people.

JCM: I didn't play Joe as a villain. I played him as a complex person who did terrible things, and he did good things. But what Kate and I are doing, yeah, it's not an impression. It's not karaoke. We interpret them: 50 percent is what we take from studying them; the rest is us bringing what we've got to the table, our own experiences.

SD: You are one busy dude. There's The Origin of Love tour and "Joe vs Carole," you've been cast in the upcoming "The Sandman" series on Netflix, and you're still making your "forever album," right?

JCM: Yes! The album is called New American Dream. It's an ongoing project where I write music with people I love, but also strangers. I have a song with Stephen called "Nation of One," which is the first song we've written since Hedwig. It's a benefit album, so everybody puts in their work for free, which is good because no one pays for music anymore. I love the idea of the album just racking up songs over the years, like a good memoir. I just moved to New Orleans and met Rickie Lee Jones, who lives close by. I think we're going to work on some songs, too.

I'm always thinking about what's next. What's going to be fun? The acting tends to finance all my projects, so I can do unusual stuff like my podcast, "Anthem: Homunculus." All of it is done with love, though. That's the gospel we're spreading with the Hedwig show, and with everything that I do.

The original print version of this article was headlined "Hair Apparent"