Senate Official John Bloomer Is Way More Than a 'Secretary' 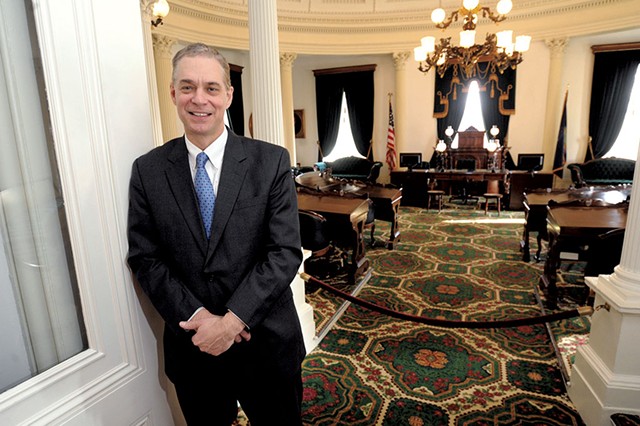 The Senate's first order of business when it reconvenes in January will be to decide whether to expel or suspend one of its own — a step never before taken in the chamber's 179-year history. Sen. Norm McAllister (R-Franklin) has been charged with forcing two women to have sex with him and trying to coerce a third. While he has been free on bail awaiting trial, several Senate colleagues have begged McAllister to resign. He has refused — prompting them to consider how they might force him from his seat.

As senators wrestled with this unprecedented question over the summer and fall, they turned for guidance to John Bloomer Jr., a former senator who has overseen operation of the 30-member Senate for the past five years. The 55-year-old lawyer dove into researching what was allowed under the Vermont Constitution, Vermont law and Senate rules. And when he found little direction there, he investigated what other states had done.

"My duty is to help them figure out where they want to go," said Bloomer. As secretary of the Senate, Bloomer is the parliamentarian, record keeper, traffic cop, and counselor to senators seeking advice on procedure and legislation.

Senators say it is Bloomer's record of providing evenhanded, nonpartisan advice that has cemented their trust in him as they prepare to plow new political ground. And with his ready smile, he is approachable.

"John lays out all the options," said Sen. Dick Mazza (D-Grand Isle), who serves on the Senate Rules Committee, which has weighed what to do. "He is very careful not to recommend one way or another. That is what is so comfortable. No matter what party you are in, he is giving you the facts."

McAllister has the right to take his seat in the Senate in January. If senators attempt to expel him, an idea that has fallen from favor, they would need to first undertake some kind of investigation, according to Bloomer. That would take time, and McAllister would have to be granted an opportunity to speak.

Bloomer wants senators to reach consensus about a process before they reconvene. "I just think that creates better order," he said. On Wednesday, Mazza's rules committee plans to discuss suspending McAllister while the charges are pending.

Bloomer is a Republican from a long line of powerful GOP politicians. He served four terms in the Senate and became Republican leader. Even in that partisan job, he had a reputation for fairness and collaboration that made it easy for the Democratic majority in the Senate to embrace his selection as secretary in 2010.

"I don't think anyone had any questions about it," said Senate President Pro Tempore John Campbell (D-Windsor). "The one word that best describes him is 'integrity.'"

"He is the epitome of a straight-shooter," Sen. David Zuckerman (P/D-Chittenden) said. "I have never seen him show his politics." Zuckerman recounted how he consulted Bloomer on the hotly contested end-of-life bill enacted in 2013. "We had a lot of discussion about procedures people could use to derail the bill," Zuckerman said. "I don't know where he stood on that topic. He was completely non-revealing."

Now, as Senate secretary, Bloomer makes $98,000 a year. He also practices law from a dark-paneled suite in a pillared Rutland mansion and teaches courses in finance at Castleton University. "By doing all three, I keep from getting bored at any one," he said.

Lt. Gov. Phil Scott served with Bloomer in the Senate and now works closely with him planning each day's session. Scott presides when the full Senate meets, with Bloomer and his staff seated in front of him. "He has the ability to see things coming," Scott said.

Scott said Bloomer is protective of the legislative process and Senate decorum. He is known for confiscating cellphones and water bottles, which are banned in the Senate chamber. He also monitors Twitter and scolds anyone caught using devices to go online in the Senate chamber because it interferes with the wireless audio system.

"He is like a hawk watching for prey, and it doesn't matter who you are," Scott said.

He and Bloomer told of how they conspired in 2013 to make an example of Sen. Bill Doyle (R-Washington), who kept forgetting to turn off his cellphone. Scott stashed an old phone at the podium. The next time Doyle's phone interrupted debate, the doorkeeper took it to Scott, who appeared to hammer it to pieces with his gavel.

"I think it got the message across we were serious," Bloomer said, recalling the shock in the room. "And it was also humorous."

Scott noted only one shortcoming — illegible handwriting. Scott said he strains to decipher notes that Bloomer passes him while presiding. Bloomer also lacks vehicular expertise, the race-car-driving lieutenant governor said: "He comes to me for car advice."

When Bloomer won election to the Vermont Senate in 1996, he came to Montpelier with a list of initiatives he hoped to accomplish for his dad. John Sr. had been a senator for a decade until he died in a head-on collision while commuting to the Statehouse on January 10, 1995.

One of the senior Bloomer's priorities had been flag-protection legislation — always controversial because it roused the passions of veterans who abhorred flag burning and opponents who saw burn bans as attacks on free speech.

On the seventh anniversary of his father's death, in 2002, with his mother seated behind him, then-Senate Republican leader Bloomer joined 21 other senators in voting to pass a resolution. It called on Congress to consider options from public education to a constitutional amendment to ensure that the flag is treated with respect. It was a compromise he had helped to craft with Democrats — not exactly what his Korean War veteran dad had wanted, but sufficient to end a decade of emotional debate.

The Bloomers of Rutland County have long been prominent players in Republican politics. Bloomer's grandfather, Asa, was speaker of the House and later president pro tem of the Senate. The state office building in Rutland bears his name. His uncle Robert rose to Senate pro tem, too, as did Bloomer's father. His mother, former representative Judy Crowley, and his stepfather, former senator John Crowley, were in the legislature with Bloomer in 2002 and voted on the flag resolution.

"We talked politics around the table," Judy Crowley said. When Bloomer's father died suddenly, governor Howard Dean appointed her to serve out the term. She decided not to run for reelection, because "it was just so natural" for John Jr. to seek his father's seat.

Bloomer commutes between his home in Wallingford and Montpelier — more than 150 round-trip miles along many of the same roads his father drove. "I hate that driving back and forth every day," said his mother. "He knows how we feel. I say my prayers."

Despite all the driving, Bloomer finds time for extensive preparation. As a senator, he would arrive for debates with the calendar and bills tabbed with Post-it notes. "Every legislator should do their homework," Bloomer said, acknowledging that he is a fast reader and accomplished multitasker. "There is a lot of time in between committees and during lunch."

Former Republican senator Vince Illuzzi said Bloomer's careful reading of bills when he was a senator was "one of his greatest contributions. He made sure the legislation that passed didn't create loopholes or unintended consequences."

Bloomer joined the Senate just as Democrats assumed a majority. But, Campbell said, Bloomer understood how to get the views of his caucus heard.

"John would go to [Peter] Shumlin," then Senate president pro tem and now governor, "and say, 'Here is what I can do if I'm put in a corner, and here is what I need,'" Campbell recounted. Often what Bloomer could do was delay a bill.

Bloomer recounted how he wielded his limited power once when the late Republican senator Barbara Snelling complained that her amendments had been passed over in committee. "I had the [matriarch] of my party being shafted by Liz Ready," Bloomer said, referring to former Democratic senator Elizabeth Ready of Lincoln. Bloomer blocked progress on the bill, forcing Democrats to huddle with him.

"How do we get out of this?" they asked.

"Take a break, and hear her amendments," Bloomer replied. "And that is pretty much what happened," he said, flashing one of his trademark grins.

Neither Ready nor Campbell remembered this incident, but both said Bloomer never held grudges after political sparring. "He is clever and shrewd as an opponent," Campbell said, "but you never see him in the conquering-hero mode."

On civil unions, however, he admitted, "I put myself in a box." He voted against giving same-sex couples access to the same rights and responsibilities as married men and women. Why? He explained that all the towns in his Senate district held "pseudo-referendums" on civil unions, and residents registered opposition by a 4-1 margin.

"We are usually elected to do what we think is best," he said, suggesting if he were acting on his conscience, he would have voted "yea." "The difference on this? They were engaged, and they had spoken."

With his son graduating from high school this year, Bloomer may be ready to consider other political options. He weighed a run for lieutenant governor in 2010.

"I thought he might run for statewide office," his mother said. Given the state's current political makeup, however, she added, "I don't know if that is in the cards."

"I hope he comes back to the Senate some day," Mazza said.

"There really isn't any place in state government where he wouldn't do well," Campbell offered, suggesting he would make a good judge. "I am on his cheerleading squad."

Asked directly about his political aspirations, Bloomer, ever the jokester, feigned a bad phone connection. Finally, he replied, "I don't know. I haven't said, 'Never.'"