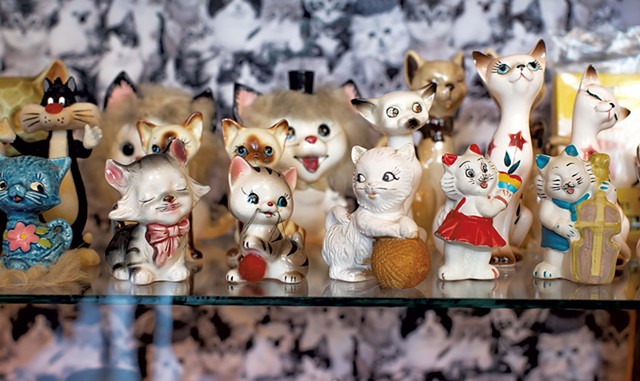 When Jaye and Joe MacAskill arrived in Vermont in the summer of 2020, the San Diego transplants had two goals: insinuate their musical comedy band, Pony Death Ride, into Vermont's music community and open a vintage boutique. On Friday, July 30, one year after the married couple touched down in the Champlain Valley, one of those goals will be realized with the grand opening of Catland Vintage in Winooski.

"I've known that I have a collecting problem for a long time," said Jaye of her lifelong affinity for bric-a-brac and esoterica. On a recent Monday, she and her husband stood proudly behind a glass case at their Onion City shop, excitedly describing and showing off their wares.

"[Before] I met Jaye, I didn't collect anything except unemployment," Joe quipped.

After years of amassing treasures, Jaye decided to collect only cat stuff as a way to corral her insatiable appetite for fine vintage goods. That strategy worked for a little while, until friends started pawning off all of their cat-related objets d'art on her. And once she and Joe became regular pickers on the Southern California estate-sale circuit — sometimes hitting four or five in a weekend — they packed their previous home to the gills with oddities of all kinds to sell on eBay.

"We just had so much stuff at our old house, it was overwhelming," Joe said.

Jaye has wanted to open a vintage shop since she was a teenager. Before moving to Vermont, the MacAskills worked as real estate agents, which they conceded they were "not cut out for." As their hoard grew and the pandemic raged, they decided to set off on an adventure, find a new place to live and finally curate a largely cat-themed shop. They'd heard good things about Burlington and liked that it was close to Canada, Jaye's homeland.

"You need a good gimmick." Jaye MacAskill tweet this

The MacAskills documented their renovation in a video set to "Kitties Are So Nice," a track from their 2016 album Cat Sounds. The four-minute clip compresses months of work, showing the transformation from a dingy, brown space to a busy, colorful treasure trove with freshly painted aqua walls and a glitter-splattered floor. Their final touch: painting the façade a bright canary yellow.

"It's a real estate trick," Jaye said. "If you want to sell your property faster, paint the door yellow."

So, why such a focus on felines? Why not just run a vintage store that happens to sell a lot of cat items?

"You need a good gimmick," Jaye explained. While the shop offers a plethora of items, including clothing, housewares and music gear, kitties can be found in practically every category.

A bin of vinyl records includes the soundtrack to Disney's The Aristocats. A velvet painting of a prowling tiger hangs behind the sales counter. And several large, wearable cat heads line the upper shelves of a wall display. (The MacAskills acquired them a few years ago for a music video shoot for their song "Furries!" It's about people who dress up in fuzzy animal costumes to, well, you know.)

The most purrfect collection, though, is arguably the MacAskills' cat figurines. They come in all shapes and sizes, from realistic and minuscule to highly anthropomorphized and more than a foot tall. These tabbies perch, preen, prowl and pose in every nook and cranny. Some cast their steely stares through slits while others gaze up with wide blue eyes.

All these pussycats are borderline unnerving, but in a whimsical way.

Since the shop isn't open yet, the MacAskills don't know who their clientele will be.

"We haven't met any truly crazy cat people [yet], but I'm looking forward to it," Jaye said.

Since the pandemic shuttered music venues during the bulk of their first year in Vermont, the MacAskills haven't been able to make many creative connections. One local musician they did meet early on was Vermont bassist Tyler Bolles, known particularly for playing in Swale. The art-rock group and Pony Death Ride are both given to mounting quirky Christmas musical extravaganzas.

"They're the best kind of weirdos," Bolles said by phone, suggesting that the MacAskills are the type of newcomers "the Vermont music scene needs."

"Part of [opening Catland Vintage] is a way to sell off a lot of the stuff we have and make a little money," Joe said. "But another part is, not being from Vermont, it's a great way to meet people."

To that end, the couple plans to host small events once the store is up and running. One item not for sale is a small console piano, visible from the street, which they hope will attract neighbors and other passersby to sit for a spell and plunk out a tune or two.

Bolles noted that, pre-pandemic, new Vermonters who wanted to see — or play — music would "naturally wind up at a place like Radio Bean." But setting up shop in downtown Winooski will help the MacAskills meet their social goals.

"Being in this circle ... what a sense of community with the businesses," Joe remarked. "We're going to go to every single one of them."