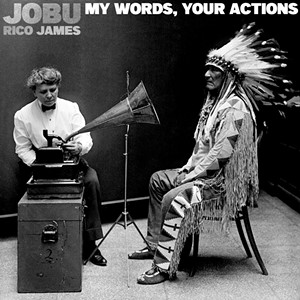 Burlington producer Rico James had a busy 2020. During the lockdown, he dropped three volumes of his Solitary Consignment instrumental series. He capped that off with Bring a Friend, a Soundbombing-style mixtape packed with talent from Vermont and beyond. It was a joyful noise and a celebration of his burgeoning career. As James' catalog and his reach have grown, so has his cast of collaborators.

Yet for his latest LP, released on January 20, things couldn't be more different. James linked up with Jobu, a Bronx-born MC with an acid pen and a laid-back flow. My Words, Your Actions is an urgent and deeply personal album, devoid of any guest features. Jobu is rhetorically merciless, aiming his polemics at both his oppressors and his own community with equal ferocity.

While the project is saturated in current events, it would be a mistake to call this a product of the Black Lives Matter era. Indeed, what's most remarkable about the album is its timelessness, rooted in injustices and atrocities that have defined American history. Jobu's style also draws on a deeper vein of bluntly political hip-hop, particularly the style of Poor Righteous Teachers, and the raw fire of Paris.

Fittingly, James' production throughout is dark, almost mournful, a perfect backdrop for Jobu's cutting cadences. The beats are a world apart from contemporary radio rap, instead built around sparse, driving drums and minor-key samples. The album opens with Malcolm X talking about police brutality in 1962. Like so much of his oration, those words could have been written yesterday, and his presence is interspersed throughout these tracks.

Jobu balances his anger with cautious hope. The middle of the album is shaped by the back-to-back impact of "Up Next," a terse memorial to victims of police killings, and "Now We Fight," which outlines his vision for a self-actualized Black community. It's one of his strongest moments, but Jobu takes his commentary much further.

Closing track "Montana" is a storytelling piece about the 1870 Marias Massacre, in which the U.S. Army slaughtered more than 200 Piegan Blackfeet Indians — mostly women, children and the elderly. With sharp bars over a stark beat, Jobu demonstrates how such cruelties have shaped modern America. He doesn't care whether modern citizens are willing to see it: He's here to force the issue.

Packed into about half an hour, My Words, Your Actions is a relentlessly bleak experience. It's also compelling and often powerful. There's no way to soften the edges of what Jobu takes on here.

Of course, exactly none of that should discourage rap fans from checking it out. And how could it? This is an MC with a distinctive style and huge ambitions, speaking his truth in close collaboration with the perfect producer. That should be enough to sell anyone who loves the genre on giving this a spin.

My Words, Your Actions by Jobu & Rico James is available at soundsofrico.bandcamp.com.