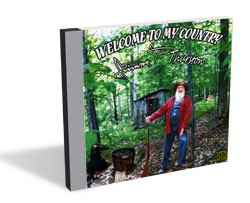 It’s almost hard to believe that men like Jimmy “T” Thurston still exist. On the cover of his latest album — which album number is hard to discern — Welcome to My Country, the grinning Vermont native is seen standing in front of a run-down, backwoods shack clad in denim overalls, his long beard falling over a red flannel shirt, scraggly white wisps stopping just above the slight bulge of a well-earned beer belly. In the foreground sits what looks like a moonshine still, just to the left of the rifle Thurston holds in his right hand. Were it anyone else, Thurston’s hillbilly/1850s gold prospector getup might seem comically contrived — and the image did initially elicit a chuckle from this scribe. But Jimmy T has been tearing up Vermont hillsides since the 1960s. This outlaw rocker is the genuine article, for better or worse.

Backed by a consortium of musical pals, including his son, country singer Jamie Lee Thurston, and members of his longtime backing band, the Sleepy Hollow Boys, Jimmy T brawls and bawls his way through 13 original tracks of barroom rock and roadhouse country. From the raucous opener, “Who Put the Mojo in the Hoodew Stew,” to quieter, mostly acoustic numbers such as the title track, and straight-up country as on “I’m Gonna Cry Me a Heartache Tonite,” Thurston’s haggard croon suggests a life spent — or misspent — rambling.

As a lyricist, Thurston is usually straightforward, occasionally sly and always entertaining. There’s a wildness about him that is undeniably compelling. And maybe a bit heartbreaking.

It’s easy to romanticize the hell this man has raised over the years. We do it with the legends of outlaw country all the time. But as badass as Messrs. Haggard, Jennings and Cash undoubtedly were in their day, these were deeply flawed men. And while we celebrate and mythologize their hardness, what humanizes them is the regret for misdeeds implicit in their music. Simmering beneath Thurston’s gravelly snarl and entertaining bluster, there’s no shortage of contrition, as if an older, wiser Thurston has come to question the folly of his youth. It all makes for a fascinating, and surprisingly potent, listen from a truly singular Vermont songwriter.

Welcome to My Country by Jimmy “T” Thurston is available at jimmytmusic.com.