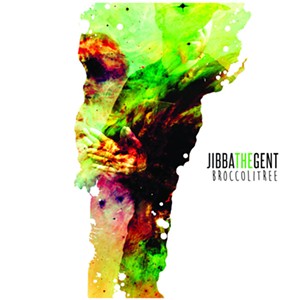 Springfield, Vt., rapper Jibba the Gent has been quietly paying dues for more than a decade. He's worked with a lot of crews and groups — most notably Cause and Effect, his collaboration with MC/producer Vazy. He's been a show promoter, a studio co-owner and a tireless champion for the Vermont scene. The Broccoli Tree is his debut album as a solo artist, and it's a serious accomplishment.

The Broccoli Tree bears the mark of someone who grew up listening to hip-hop — like, all of it. Every subgenre you can think of is represented in these 15 tracks. More impressive still: The sound is consistent throughout, and Jibba never once sounds uncomfortable or out of his depth.

That's probably because this album represents years of work and experience in the studio. Another major factor is Zach Crawford, better known as Sky Splitter Ink, who helped assemble the final product, then mixed and mastered the whole album. Jibba's debut sounds professional, bright and just plain huge.

The rapper makes the most of that canvas, too. Jibba is a remarkably flexible writer and performer. He can change his flow and cadence to dramatic effect, but he never does so for the sake of showing off — it's all about the song. His verses and hooks are always attuned to the beat, and his ear for rhythm and pitch is rock solid.

This organic approach extends to his collaborations, too, and there are quite a few guest artists on The Broccoli Tree. Perhaps the most notable is Noah Jones, a rapper from California who delivers two standout performances on "2 the World" and "Fantasy." Then there's "Air Raid," a bombastic show-off number with some amazing verses courtesy of Fury and Vazy.

Friendly competition seems to bring out the best in Jibba. "Do It for My City," an upbeat, soulful anthem with Yung Breeze, features some of his most confidently melodic work on the mic. Another major highlight is "Buy It," on which he partners with unsung Vermont rap maniac Madscatta. Jibba delivers such a high-energy tongue twister that I can only assume he was levitating in the booth.

What really fleshes out this album, however, are the bluntly personal tracks, such as "Charlee's Song," an ode to the awe and doubt of being a new parent. Even when Jibba does inspirational tunes — the opener "Chosen," for example — he's always grounding his life advice in his own personal pain. His talent is a force to be reckoned with, but the man's honesty is what sets Jibba apart.

The Broccoli Tree is an imposing debut, both joyful and world-weary. All of the songs work independently. But just as as impressively, they also work with each other. Jibba the Gent is a ferociously competitive rapper but still offers an intimate look at his real, grown-up life. This is an artist with the range to do damn near anything he wants. No matter where he takes it from here, it will be 100 percent from the heart.

The Broccoli Tree by Jibba the Gent is available at jibbathegent.bandcamp.com.