Thirty minutes before the July 24 lunch in honor of celebrated Jewish food expert Joan Nathan, more than a dozen dishes from her latest cookbook were on display in the Ohavi Zedek Synagogue kitchen in Burlington.

There was a Persian version of the ceremonial Passover haroset made with dates and pistachios, an elegantly molded salmon gefilte fish, Venetian-style sweet-and-sour sardines, and an Eastern European flatbread called pletzel topped with caramelized onions.

For many years, Jewish American cooking leaned heavily toward Eastern European and German recipes, reflecting the ethnic roots of many Jews who moved to the U.S. The spread at Ohavi Zedek represented a much broader cuisine spectrum — as does Nathan's work.

Nathan, 75, who splits her time between Washington, D.C., and Martha's Vineyard, has 11 books to her credit, as well as regular New York Times bylines and a lauded PBS series on Jewish cooking in America. Her many honors include induction into the James Beard Foundation's Who's Who of Food & Beverage in America.

In town last week for a cookbook dinner at Church Street restaurant Honey Road, Nathan added the synagogue event to connect with the local Jewish community. When traveling, she's constantly seeking the personal stories behind recipes. 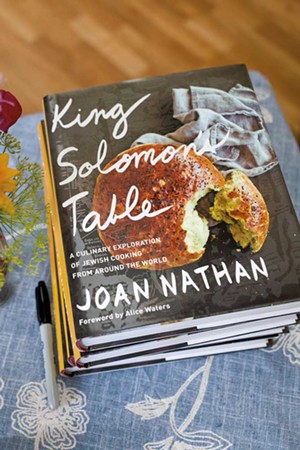 Her latest book, King Solomon's Table: A Culinary Exploration of Jewish Cooking From Around the World, showcases the connections Nathan has made with Jewish cooks of incredibly diverse cultural backgrounds. Those range from her unexpected discovery of a tiny Jewish community while on vacation in southern India to a chance meeting with a Jamaican Jew in a New York City train station. Through anecdotes and recipes, Nathan brings to life the kaleidoscopic global Jewish experience and the common threads that tie it together.

Ohavi Zedek's chef, Richard Witting, coordinated a team of more than 10 volunteers to prepare the meal for about 60 guests. Witting, who studied anthropology with an emphasis on history and food, said Nathan's cookbook was right up his alley. "Recipes are history that goes back and also goes forward," he said.

Like many professional chefs, Witting does not usually follow recipes closely, but in this case, he said, "I wanted to stay true to them and honor her."

Among the volunteers was synagogue member Barbara Silver, 81, who had brought two Nathan cookbooks from her own collection. Leafing through Jewish Cooking in America, Silver paused at a recipe for tschav (sorrel soup) that she'd made recently, prompting many memories.

"That's what I mostly use her books for: to remind me," Silver reflected. "Her cookbooks have a lot of stories in them. They tweak my memory of the stories my mother told me."

When Nathan arrived, she was clearly impressed by the culinary effort. "You did a beautiful, beautiful job," she said to Witting. "I don't think anyone else has ever made this many of the recipes."

In a brief interview before lunch, Nathan shared that she's had a soft spot for Vermont since the 1950s, when she went to summer camp in Colchester and skied in Stowe. Her book editor at Alfred A. Knopf, the late Judith Jones, had a home in the Northeast Kingdom, where Nathan visited her often.

Nathan's career as a cookbook author started quite by accident when she worked for Jerusalem mayor Teddy Kollek as a press officer in the early 1970s. "It really started as a lark," she admitted. "I was supposed to steer people away from the political story, so I started going into kitchens to see what people were cooking. Everyone likes to eat."

Connecting people over food, she observed, can serve a purpose. "I first learned that in Jerusalem when I went to an Arab home with the mayor, and we all sat down together for a delicious Palestinian chicken dish called mousakhan."

That work led to her first, cowritten cookbook, The Flavor of Jerusalem, which was turned down by 16 publishers before its release in 1975. "And then a career happened," Nathan said with a bemused smile.

Over the years, Nathan said, home cooks have become more adventurous, health conscious and ingredient driven. "They want to do what chefs are doing. They're not afraid of the new or the unfamiliar," she said, noting that our palates are now global.

"And you can't say this to the grandmothers, but we're better cooks now," she added. "We have access to better ingredients, better equipment."

That doesn't mean people should not treasure the recipes of their grandparents, Nathan qualified: "My one wish is that, at least for the holidays, we should all hold on to old family recipes."

After being briefly introduced by Rabbi Amy Small, Nathan spoke to the crowd about her journey researching King Solomon's Table. The dishes they were about to eat, she said, reflected the globalism of the Jewish people. "Jews were always being kicked out of countries," she said. "There was constantly this roaming, roaming, roaming, and they had to adapt their recipes to new ingredients."

In her travels, Nathan said, "I would always look for the familiar in the unfamiliar." She cited a recipe from an El Salvadoran Jewish community for root vegetable pancakes similar to European potato latkes but made with shredded yuca and topped with cilantro cream.

The centerpiece of the event's dessert platter was an orange-scented, spiced, date-filled cake popular in Libya and named after King Solomon.

The cookbook's title character, Nathan explained, is believed to have ruled ancient Israel for 40 years. Solomon's appetites of all kinds were legendary. He supposedly had 700 wives and more than 300 mistresses from all over the region now called the Middle East.

These women, Nathan said, would have brought treasured ingredients and dishes with them. Tradition of the times also held that the 12 tribes of Israel had to tithe offerings to the king, including foods and spices. All of those ingredients would have added up to a richly diverse royal menu, a historical parallel to the variety represented in the book.

Vivien Brown, Ohavi Zedek's board president, considered the global flavors on her plate. "It's all so delicious and different," she said. "You think you know Jewish food, but you don't."

After everyone had eaten, Rabbi Small opened up the floor to memories of food and recipes. Attendees shared stories of Lithuanian honey cakes, Polish onion cookies, Romanian pastries filled with farmer's cheese, and potato dumplings called shlishki in Hungary and vareniki in a family with Galician roots. They recalled a grandfather who rolled out nut candy and a grandmother who could use minor tweaks to turn one basic dough into everything from challah to piecrust.

Years ago, as a student in France living with a Jewish family originally from Algeria, Barrie Silver experienced a new type of Jewish food, she said. The grandmother rolled couscous by hand. Tagines and savory filled pastries called bureka were served for Shabbat dinner. 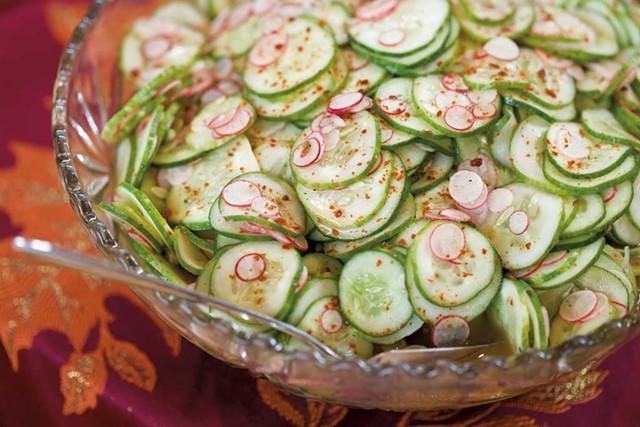 Gabrielle Shirazipour spoke about the culinary traditions of her husband's family, who were from Syria and Iran. She was making a bean, onion and lamb stew when she received news that her mother-in-law had passed away, which prompted her to tell her grandchildren that this dish they loved was their great-grandmother's recipe. "Now they ask for her food," Shirazipour said. "She lives on in her food."

Barbara Silver echoed that sentiment: "When I'm in the kitchen cooking, if I'm doing something traditional, my head swims with memories. You get this warm feeling: who did it, where they came from and the love they put into it."

Nathan concluded the event by thanking everyone for sharing their stories and encouraging them to keep the traditions alive. "You transmit these recipes, these thoughts and these feelings on to the next generation," she said. "This is what makes your family special at a time when too much is the same."

Slightly adapted from King Solomon's Table: A Culinary Exploration of Jewish Cooking From Around the World by Joan Nathan (Knopf, 2017).

In her introduction to this recipe, Joan Nathan writes that bazargan is reminiscent of tabbouleh and uses the same type of parboiled bulgur wheat. At the Ohavi Zedek lunch, the dish proved a big hit and was served more as a grain salad than as a dip. Chef Richard Witting substituted a little apple cider vinegar and sugar for the tamarind concentrate. A summertime bonus: It requires no cooking.

Chef Richard Witting is working on a series of pop-up dinners inspired by the Jewish diaspora that he hopes to launch at Ohavi Zedek in the fall. Contact isoledinnerclub@gmail.com to be added to Witting's event email list.