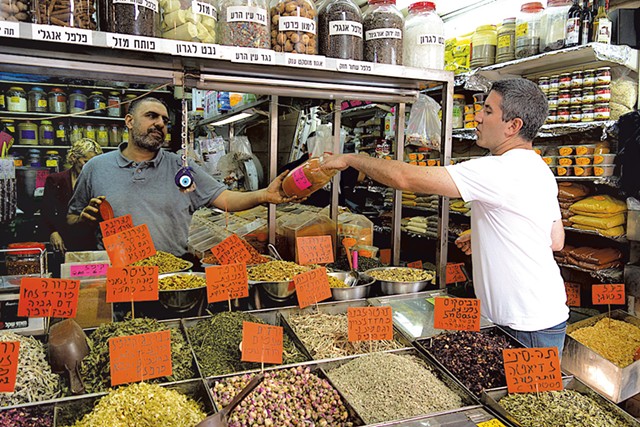 Jewish film festivals are a staple in major American cities — from New York, Los Angeles and Chicago to Boston, Miami and Washington, D.C. The oldest, the San Francisco Jewish Film Festival, was founded in 1980. The largest, the Atlanta Jewish Film Festival, sold more than 36,000 tickets in 2016.

Starting in July, you can add the town of Stowe to that list.

The inspiration for the inaugural Stowe Jewish Film Festival, presented by the Jewish Community of Greater Stowe (JCOGS), began with one woman's love of food and her desire to see the documentary In Search of Israeli Cuisine.

"I really wanted to see that film, so it was somewhat selfish in a way," JCOGS member Edee Simon-Israel admits with a laugh. "I'm a foodie, and I love Israeli and Middle Eastern food, and I had a strong personal interest in seeing that film."

Simon-Israel contacted the film's director and distributor about the logistics of obtaining screening rights. After she consulted with the JCOGS board of trustees and Rabbi David Fainsilber, the idea of a Jewish film fest was born.

The three-film SJFF kicks off on July 13 with a screening of the Israeli food documentary. That will be followed on August 10 by Nobody was Interested. Nobody Asked: The Holocaust, the Survivors and the Montreal Jewish Community. The festival concludes on August 24 with Raise the Roof, a documentary about the reconstruction of the Gwodziec Synagogue, which was destroyed during the Nazi occupation of Poland. The makers of each film will be present at the screening for a Q&A session.

The inclusive spirit of JCOGS — unlike many similar organizations, it's not affiliated with a specific denomination of Judaism — helped shape the varied festival program. Simon-Israel is quick to point out that the festival's purpose isn't to focus strictly on Jewish filmmaking. Rather, the common denominator of the films is some kind of Jewish theme or content.

In Search of Israeli Cuisine, for example, is as much a food film as it is an examination of the diverse cultures of Israel. A pair of non-Jewish artists spearheaded the synagogue reconstruction project documented in Raise the Roof. Nobody was Interested deals most directly with the postwar Jewish experience, but Simon-Israel thinks the movie has relevance to the diaspora of refugees from various countries who have immigrated across the globe in recent years.

"It's an example of what any immigrant or refugee population might go through if they have to leave the world and the community they know and are resettled in a strange place," Simon-Israel says. "I know that there are lessons in that film for us in 2016. So, while the film is about Holocaust survivors resettled in Montréal after World War II, and the liberation of the concentration camps and what they went through, I think that a broader non-Jewish population that looks at this film and looks at the lessons in it will learn how we treat refugees today."

The selection of Nobody was Interested also underscores the strong connections JCOGS has to the Jewish community in Montréal. Fainsilber, who is originally from that city, is friends with the filmmakers and recommended that the movie be added to the program. According to Simon-Israel, Montréalers who own second homes or vacation in Stowe were instrumental in establishing JCOGS through their financial support.

Should the festival prove successful, any profits will be earmarked for a second annual event. Rather than try to expand SJFF into a monthly film series, Simon-Israel says, the organizers would again schedule it during the summer months to capitalize on the influx of seasonal Stowe residents.

But for now, the SJFF organizers' focus is to attract a broad audience base outside of the local Jewish community and the greater Stowe area. They hope that having guest speakers at each screening will widen the appeal of the overall festival experience.

"We don't expect to appeal solely to a Jewish audience," Simon-Israel says. "We think that every one of these films might be of interest in some respect to the rest of the Vermont population."

The original print version of this article was headlined "From Cuisine to Immigration, New Jewish Film Festival Offers Food for Thought"