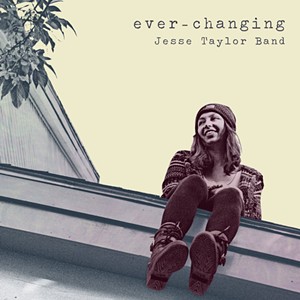 A cardboard cutout of Gwen Stefani looks over my shoulder while I work in my home office. I frequently wear a No Doubt shirt to bed and sip coffee from a cup plastered with Gwen's red-lipped mug. I'd love to know whether Burlington singer-songwriter Jesse Taylor stans Stefani and her band as hard as I do, because listening to her January 1 EP, Ever-Changing, I can't stop hearing similarities to the Anaheim foursome.

It's not that Taylor's band has a glam aesthetic or reggae-infused style. Rather, the connection to No Doubt and Stefani is drawn in Taylor's voice — as a singer with her phrase-ending warble, and as a writer reflecting on life transitions through a lens of relationships, mental health and traditional milestones.

Ever-Changing's title track and first single came out December 25 with a video directed by Christian James. The mid-tempo alt-rock tune telegraphs No Doubt's 2000 quarter-life-crisis ballad "Simple Kind of Life" as Taylor's straightforward rhythm guitar underpins lyrics examining her own identity and needs — and their implications for her future.

Taylor seems in limbo when she sings, "You ask me if I never want to see you again / Oh baby, I don't have the answers / I'm ever-changing, rearranging trying to / Figure out what works for me."

She has some fun with "Blue," a high-energy pop-punk number that plays with the pitfalls of intercontinental dating: "It just doesn't seem realistic for one of us to have to emigrate." Fair point.

Predictably, the pandemic played a role in the production of this five-song EP. After starting work at Plaid Dog Recording in Allston, Mass., in February of last year, the band was forced to finish remotely with producer Mike Davidson. If the process was challenging, I'd never know it as a listener. The production sounds smooth and professional but still vital.

Gone is the country tinge that flavored Taylor's previous release, the 2018 EP 80° in October. Here, the Jesse Taylor Band is all alt-rock. That is, except for lead guitar player Nick Treis, whose jam-band noodling is overpowering and out of place.

Taylor could easily perform these songs with just her voice and acoustic guitar, but, as a fan of rock and roll and electric guitars, I'm glad she's got a band. The performance works best when the players augment Taylor's already strong and thoughtful rock songs. No shark-jumping guitar solos needed.

Ever-Changing is available at jessetaylor.bandcamp.com. The Jesse Taylor Band livestream a concert on Thursday, February 4, as part of the Live From the Underground series. Find the event on Facebook for details.