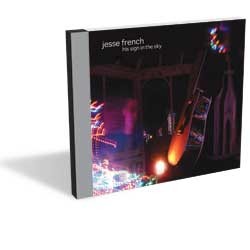 Vermont, meet Jesse French. Yes, some may recognize him from his days behind the microphone as guitarist/lead singer in the Burlington-based Neil Young tribute band Ragged Glory. Others may know him from his nascent music-playing days in the Charlotte-born outfit Metameric. But on his first full-length album, Jesse French steps out on his own, showcasing not only his growth as a musician but also his talent for songwriting.

The 10-track His Sign in the Sky was entirely — and impressively — written, performed and recorded by French alone (with the exception of some guitar contributions by father Ken French and Metameric bandmate John Mills). Bass, drums, guitar — it’s all Jesse. That alone would be an accomplishment. But the parts are played well and the songs themselves, in terms of arrangements and lyrics, are quite good. And that underscores what his followers have probably been preaching for years: Jesse French is a musician to watch.

With his experience in Ragged Glory, one might expect a bigger Neil Young influence on His Sign. But, really, the only echo of grunge’s godfather on the album are the ways French mines each song for emotional truth. “On the day that I turn 20, I will be swept away from this Earth / To be replaced by someone who’s been following me around since birth,” French sings on the album opener “Dead Languages.” The tune defies a one-word — or, hell, even one-sentence — thematic description. Is it a love song? A coming-of-age number? A prophecy?

Like much of the songcraft here, it’s probably a little bit of everything. But it’s pretty damn deep for someone who’s still a college student, even if he is a music major. French writes, sings and performs with a maturity that belies his “young man” status. The banjo-driven “Standing True” has a weepy, slow groove that could easily be the backdrop for an Ani DiFranco song, while the simple acoustic guitar on “Conservation of Matter” leaves space enough for French to apply fundamental principles of physics to matters of the heart. He plaintively croons, “If conservation of matter is true / Then I’ve got all I want, I can stay here with you.”

“I used to listen to him when…” is a phrase reserved for musicians such as French, who are only beginning to discover the depth of their songwriting well. There is a talent at work on His Sign in the Sky that warrants close listening, and close following. This is surely just a taste of what’s to come from Jesse French.

French performs a CD release party show at the Skinny Pancake in Burlington on Friday, December 23.