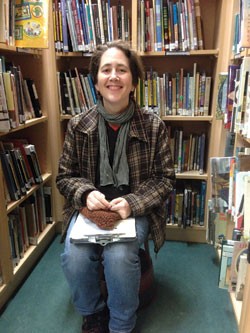 “I love love love the Roxbury Library!” declares Jessamyn West, who might be the librarian laureate of Vermont, if there were such a thing. The one-story building housing the Roxbury Free Library is indeed charming. It’s tiny and staffed by a welcoming librarian, and its bathroom (built only a few years ago, when indoor plumbing was finally installed) features a gorgeous marble floor hand-cut by a local craftsman.

But West’s enthusiastic love for this library — and all libraries, really — runs deeper than mere appreciation of their quaintness or beauty.

West is visiting Roxbury (pop. 691), the geographic center of the state, for the latest of her many projects highlighting issues of community information access. She’s visiting and photographing every single one of Vermont’s 183 public libraries. So far, she’s hit about a sixth of the total.

West is already a member of the 251 Club — an unofficial group of people who’ve visited each of Vermont’s 251 towns or are working on it. But she set out on her library project as a way not only to revisit favorite locales (“I love them all. I love every town,” she says), but to call attention to the importance of libraries in Vermont communities.

West, 45, has many titles. She’s the community technology librarian at the Randolph Technical Career Center (RTCC); director of operations for the community weblog MetaFilter (disclosure: this author is also a MetaFilter member); the founder of Librarian.net, one of the first and most comprehensive library-related blogs; a popular speaker, teacher and anticensorship warrior; and a justice of the peace. Inasmuch as librarians may be described as “famous,” West has earned that descriptor.

At the moment, she’s informally tracking her progress through Vermont’s libraries, using both online and paper-and-highlighter technologies. But someday she’d like to see her project take the form of a passport-and-stamp tour book, she says, or “a little self-serve website” for literarily inclined road-trippers.

Each of Vermont’s libraries, no matter how small, West says, is a source of “unbiased advice about the things that are interesting in their areas … and a way to get to know a community [better] than going to see a tourist attraction.”

And let’s not forget, she adds, “The restrooms are clean!”

While visiting four public libraries on a recent foggy afternoon, West checks out books and videos, buys holiday raffle tickets, admires a kids-only computer, chats with staffers about patron bases, and, in Roxbury, peruses unique historical town documents. That’s exactly the kind of important information, she points out, that has not yet been digitized.

At the Kimball Public Library in West’s hometown of Randolph, a brief chat with a librarian leads her to a book she hadn’t known about: Patricia W. Belding’s Where the Books Are: the History and Architecture of Vermont’s Public Libraries With Photos and Anecdotes. Delighted, West checks the book out and reads from it on the way to her next stop, the Brookfield Free Public Library.

Above all, West values libraries because they are committed to providing access to information and knowledge. And access is a topic about which she is well informed and passionate. She’s written a book, Without a Net: Librarians Bridging the Digital Divide, that addresses the challenges of delivering widespread access to information technology. That problem can be especially acute in Vermont, where many rural areas have very slow internet access or none at all.

West comes armed with statistics from the Vermont Department of Libraries — for example, that 19 of the state’s 183 public libraries lack internet access. Though she says she doesn’t believe that web access is the ultimate goal of a library, West would certainly like to enhance all Vermonters’ access to information.

That’s a task she sees as a primary concern of the modern librarian. “We’re not going to solve the digital divide just by making another website to help people navigate the digital divide,” West says. If a person with zero computer experience is simply plunked down in front of a terminal and told, “‘Sign up for health care,’” she adds, “well, that doesn’t actually solve a problem.”

Libraries stand quietly at the forefront of the response to a number of other challenging issues, not the least of which is privacy. West refers to a recent incident in Randolph in which local police, investigating a crime, requested access to library computers. Insisting that their first responsibility was to the privacy of their patrons, librarians insisted the cops get a warrant. The authorities did so, but a minor controversy arose about the relative values of safety and privacy.

Issues of copyright and digital rights management technologies (designed to limit post-sale access to digital content) get West particularly fired up, especially when, for instance, media companies harass a library for arranging a public showing of a DVD that it legally owns. This is a legal gray area, and West says it frustrates her immensely, but she understands why some libraries don’t try to push the envelope. “For a public servant, breaking the law — even a stupid law — is a path that’s fraught with peril,” says West, who favors what she calls “reasonable copyright.”

For these and other opinions, West is regarded within the library world as a bit of a rabble-rouser. She’s no great fan of the American Library Association, an organization she’s taken to task for what she sees as its inadequate grasp of digital technology. West has also attracted attention for her efforts to fight the USA PATRIOT Act.

Giant library organizations may not be West’s biggest fans, but local librarians adore her almost as much as she adores them. At RTCC, West leads a variety of computer classes for students of all experience levels. Ruth Durkee, West’s supervisor and the assistant director of adult education at RTCC, describes her classes as “hugely popular.” Durkee says of West, “She will not be quiet if she sees something that she thinks libraries should be doing that they aren’t doing.”

Virgil Fuller is the director of the Chelsea Public Library and a friend of West’s. (She’s officiating his upcoming nuptials.) Fuller notes that in Vermont, as in other states, library funding is tight, and that’s why he feels state libraries are fortunate to have West as an advocate. “She does nothing but good things for libraries,” he says.

West understands and even embodies the challenges that small libraries face in the digital age. While her current project may result in a GPS-tagged, interactive website, she says, she is delighted to be using an obscure, out-of-print book as a source in its creation.

“Oh, man,” she exclaims, glancing at her iPhone. “I forgot to check in on Foursquare at the other library!”

The original print version of this article was headlined "Information, Please"