Jennings & McComber, 'Will You Leave the Light On?' 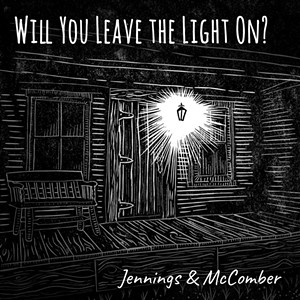 Orange County's Jennings & McComber specialize in what Guy Clark called "that old-time feeling." The folk duo's moniker actually comes from the past, too. Known to their family and friends as Kara and Andy Lake, the couple took their stage name from their grandmothers. The duo's second album, Will You Leave the Light On?, is a beautiful piece of work, their best yet.

This album is a clear evolution from their 2016 debut, Let Fall the Fine. They obviously came to the studio with a careful plan and some lessons learned. They also had an experienced collaborator in producer Kristina Stykos, owner/operator of Pepperbox Studio in Chelsea, where the album was recorded.

The improvements here are all in the finer points, especially the mixing and sequencing, because these two have been exceptional songwriters from the start. Every track plays like a short film. The Lakes' gift for storytelling and small, heartbreaking details makes for some unforgettable moments.

The album opens on a melancholy note with "Miserere," a sad and lovely funeral song that sets the tone for a cohesive, focused set. It's also an introduction to Kara's powerful vocal chops. From a wail to a whisper, she absolutely compels your attention.

Both of the Lakes are multi-instrumentalists, and Andy is a fine vocalist, too. So the LP has a tremendous amount of sonic and dynamic range — far bigger than your average folk duo. Yet some of the most goose-bump-inducing moments are the barest, like the stripped-down, ethereal "Flame" or the title track, which closes out the album.

There's a lot of joy and celebration, too. "Lay Me Down" is an up-tempo sing-along that really cooks. "Effie's Song" is a sweet paean to parenthood that manages to avoid being too saccharine and sentimental. They also pay tribute to one of those aforementioned grandmothers on "Georgena McCumber's," a narrative family history of sorts set over a knockout arrangement. It's one of the best tracks in an impressive set.

Then there's the wistful ballad "Wintertown," another album highlight. Remarkably, it stretches past the six-minute mark, but you won't even notice. That's a testament to the power of the Lakes' performances and their knack for letting a song live and breathe on its own terms. Credit here is surely shared with producer Stykos, because the whole project sounds like a million bucks.

Vermont's bountiful folk scene is a blessing. But even in this crowded field, Will You Leave the Light On? is a high-water mark — polished to perfection, adventurous and ambitious. You can't escape the impression that Jennings & McComber have cracked some secret code. It takes a lifetime of work to make an album sound this good.

Will You Leave the Light On? is available at jenningsandmccomber.wixsite.com/j-mc. The duo performs on Friday, December 20, at Christmas at the Fern at the Wild Fern in Stockbridge.

Album Review Jennings & McComber Will You Leave the Light On?