Jennifer Hartswick, 'Something in the Water' 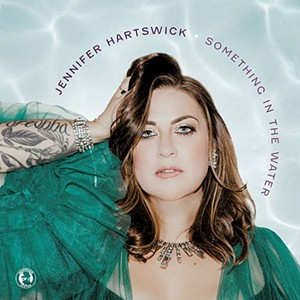 A woman I know who does STEM outreach with girls told me that something happens to them when they become teenagers. Keyed up about science and technology as middle-grade students, they often flame out in the years following puberty. What cools them off? She couldn't say specifically but could only speculate about a confluence of discouraging factors that plague young women as they grow up.

Singer-songwriter and bandleader Jennifer Hartswick touches on this unfortunate phenomenon on her new album, Something in the Water. On burbling centerpiece "By the River," the Trey Anastasio Band trumpeter describes free-spirited, dirty-faced girls skipping stones riverside, flying high on swing sets and playing with imaginary friends. They live freely, without self-judgment.

Hartswick constructs the song like a pep rally with clickety-clack percussion and deep blasts of trombone and trumpet. Here, and throughout her sophomore outing, her soaring voice is a focal point around which her world-class team of instrumentalists make merry. Of the many noteworthy guests, renowned bassist Christian McBride, a frequent presence at the Burlington Discover Jazz Festival, provides thrumming tones on seven of the album's nine cuts.

Cowritten with guitarist Nick Cassarino, the album showcases the long-standing partnership between the two Vermont expats. The songs touch on loss, regret and destructive choices — but also perseverance, contentment and joy. "We wanted to celebrate the human experience," Hartswick said in a press release.

The album kicks off with the rhythmically complex "Only Time Will Tell." Light on its toes, it skips along with syncopated start-stops, signaling a bookish bent toward music theory. But it's also colorful as hell, with Hartswick busting out velveteen scatting about halfway through.

Something in the Water balances bangers such as "By the River" with sweat-blotting slow jams such as "Guilty." The latter is as stripped-down as the album gets: Hartswick's vocals and McBride's bass chase each other in a loose parallel groove.

The song's honest lyrics echo its structural nakedness. "I been drinkin' / And I shouldn't come by, I know," Hartswick sings to a lover. An ode to bad decisions, the song plods through shame and regret.

With theatricality and precision, Hartswick and company weave together influences from pop music, neo-R&B, blues, gospel and a dash of acoustic rock. Hartswick is a sensitive but strong-willed protagonist who, despite the flaws she reflects upon, endears herself to listeners.

Something in the Water is available at jenniferhartswick.bandcamp.com.