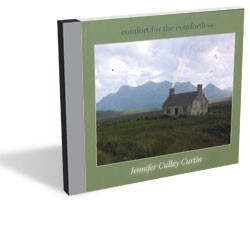 Comfort for the Comfortless is not really Jennifer Culley Curtin’s debut record. The central-Vermont-based vocalist has been playing music in various Celtic-inspired ensembles since the mid-1980s and has lent her voice to several recordings over the years. But as she notes in the sweet, wholesome bio on her website, her new album represents a new phase. So, in a way, this recording of 12 Celtic and British folk traditionals and covers is something of a debut. And Curtin is off to a striking start.

The album opens on the traditional “The False Lover Won Back.” It’s often said that the landscape of Vermont closely resembles that of the Emerald Isle. If this song is any indication, our green hills and frequent cloudiness aren’t the only similarities. Backed by a crack ensemble featuring multi-instrumentalist Colin McCaffrey on mandolin, citern, guitar and bass, Benedict Koehler on pipes and whistle, Hilari Farrington on harp, and Sarah Blair on fiddle, Curtin sounds as though her voice is emanating from some foggy loam across the Atlantic.

The singing is similarly evocative elsewhere on the disc. On the “Waters of Tyne” Curtin is sweetly mournful, delivering the sorrowful traditional with elegiac grace. She soothes on Kate Rusby’s “Sleepless Sailor,” and breathes salty vitality into the traditional shanty “One Penny Portion” — a duet with McCaffrey, who also engineered the album. Curtin’s solo performance on the a cappella traditional “I Am Stretched on Your Grave” is chilling and anguished. She lightens the mood on the following cut, “The Lady LeRoy,” which sways with an easy Celtic breeze. After a heartfelt take on Danny Carnahan’s “The Rose You Wore for Me,” the record closes on another solo a cappella traditional, “Airdi Cuan.” The lilting lament is a fitting end to a stirring debut, which is in turn a fine start to a new beginning.

Comfort for the Comfortless by Jennifer Culley Curtin is available at jenniferculleycurtin.com.