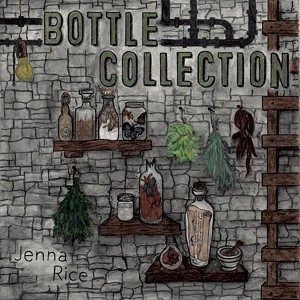 Southern Vermont songwriter Jenna Rice's debut LP, Bottle Collection, speaks (and sings) to the bravery of seeing through a labor of love — by itself, a praiseworthy accomplishment. However, for all of the good ideas and clever aesthetic choices Rice makes on her inaugural effort, she struggles at times to land the punch.

The record opens with "Get Up and Dance," a jaunty, folk-tinged, carpe diem sort of anthem. "So don't let anyone stand in your way / If you've got a card, just go ahead and play," she sings. Then, "Live your wildest dream while you have your chance / And while the music plays, get up and dance." Rice's detached delivery runs counter to the advice she's giving. That casual feel permeates her songwriting, a kind of musical shrug that can at times be cool but often falls limp. It's hard to encourage bravery when the source material isn't displaying much in the first place.

Rice writes tasteful progressions, a testament to her ability as a guitarist who can properly transcribe emotion through style. She has a deft right hand, is skilled in folk idioms, and manages to move her compositions along with the odd clever chord here and there. Her lyrical playing fills spaces with lovely texture. That's especially true on "Someone to Need Me," which features guest Ivan Goldstein's yearning dobro melody. "You're only here 'cause you have nobody," Rice sings on the chorus. "And I just need someone to need me."

That melancholy fatalism appears throughout Bottle Collection, and it's easy to appreciate Rice's ability to distill emotionally complex themes. The title track, for instance, laments the loss of a lover to war, a soldier gone to fight in Afghanistan who came home alive but not as the man he was. He withdrew into drinking until all he had left was his bottle collection.

Rice leans heavily into balladry and mostly adheres to genre traditions. A meandering quality permeates her melodies, which, depending on the song, can be an asset or a hindrance. On "Little Did I Know," her delivery adds a narrative style that twines so perfectly with the harmonica that it nearly transitions into bluegrass.

That same energy fails her on "Staring Back," another number focused on a broken man succumbing to the bottle. It could be a haunting song, but the lack of movement in the melody kneecaps the emotion so that Rice never fully brings the listener into her story. She does achieve that feat in places on Bottle Collection, however. And those moments suggest real promise amid an uneven debut.

Rice is also a visual artist and plays her own art opening on Friday, September 6, at the Long River Gallery in White River Junction. You can also catch her on Saturday, September 7, at Trout River Brewing in Springfield. Bottle Collection is available at jennaricemusic.com.