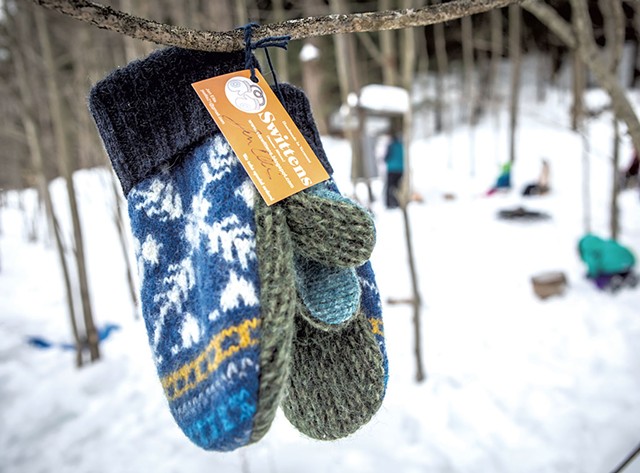 Jen Ellis has received emails from people in Russia, Israel, Norway, Ireland, France, Australia, Germany and across the U.S. The thousands of notes are mostly from folks who want to buy mittens — often numerous pairs — like the ones she made for U.S. Sen. Bernie Sanders (I-Vt.). He wore them at the chilly inauguration of President Joe Biden in Washington, D.C., on January 20, where other politicians sported sleek leather gloves in shades that matched their formal attire.

Seated with his hands folded over crossed legs, Sanders paired his big, woolly mittens — "swittens," technically, that Ellis fashioned from a repurposed sweater — with a disposable face mask and a Burton jacket. Sanders and his mittens instantaneously became a global meme, which thrust Ellis, a second-grade teacher at Westford School, into a state she called "weirdly famous."

The handcrafted mittens that catapulted Ellis to sudden celebrity were a gift to Sanders after his 2016 presidential run, when Ellis said she got "a bee in my bonnet" to make him a pair.

"I like him, and I was very disappointed that he didn't win," she said. "Bernie is a politician who is thinking about more than the 1 percent. He wants a better world for everybody. And I want that, too."

The viral mitten meme superimposed Sanders everywhere in the universe people wanted him to be — sitting on the rings of Saturn, crashing John Lennon and Yoko Ono's Bed-In for Peace in an Amsterdam hotel room, riding the Single Chair lift at Mad River Glen. When the ensuing media moment quickly and inevitably reached Ellis, she could be found where she usually was: at school or at home.

School during the pandemic is an indoor/outdoor classroom, where Ellis teaches 17 children. Outside, kids read in the woods and feed chickadees from their hands. One day, they made boats from bark and sticks, set them to sail on the river, and watched the wind carry them.

"The kids would go home with sticks in their hair and muddy knees," Ellis said, "exhausted but happy."

In her indoor classroom, Ellis has a telephone. The BBC called one day to talk mittens when she was in the middle of a lesson.

"I'm so sorry," Ellis told the BBC. "I'm teaching math, and I need to let you go." She suggested they send an email and arrange another time to talk.

"This is not my get-rich-quick moment, and I didn't need it to be." Jen Ellis tweet this

Home is in Essex Junction, where Ellis lives with her partner, Liz Fenton, a professor of English at the University of Vermont, and their 5-year-old daughter. Ellis recently celebrated her 43rd birthday there with takeout from A Single Pebble for her family and her neighbors. They shared the occasion over Zoom.

"Everybody is going to have a pandemic birthday," Ellis said. "And I hope that I don't have two."

In addition to the emails, media requests and, for a time, business proposals, Ellis also receives gifts from people she doesn't know. It occurs with such regularity that her students sometimes ask, "What did you get today, Ms. Ellis?"

Answers include a watercolor of the Bernie image that Ellis hung by the sewing machine in her craft room, three hand-knit scarves, earrings that are miniature replicas of the mittens, and numerous collections of books for her classroom.

"It's so very kind," Ellis said. "They think of me as a generous person who gave a gift, and they want to give me a gift."

Ellis has also acquired two lawyers — one specializing in entertainment, one in business — and a media manager to help her navigate post-meme life. Among her goals is using the mitten moment to raise money for nonprofits and to generate a spirit of giving in the larger community.

"This is not my get-rich-quick moment, and I didn't need it to be," Ellis said. "I have a job: I'm a schoolteacher. I have a really good job."

Ellis' "big desire for all this" is that a charitable component emerges from it, takes hold and grows. Toward that end, she's established Generosity Brings Joy, an online initiative that supports and showcases charitable work. The website includes her favorite Bernie memes and links to a GoFundMe campaign to raise $7,500 to pay lawyers and otherwise help fund the new endeavor.

"I am a person who religiously contributes to everybody else's GoFundMe," Ellis said. "But I've never had one."

Campaign donors include people from all aspects of Ellis' life — childhood friends, family and fellow teachers — as well as strangers. 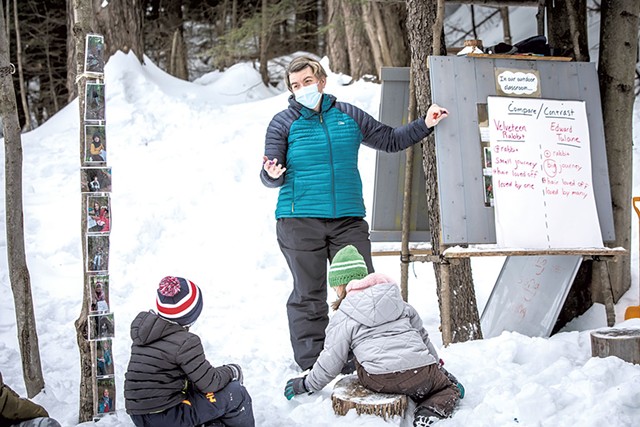 The support was especially meaningful for her, she explained, because the days following the inauguration were "extremely stressful."

Ellis said she felt physically ill and experienced sleepless nights over the prospect of capitalizing on the mittens in a way that would "rip people off."

"A lot of people were calling upon me to make the mittens and sell them," Ellis said. "I didn't want to do that. People shouldn't spend $1,000 for mittens. We have hungry neighbors. Let's give [the money] to the food shelf."

She made two pairs of mittens that were auctioned off to benefit local organizations. One pair raised more than $40,000 for Outright Vermont; the second garnered about $3,800 for Passion 4 Paws.

Ellis crafted a third pair, which she intended to sell on eBay to raise money for her daughter's college education fund. The winning bidder was a 12-year-old boy who had hacked into his parents' account, Ellis said. They told her they couldn't pay.

Ellis is hanging on to those mittens for now. She will continue to make the occasional pair to benefit Vermont charities, including mittens that will be raffled on Saint Patrick's Day for Steps to End Domestic Violence.

More formally, she's collaborating with Vermont Teddy Bear in Shelburne and Darn Tough Vermont in Northfield. The companies are manufacturing and selling products based on Ellis' mittens to raise money for local nonprofits.

"Jen's story grew so much attention and wonderful sentiment," he said. "Our [role] is to see if we could help her with the manufacturing of mittens to satisfy the level of interest she was receiving."

The company has received more than 20,000 emails from people around the world who are interested in the mittens, according to McCarthy. A portion of the proceeds will benefit Make-A-Wish Vermont.

"It's a great spotlight on the wonderful companies we have in Vermont," Ellis said.

An English major who graduated from UVM in 2000, Ellis is at work on a book "built around this moment." The memoir is tentatively titled Generosity Brings Joy.

"In the end, I chose the life I already had," she said, reflecting on her recent whirlwind. "I had crafted a life that already brought me joy, enough that when this other option was available to me, I could look it right in the eye and say, 'No, I want the life I already have.'"

Ellis grew up in South Portland, Maine, and moved to Burlington to attend UVM, the college where her parents met. After graduation, she trained in Houston to be a teacher through Teach for America, a nonprofit that enlists, develops and mobilizes teachers to work in low-income schools. It placed her at a rural high school in North Carolina, where she taught English.

Ellis said she approached that first teaching job, where she was only a few years older than some of her students, "with an open heart and an understanding that I didn't know what I was doing."

After two years in North Carolina, unsure of what would come next, Ellis returned to Vermont to hike the Long Trail. She worked in nonprofits and then as an educator for Chittenden Solid Waste District before deciding she wanted to be back in the classroom teaching kids. She earned her teaching certificate at the Upper Valley Educators Institute in Lebanon, N.H., and then taught for five years at Union Elementary School in Montpelier. She's been at Westford School for 10 years, teaching in what she calls a "gem" of a community.

Among the thousands of people who have reached out to Ellis since the inauguration is Sanders himself. He called to tell her that, through the sale of "Chairman Sanders" meme apparel, his campaign raised money for Meals on Wheels in Vermont, Ellis said. He thanked her for inspiring so much generosity.

Attempts by Seven Days to reach Sanders' campaign were unsuccessful. A January 28 article in the New York Times reported that his mitten meme merchandise had raised $1.8 million for Vermont nonprofits. Of that, $700,000 benefits Vermont's five Area Agencies on Aging for their Meals on Wheels programs, according to Tracey Shamberger, Age Well's director of public relations and business development.

"The two of us were really thrown into this together," Ellis said of Sanders. "He's used to that kind of spotlight, but I'm not. He just called to say, from one Vermonter to another, 'This is cool.'"