Jen and Kip Roberts, co-owners of Onion River Outdoors in Montpelier, are the epitome of "type 2 fun" people — the kind of fun that you enjoy having had, but doesn't necessarily register as pleasant while it's happening.

One winter, they were caretakers at the Monroe Ranger Cabin in Camel's Hump State Park, which didn't have running water or electricity. They got their water from a frozen stream near a pet cemetery on the property; to bathe, they heated it on a woodstove and doused themselves while standing in a Rubbermaid bucket, trying not to splash everywhere.

As we reenter the colder, darker days of pandemic-induced indoorsiness, getting into nature is imperative. tweet this

Of course, being outdoors in the winter doesn't have to involve that degree of discomfort. As we reenter the colder, darker days of pandemic-induced indoorsiness, getting into nature is imperative — something the Norwegians have known about for a very long time. Friluftsliv, which roughly translates to "outdoor living," refers to the concept of facing winter head-on, with good socks and a positive attitude.

Onion River Outdoors, tucked away on a cute side street in downtown Montpelier, has a multitude of good socks, along with a trove of warm layers and various foot enhancements for traversing snow and ice.

Jen, a former member of the U.S. Telemark Ski Team, and Kip enjoy backcountry skiing as a mode of mountaineering. But any apparatus that distributes your weight over a wider surface area (a phenomenon known, pleasingly, as "flotation") will help keep you from sinking into the snow and making your life — and the life of every hiker in your wake — miserable. The technical term for this wretchedness, according to Jen, is "postholing," a word that can also be refashioned as a noun.

Jen literally wrote the book on hiking in Vermont; the second edition of her guide, AMC's Best Day Hikes in Vermont, which features 60 treks, came out in 2018. (Kip and Jen's daughter, Indy, now 11, makes numerous cameos as a cherub-cheeked toddler.)

When it comes to winter hiking, said Jen, it's always best to assume something might go wrong. Once, she and Kip were at Camp Peggy O'Brien, a shelter in the High Peaks region of the Adirondacks, and decided to go off-trail in search of what they had heard were superb glades for backcountry skiing. They left their packs in the lodge and traipsed through dense woods for miles, until it became clear they were nowhere near the fabled glades.

Eventually, they gave up any hope of retracing their steps to the lodge and bushwhacked their way back to the trailhead. By nightfall, they managed to find their car — except the keys were still in their packs, 3.4 miles in.

"It was a good learning experience," said Jen. "Don't just assume that you can leave all your important stuff somewhere — your keys, your extra layers, your headlamp — even if you think you're just going a short distance and then coming right back."

Kip and Jen met in 2001 under a different set of inclement conditions. After working for 12 years as a caretaker for the Appalachian Mountain Club in New Hampshire and the Berkshires, Jen moved to Northfield, in 2000, to teach at an alternative outdoor middle school for students who struggle in traditional classrooms. The following year, she and Kip were both on the summit of Mount Hunger when a thunderstorm rolled in. They ended up racing down the mountain together. During that slippery descent, shouting at each other over the pouring rain, they discovered they lived just a few blocks apart. 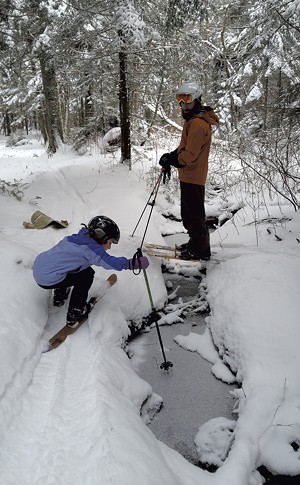 In 2003, Kip started working at Onion River Sports, the first incarnation of what is now Onion River Outdoors. Jen, then the trail director of the Northern Forest Canoe Trail — a 740-mile waterway from the Adirondacks to the Maine-Canada border — eventually got involved in the business as the manager of Onion River Kids. She also did some bookkeeping for the company, which included an online outlet and a shoe store.

In December 2017, when the businesses closed amid financial troubles, the Robertses raised enough money to buy back the store and reopen the following spring as Onion River Outdoors.

Like many outdoor retailers, the store saw huge demand in the early months of the pandemic. "We had very few staff then, and we could hardly manage it," Jen recalled.

The frenetic pace of early spring has leveled off, but since the end of August, they've been getting an unusually high volume of inquiries about their supply of backcountry and Nordic skis. "I think people are thinking that they're going to need to stay active," said Jen, "and that means snowshoes, backcountry skis."

Snowshoes, she added, are especially democratic: "All you have to do is walk." 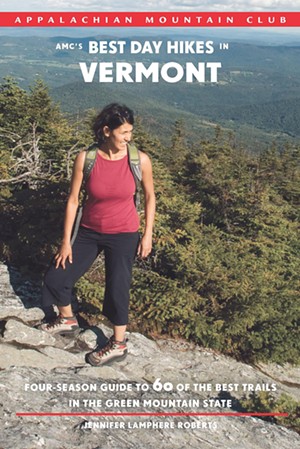 Find these and other hiking routes in AMC's Best Day Hikes in Vermont by Jen Roberts, published by Appalachian Mountain Club Books in 2018. $19.95.

For an easy outing: Grout Pond, in Stratton, is a 4.6-mile lollipop loop around what Jen describes in her guidebook as "the prettiest pond in Vermont." Her route includes a bonus body of water: Somerset Reservoir. "It's enormous, and there's very little access to it, so it feels remote and beautiful," she said. The hike around the pond is mostly flat, ideal for both Nordic skiing and tiny legs. Estimated round-trip time: 2.5 hours.

For some sweet views: Try Brousseau Mountain, a hidden gem in Norton, just south of the Vermont-Canada border. The 0.8-mile trail to the summit begins in an apple orchard and ascends steeply through sections of young and old-growth forest. The mountaintop, elevation 2,723, is treed, but just below the summit, a lookout rock offers spectacular views of Little Averill Lake and the dense woodlands of the Northeast Kingdom. On clear days, you can see the peaks of New Hampshire's White Mountains looming in the distance. Estimated round-trip time: 1 hour.

For a challenge: In the wintertime, White Rock Mountain in Middlesex, an exposed peak just south of Mount Hunger, definitely calls for microspikes or snowshoes. The trail, which winds its way up the summit like a spire, requires a bit of rock scrambling, but, along the way, you'll get stunning, 360-degree views of the topography of central Vermont — including Camel's Hump, Mount Mansfield, Mount Ellen and Waterbury Reservoir. Estimated round-trip time: 3.5 hours.

Gearing Up on a Budget

Winter trekking equipment can be pricey. If you're a beginner on a budget, Jen recommends renting first — Bolton Valley, for instance, offers cross-country ski and snowshoe rentals — and prowling your local Front Porch Forum for used gear. Onion River Outdoors occasionally stocks preowned items, and the basement of Outdoor Gear Exchange in Burlington is always a good resource. Onion River also offers free snowshoe rentals for anyone who wants to hike Montpelier's North Branch trail system. The trails get groomed, and you get to tromp around — a win-win.

Pack more than you think you need. "Food and water are obvious, but protection from the elements is probably one of the most important things you need to bring with you," Jen said. "Always bring a warm coat, an extra pair of mittens, an extra pair of socks, an extra hat. You should also bring some kind of insulation to put between yourself and the ground — you never know when you might come across someone who's injured and needs to wait for help to arrive." It's also a good idea to carry a lightweight nylon tarp and enough rope to rig up an emergency shelter.

Layer properly. Warmth begins with a good base layer — either wool or a synthetic material, such as Capilene, Patagonia's proprietary fabric — to trap body heat while wicking moisture away. For a mid-layer, think something downy or fleecy for insulation. Because New England winters tend to be damp, Jen recommends avoiding down as an outer layer: "When down gets wet, it's worthless." Instead, go with something light and waterproof, such as a Gore-Tex shell. (Kip Roberts prefers to rock a raincoat.)

Give yourself extra time, even if you know the trail by heart. "The days are shorter, so it's really important to be aware of when dark is and to pick a turnaround time," said Jen. As a general rule, assume that everything will take longer than you expect. Or, as Kip put it: "Don't start after 2 p.m."