Jeff Chester Says Computers are Spying on You 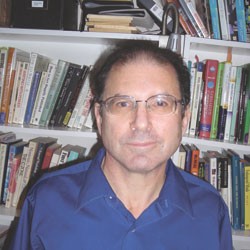 The last time you searched for something on Google or Yahoo, did you give a big corporation permission to track what you clicked on? Have you told Facebook that yes, it’s okay to monitor the interactions you have with friends?

These are trick questions. Digital media companies and advertisers are tracking your every move online, whether or not you know it or approve. The bottom line: Don’t assume anything you say or do on the Internet is private, because it’s probably not.

Jeff Chester, executive director of the Center for Digital Democracy in Washington, D.C., is fighting back. He’s been tracking issues surrounding digital media and privacy since the Clinton presidency. In the 1990s, Congress enacted a law protecting the online privacy of children under 13, but for the rest of us, there are no legal protections from companies that mine our data.

“A very powerful system of personalized data collection and advertising permeates the digital media system,” Chester says, “and very powerful technologies have been deployed to create far-reaching profiles of each of us, allowing companies, especially the largest ones, to unleash very sophisticated and largely stealth tactics designed to influence or direct our behaviors.”

Chester is speaking about Internet privacy and data mining on Thursday, September 22, at 7 p.m in Champlain College’s Alumni Auditorium. He spoke with Seven Days by phone from his office in Washington, D.C.

SEVEN DAYS: What is the gist of your talk at Champlain College?

JEFF CHESTER: The average online user doesn’t realize they face an onslaught of highly technical and pervasive data-collection services that not only track them in real time but instantly merge online and offline information about them. And through so-called online ad auctions or exchanges, run by companies like Google or Microsoft or Yahoo, we are now being sold in real time to the highest bidder.

All of this is being done without our awareness or consent. And so beyond privacy, this is a kind of Orwell-Huxley dystopic vision, this system that’s emerged. Because the idea that marketers and advertisers feel they have the right, without our consent, to sell access to us is manipulative and incredibly undemocratic.

This is the paradigm of digital marketing that bothers me: that companies feel they have the right to track us wherever we go, to collect information about our behaviors, to compile extensive dossiers that reflect offline and online information about our credit, health, etc., to create powerful ads to not only persuade us but to do it unconsciously, bypassing the natural decision-making process, all designed to get us to do something, buy something, read something, all being done without asking a basic question: Can I do this?

SD: What kind of information are data-collection companies taking from us when we use the Internet?

JC: They’re able to track where you go online, the websites you go to, what you do on an individual website. They know where your mouse may be on a particular page, where you start and stop a video. They know what you put in your shopping cart. They know who you communicate with in your social network, and they’re now able to measure your influence against your network of friends. So there’s a host of tools that allow them to identify and amplify what they know about you online.

What’s new is that they’re able to merge that online profile information with offline information databases, like what’s available through credit bureaus. So they’re able to know much more demographic and psychographic information about you. It’s the neighborhood where you live, it’s income, it’s racial identity. The offline-online mix gives them access to unbelievable amounts of fine-tuned data about an individual.

And with the growing popularity of smartphones and other location-based devices, they now understand your geographic behaviors and location. They’re able to integrate all that together. They know where you go, where you spend your time and, through mobile social networks, who you communicate with through your phone. The introduction of smartphones and social networks has given the data miners powerful new tools to track and analyze and potentially direct our lives.

SD: Can, and should, the government regulate how companies collect our data? Who can hold them accountable?

JC: I do think many of these techniques being used by advertisers and marketers are deceptive and should be prohibited or curtailed by government. Both the courts and the government have said if it’s a deceptive practice, it’s illegal.

But I don’t think any one person can deal with this system. The dramatic daily growth of the industry, in terms of its capabilities, is far beyond the ability of a single individual to cope with. Consequently, the government needs to come in with fair rules.

Because it’s a global system, and many of the same techniques are being deployed elsewhere, especially in the European Union, advocates have found an ally in Europe in terms of support for regulation. Given the experiences of totalitarianism and communism, Europe has developed a civil-liberties-focused approach to protecting privacy. It forces the United States to try to respond, because you can’t have companies regulated one way in one place in a global system, and regulated another way in another place. The Europeans haven’t been afraid to say, “Hey, people have the right, in this world, to be anonymous.”

It’s led to this idea here called Do Not Track. [Do Not Track refers to browser technologies that allow users to tell a website that they don’t want to be tracked.] Needless to say, companies are apoplectic about the idea that someone might want to go off the grid for a while. I think that’s a worthwhile goal.

SD: Is it even possible anymore to keep data private and out of corporate hands?

JC: These powerful, ubiquitous, autonomous systems of data surveillance are a part of our daily lives. There’s nothing stopping it. But there’s still time, and the compelling need, to tackle its excesses and its real threats.

Limits on the abilities of companies to collect political, financial, health, racial and other so-called sensitive data are on the front lines of our advocacy. I’m still an optimist, and I like to think that over time, as more people learn what’s going on, they’ll call for policies that rein in the data giants.

SD: What about the argument that personalized, targeted ads are more useful for the consumer? What if people see a benefit in advertisers knowing more about them?

JC: The online-ad industry says — and they’re being completely disingenuous when they claim this — that it’s all about a personalized experience. And there’s nothing wrong with a personalized ad. I think people today are being purposely socialized by Facebook and others to accept this kind of personalization without asking, as Dorothy did in The Wizard of Oz: “What’s behind the curtain?”

It’s one thing to get a personalized ad, and that could be useful, but people have to ask themselves, “If it’s about my health, or my finances, or taking information about me and using it to target my friends without permission, or selling my profile on these ad exchanges like a pork belly, do I care?” There need to be some limits, and the problem is that the industry doesn’t want any limits at all.

SD: The Internet has brought down the old walls of publishing, and anyone can start a blog and promote it through social media. But are big digital media companies curtailing media diversity on the Internet?

JC: One of the other areas that I’m concerned about is the growing control these digital gatekeepers, like Google and Facebook, have over what information we may receive. Increasingly, advertisers, unbeknownst to the larger population and working with Google and Facebook and other giants, have created so-called blacklists and white lists. [White lists are] websites that they’ve decided are appropriate for them to put content on and deliver advertising, but they’re blacklisting a host of other sites and services that they feel aren’t a conducive environment for their marketing message.

In the long run, this changes the flow of funding for information diversity online that could have a far-reaching impact. And the sites and services that reflect the Fortune 1000 culture are likely to get more financial support, leaving alternative voices to be pushed further to the margins.

SD: How can average web users protect themselves?

Jeff Chester will speak on “Digital Media at the Crossroads: Content & Control in the Internet Era,” on Thursday, September 22, at 7 p.m. in Champlain College’s Alumni Auditorium. Free. The event is sponsored by VCAM, RETN, and Channel 17/Town Meeting Television. Info, 862-3966. mymediavt.net