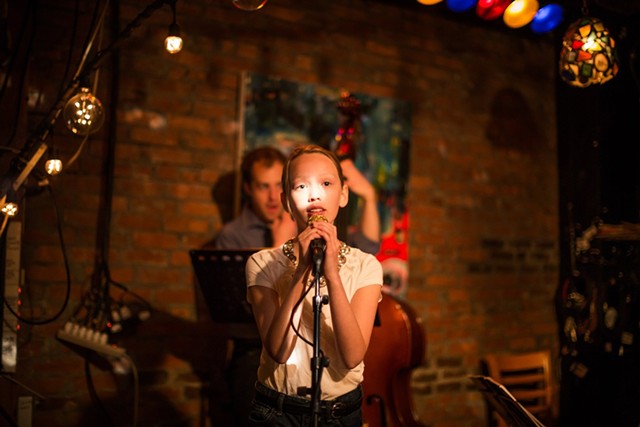 Asked how she decided to book a kid for a two-hour, paid gig, festival managing director Chelsea Lafayette said, "It was actually kind of funny." She had been looking for photos to market the event when she came across one of a young girl singing last year at Radio Bean. A festival photographer had captured the moment: dappled light, petite performer, chunky statement necklace, hands cupping a microphone.

A couple of days later, Lafayette got a call from a woman suggesting more festival programming for kids by kids. Her daughter would perform, the woman said; she sang at Radio Bean last year. And Lafayette made the connection to the photograph. "I was intrigued by that photo," she said, "and then I saw who was in her band, and I felt comfortable that it was going to be a really good, quality show."

Lulu will share the stage with four local musicians: pianist Randal Pierce, bass player Dan Bishop, cellist Cleo Flemming and drummer Colin Henkel. They're calling themselves Lulu and the Solar Flares. The seasoned pros and the seventh grader. She's just 5 feet tall and 87 pounds, but everyone who was asked about Lulu brought up her professionalism.

"I would say Lulu, for a 12-year-old, has a lot of composure," Pierce said. "As much as possible, I try to think of her and treat her as a professional singer — because she is."

Lulu played Small Alison in the 2017 Vermont Stage production of Fun Home, the Tony-winning musical inspired by Vermont cartoonist Alison Bechdel's graphic memoir by the same name. (Pierce was the show's musical director.) Because Vermont Stage is a professional theater, Lulu — just 11 years old at the time — was paid. She rehearsed for six days a week for four weeks and then performed 28 sold-out shows in one month. "That's grueling for anyone..." said Vermont Stage artistic director Cristina Alicea. "And if she was feeling worn thin in any way, she did not bring that into the rehearsal space."

Lulu is growing up in a two-story brick house full of music. Her parents turn it on in the morning to wake her and her 10-year-old sister, Clio, and it plays throughout the day. Because her dad grew up in New Orleans, jazz and blues are on heavy rotation. The family makes music, too. They sing rounds on the way to school. They own ukuleles, guitars, keyboards, flutes, drums and recorders. Dad Rob Barr plays harmonica and mom Maea Brandt is learning mandolin, but neither has played professionally. Barr is a tennis coach at Middlebury College and Brandt teaches drawing at Saint Michael's College.

Family videos show Lulu as a toddler "singing like crazy," her mom said. "And she's just so comfortable with it." Lulu was in kindergarten or first grade when she started getting small parts in Very Merry Theatre and school productions. She was 7 when she started taking classical piano lessons from Claire Black. "That was my mom's idea," she said. "At first, I didn't really like it."

Her first big break came in fifth grade, when she landed the role of Fiona in Very Merry and Edmunds Elementary School's production of Shrek: The Musical JR. Brandt remembers Lulu telling her about belting out a song for the first time during rehearsal. "And she said that everybody in the room turned around. And I think that's when she realized how much power she had."

When Robin Fawcett was hired to direct Fun Home, she contacted theater and teacher friends, scouting for kids to audition for the five children's roles. Shrek had closed, but Very Merry's musical director mentioned Lulu and invited Fawcett to see her perform in a Very Merry cabaret. "Her performance style was so natural, unforced and yet very richly expressive," Fawcett said. "It seemed effortless."

Casting Small Alison was tricky, Fawcett said. In addition to acting and singing ability, the actress needed stamina because her character is onstage for a large part of the show. Plus, she had to physically fit the role. Lulu was called back five times. She didn't seem to realize her talent, Fawcett said. She brought a "beguiling naturalness ... And she just had such a vivid imagination. And that showed in the auditions."

She arrived at the first rehearsal with all of her lines memorized.

Fun Home recounts Bechdel's coming of age story, her coming out as a lesbian, and her relationship with her father, a closeted gay man who, she suspects, may have died from suicide. The topics are heady and difficult, Brandt acknowledged, but she saw no need to shelter her daughter. "I sheltered her from pop music and television and junk food, but I'm an artist ... and this was art. This was the highest order of music and storytelling ... And it was the best way for a young person to learn about some very important and very sensitive issues."

Once cast, Lulu began singing lessons with Bill Reed, the South Burlington instructor whose students have performed on Broadway and in opera houses in New York and around Europe. "My voice became stronger and my range became larger," Lulu said.

A fan of Ella Fitzgerald and Nina Simone, Lulu plans to sing 17 songs at Jazz Fest, a mix of jazz standards — "O-o-h Child," "Fly Me to the Moon" — along with some Adele, Jamiroquai and Jess Glynne.

Lulu dips into her 12 years of life experience to bring heart to her music. Kids understand strong emotions "because they have strong emotions, too," she said. When onstage performing, she said, "I see, like, the lyrics or the notes on the pages, and all I can hear is myself. I just get lost in this world and don't come back until it's done."

Whatever her future holds, Lulu wants to keep singing. "Whenever I sing," she said, "it just lights up my world."

Catch Lulu and the Solar Flares at Radio Bean on Friday, June 7 from 3:30 p.m. to 5 p.m. and on the Burlington Discover Jazz Festival's stage outside City Hall on Saturday, June 8 from noon to 2 p.m.