Jay Nash, Letters From the Lost 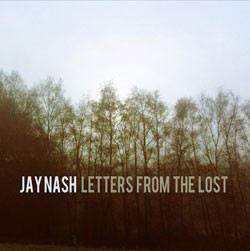 Last year, Vermont’s rock-star population increased by one when heralded songwriter Jay Nash relocated to the Green Mountains. The Los Angeles transplant hunkered down in his new home near Woodstock and recorded his latest record, Letters From the Lost. The album, his 11th, is the first Nash has written or recorded anywhere but in the City of Angels since 1998. Apparently, the country air agreed with him, as did the lack of immediate neighbors. Reportedly, Nash finds his new surroundings freeing, using the isolation to experiment with new sounds and approaches. That process could be a metaphor for the album itself, which focuses primarily on themes of losing, and then finding, oneself.

But what is it, exactly, that Nash has found? Throughout his robust career, he’s been regarded as a powerful writer and a soulful singer, an artist capable of blending pop proclivities with substantive lyrical content. You see the word “honest” tossed around a lot with regard to his work. Granted, comparisons to the likes of Lyle Lovett and Bruce Springsteen forwarded in certain critical corners were silly the moment they hit the page. But they at least suggested the type of artist Nash is, or maybe used to be. What he is now is trickier to define.

Letters From the Lost begins promisingly enough. “Wander” is a delicately atmospheric tune, propelled by an insistent guitar line that slices through a billowing, ethereal backdrop. Nash is undeniably compelling, alternating between a gruff, husky wail and smooth falsetto. But things devolve, and quickly.

“Twist My Arm” is aggressively inoffensive, adult-contemporary pop that wouldn’t seem out of place on an old Del Amitri record. And it sets a dubious tone for the remainder of the album.

Whether surrounding himself with overblown production as on “White Whale,” parsing a cloyingly earnest tale on “The Art Thief” or delivering cheesed-up L.L.Bean Americana on the supposed album centerpiece “Sailor,” Nash seems less an artist who has found himself than one who has lost his way. Gone is the artful nuance and tact of his earlier work, replaced instead by shamelessly dull cliché and pandering schmaltz — right down to the blundering alto-sax solo on “I Won’t Let Go.”

The album does resolve on an encouraging note. “Blame It All on the Wind” is a pretty acoustic guitar and voice number that suggests the real Jay Nash may still be in there somewhere, aching to be found again. Here’s hoping he is.

Letters From the Lost by Jay Nash comes out on Tuesday, May 14. It is available for preorder at jaynash.com.