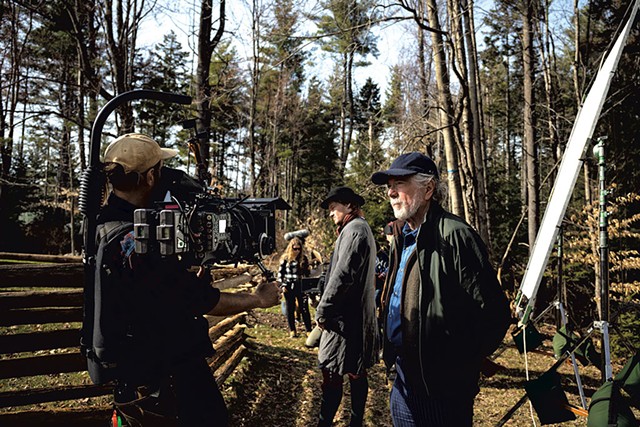 The log cabin in the Marlboro hills could have been a colonial-era home. A horse named Blue, pulling a wagon to the site, looked like a timeless creature. A pile of potatoes, centuries-old sustenance, sat on the dirt ready for planting at the homestead.

But sandbags held the thatch on the cabin roof in place. The horse had been trucked from Connecticut to stand in for a mule. And the cabin's occupants for the day passed up garden fare in favor of doughnuts, bananas and samosas.

Huddled by the cabin and walking the grounds, people wearing jeans and boots whispered into wireless headsets. They were careful not to make noise by crunching the dead leaves. But when a certain word was spoken, it was loud enough for everyone to hear: "Rolling."

That signaled action on the movie set, where, in late April, director Jay Craven and his crew wrapped the seven-week shoot of Lost Nation. With that simple direction, actors in period costumes — blouses, britches and long skirts — assumed their roles. They delivered lines such as "I'd say we're home, Abijah" and "Mrs. Prince, Mrs. Prince, white men are causing trouble down at the store!"

"I'm honored that Jay had faith in me to bring this character to life." Eva Ndachi tweet this

Lost Nation, written by Craven and Elena Greenlee, is an exploration and imagining of colonial America at the time of the Revolution and the founding of Vermont. On location at the log cabin in Marlboro — actually built 50 years ago, not 250 — the 18th-century historical drama intersected with 21st-century moviemaking, indie-style.

Actors used hand warmers to ward off the chill on the trailer-less set. Crew members sat on logs and tree stumps between shots and took rapid COVID-19 tests under a tent.

At lunchtime, cast and crew piled into three black vans with New Jersey plates and drove half a dozen miles to the campus of defunct Marlboro College. Bouncing over the ruts and grooves of a southern Vermont springtime dirt road, the fleet itself was film-worthy. Their reward when they arrived on the campus, where Craven taught filmmaking for 20 years, was a boxed lunch of roast chicken, polenta and vegetables from the Brattleboro Food Co-op.

Lost Nation is the 10th feature film for Craven, 71, who lives in Peacham. Craven's adaptations of the novels of late Vermont author Howard Frank Mosher, such as A Stranger in the Kingdom (1999), have made him a prominent figure on the local arts scene. His most recent historical drama, Jack London's Martin Eden, screens this week in Burlington, Montpelier and St. Johnsbury. (See our review). 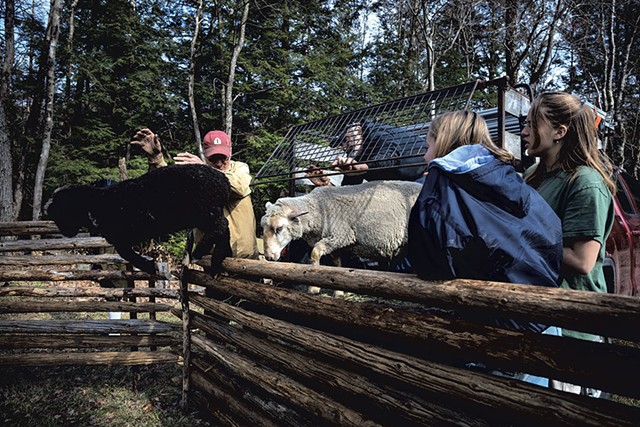 The director started writing Lost Nation in the winter of 2020, when he was teaching at New York's Sarah Lawrence College. He and his students produced a 185-page first draft. But his interest in Vermont history dates back to his arrival in the state more than 45 years ago. That winter of 1974, Craven was driving a borrowed truck with a load of firewood when the brakes gave out. He rolled out of the runaway rig and broke his arm. While recuperating, he spent time at the Vermont Historical Society reading about the state's early history.

Lost Nation, which Craven expects to release in a year, centers on real-life historical figures such as Ethan Allen and Lucy Terry Prince. Allen, born in Connecticut, led the Green Mountain Boys in the pivotal battle at Fort Ticonderoga and fought for Vermont's independence. Prince, born in Africa, came to this country as a young child who was enslaved. Her known history is "fragmented, at best," Craven said. She's the subject of a 2008 biography, Mr. and Mrs. Prince: How an Extraordinary Eighteenth-Century Family Moved out of Slavery and Into Legend, by Gretchen Holbrook Gerzina, a graduate of Marlboro College and former chair of the English department at Dartmouth College.

Prince's freedom was purchased by her husband, Abijah Prince, who also had been enslaved. They were landowners in Massachusetts and Vermont. Though not an attorney, Lucy acted as her own lawyer to defend her family from vandalism and harassment. Her poem "Bars Fight" is thought to be the earliest known poem written by a Black American.

Early in Lost Nation, the Prince family arrives at their Guilford homestead, which Abijah spent five years building. (The Marlboro cabin represents the home in the movie.) Allen and his militia also spent time in Guilford as part of his effort to enforce Vermont sovereignty. Some residents of the region, known as Yorkers, remained loyal to New York's claim on the land.

"Part of the goal of this film is to say that Vermont was racially diverse from day one," Craven said.

The filmmaker's career is rooted in Vermont — in particular, the Northeast Kingdom, where he founded two arts organizations, Catamount Arts and Kingdom County Productions. The latter, which Craven started with his wife, fellow filmmaker Bess O'Brien, is both a movie production company and a presenting arts organization.

Being an independent filmmaker has become "harder and harder" over the 30-plus years of his career, Craven said: "It's an impossible undertaking, really."

With the rise of streaming platforms, he said, movies have lost an aspect that was meaningful to him.

"For me, movies were about putting people in a theater [who were] watching together," Craven said. "It's a cultural phenomenon — more like theater than Hollywood." 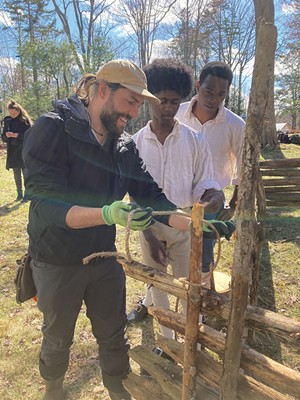 Lost Nation is an ambitious and sweeping project, with 43 speaking roles and a budget of roughly $2 million, Craven said. The movie is one of six he's made with a mix of industry professionals and student filmmakers who are enrolled in a program called Semester Cinema, based at Northern Vermont University.

Craven said Lost Nation will probably be the last movie he makes, at least in his current role as director and supervisor of the college program, which he developed.

"It's just so demanding at every level," he said. "I want to see if the [college] program itself can continue with younger leadership."

Forty-five students from 14 colleges are engaged in every aspect of the production, from script development to editing and set building to camera crew. Their tuition will cover about half of the production costs, Craven said.

Another $300,000 will come from tax incentives for filming in Massachusetts — a benefit that the State of Vermont doesn't offer. Scenes were shot on Nantucket, where cobblestone streets and brick buildings stood in for Philadelphia; interior sets represent the inside of the Prince homestead. The cast and crew also traveled from Marlboro to shoot in Colrain, Mass. To cover more of the costs, Craven aims to raise $100,000 through a Kickstarter campaign that ends on May 21.

"You're on a high wire with this," he said of movie financing. "And that just doesn't stop."

Craven calls Semester Cinema a kind of "Movie Smirkus" — a reference to Circus Smirkus, the Greenboro-based youth circus that he cofounded.

The students bring enthusiasm and energy to the endeavor, according to veteran actors and the director. "When young people are challenged, they will fully rise to the occasion," Craven said.

Del Zamora, a Los Angeles-based actor, plays Peter Squando, a Native American shop owner. It's his 108th movie and 274th production. Zamora, 63, whose TV credits include "The X-Files," "Murphy Brown" and "Hill Street Blues," said it was fantastic and refreshing to work with students.

"A lot of times on sets, people are jaded," he said, then riffed on the kind of remarks he might hear on a Hollywood set: "'Hey, I worked with Jimmy Caan.'"

The actors in Craven's film aren't "coddled or spoiled," Zamora noted. The atmosphere on set keeps a certain type away. "All it takes is one diva, and you have trouble," he said. "We all pitch in together."

Students said they're excited by the depth and breadth of their Semester Cinema education, which has ranged from learning technical skills to gaining a new and nuanced understanding of American history.

Katherine Gehring, a sophomore at Skidmore College in Saratoga Springs, N.Y., said that after two years of the pandemic, the collaborative nature of filmmaking made her feel "like a human being again."

"Being treated as a working professional has been really exciting," Gehring said. "Everyone here is so kind." 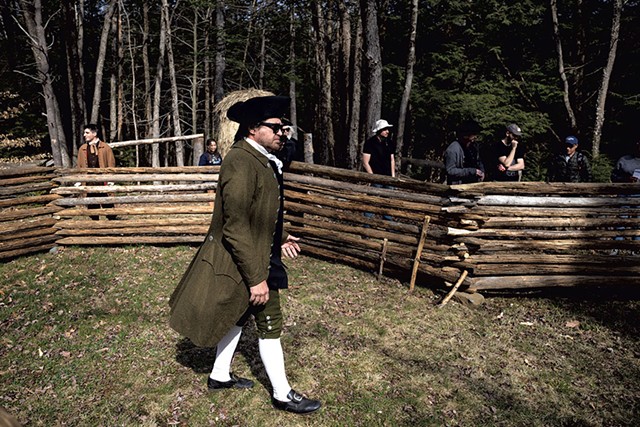 Karma Bridges, a sophomore at Spelman College in Atlanta, is on the camera crew and in the movie. An experienced actor, she auditioned for and landed the role of Drucilla Prince, Lucy and Abijah's daughter. (In real life, her father is the rapper and actor Ludacris.)

"I literally had no idea who Ethan Allen was," Bridges said. "It's one of the best experiences I've ever had. I get to do the two things that I love every single day."

Making Lost Nation was Bridges' first time in Vermont; she spent much of it waiting around for action and "sitting on the edge" of freezing.

"I understand that this is an independent film," Bridges said. "So I'm totally down for it."

Her mother in the movie is played by Eva Ndachi, an LA-based actor who was born and raised in Kenya. Ndachi said she didn't know Lucy Prince existed before hearing about the film, but she's "come to understand that this woman was a powerhouse."

"I'm honored that Jay had faith in me to bring this character to life," Ndachi said. "Acting is imagination. And I'm trying to imagine what Lucy would feel — which isn't very different from 2022."

At the end of that night's shoot, the family that lives in the log house reclaimed their home — if only for 18 hours, until work on the movie resumed. They turned on a string of lights in the shape of a heart that greets people outside.

"I think it's an important story to tell," said Ani Schaeffer, a teacher who lives in the house with her husband and their two kids. "Part of creating the state as a welcoming place is to show all of the narratives of the people who live here." More than half a century ago, her parents lived on a commune in Guilford beside the Princes' erstwhile home.

The next afternoon, crew members trickled onto the set ahead of the 4 p.m. call for a 12-hour shoot. They stocked the food tent, rolled (and pulled) camera equipment through the woods, and shot exterior images.

The original print version of this article was headlined "Final Cut?"