One of the final steps in the process of moving cheese from barn to cave to store belongs, at Jasper Hill Farm in Greensboro, to Alex Armstrong: He writes the farm's newsletter. In mid-September, he was preparing to spread the word about Bridgman Blue — cheese made from a mixture of goat's milk and cow's milk.

The natural-rind blue cheese, part of Jasper Hill's entry into the goat-cheese market, is about to make its debut.

But before writing, Armstrong said, "I have to have a good sit-down with myself and the cheese."

If Bridgman Blue could express itself beyond taste and texture, it would have an interesting story to tell. It begins six years ago, when husband-and-wife goat farmers Ryan Andrus, 38, and Annie Rowden, 31, traveled from northern California to visit Vermont Creamery, a goat-cheese operation in Websterville. As part of their trip, the couple also went to Oak Knoll Dairy, a goat farm in Windsor that produces bottled milk and supplies milk to Vermont Creamery.

Married partners George Redick and Karen Lindbo had established Oak Knoll along the Connecticut River in 1988. They started with four pet goats, then grew the herd and built a commercial operation. A decade in, the couple conserved their land with the Upper Valley Land Trust, using money from the sale of the development rights to buy milk-processing and bottling equipment. When Andrus and Rowden visited, they were impressed by the herd, then about 700 goats.

Andrus and Rowden are acquiring the herd and equipment in an arrangement that comprises an agricultural triumvirate: a succession plan for Oak Knoll's founders; a Vermont startup for Andrus and Rowden; and a new venture for Jasper Hill, whose cow's-milk cheeses have won national and international first-place prizes.

"For us, this is all about people," Jasper Hill cofounder Mateo Kehler, 49, said. "I don't know anything about goats. There's no way we would be doing any of this if Ryan and Annie hadn't reached out to us."

Kehler and Andrus met two years ago at a cheese conference in Denver: Andrus attended Kehler's talk about cheese as a tool for community and economic development; Kehler listened to Andrus talk about goat herd management and genetics. When he was back in California, Andrus sent Kehler an email that started a discussion about possible collaboration.

"We were looking for a way to integrate with a smaller company that had an emphasis on showcasing quality cheese through quality milk," Andrus said.

In the fall of 2018, Andrus and Rowden left the 1,300-goat herd they managed at acclaimed Cypress Grove creamery in McKinleyville, Calif., and moved to Hardwick. In partnership with Jasper Hill Farm, the couple bought a former cow dairy in Hardwick and named it Bridgman Hill Farm. (The deal involved the sale of a conservation easement to the Vermont Land Trust.)

The business partners then purchased a herd of goats and milk-processing equipment from Oak Knoll. Now, Andrus and Rowden produce goat's milk for Jasper Hill cheese, including Bridgman Blue, and later this fall will bottle liquid milk on-site.

The project represents a new direction for Jasper Hill, which has been making cow's-milk cheese since Kehler and his brother, Andy, started it in 2003. Graduates of Woodstock Union High School, they spent childhood summers at their family's camp on Caspian Lake in Greensboro.

The Kehlers' initial business plan was to generate about $550,000 in annual sales, according to Mateo Kehler. With the opening of the cheese cellars — an underground facility of seven aging caves — a decade ago, the business plans and projections grew. (Prior to building the cellars, Jasper Hill aged its cheese in the basement of Kehler's farmhouse.)

"Our whole MO is to build pipelines to markets where there's disposable income and we suck cash out where there's plenty of it," he noted.

In late June of this year, the first goats moved north from the relative warmth of Windsor to the 247-acre Bridgman Hill Farm in Hardwick, which Kehler called "the God-awfulest, coldest, windiest place in Vermont." (But it has a beautiful view due west to Mount Mansfield.) The goats have arrived in lots of 30 to ease their, and the farmers', acclimation. For example, Redick and Lindbo milk goats from the side while Andrus and Rowden milk from behind — an adjustment for the animals.

The incremental herd buildup is on pace with the establishment of the farm, some of which is still under construction.

"If you took all 400 goats at once, you'd probably want to take a trip to a sanitarium for a while," Redick quipped.

About half of the goats — a three-breed herd of Lamancha, Alpine and Saanen — are now in place at Bridgman Hill, where Andrus and Rowden milk in a retrofitted cow parlor. A 23,000-square-foot barn, equipped with access to the outdoors and lighting to maintain year-round milk production, is expected to be finished in mid-October.

"We're in startup mode," said Andrus on a recent afternoon at his farm. "There's a lot of goats and work coming. We'd like to have 700 goats milking within the next three to four years."

The Oak Knoll herd is healthy and "exceptionally friendly" because of the manner in which the goats have been handled, according to Andrus. The animals were a "big attraction" of pursuing the venture, he said, calling the Oak Knoll farmers "goat whisperers."

When new goats arrive at Bridgman Hill, they recognize their former farm-mates from Windsor. "They get off the trailer and they see the other goats and they're like, 'Oh, you're here!'" Andrus said.

Redick, 69, and Lindbo, 65, are keeping some goats to milk for the wholesale market. The sale of the majority of the herd ensures that the animals are in capable hands and the Oak Knoll brand will carry on. It also allows the pair to lessen their workload, Redick said. 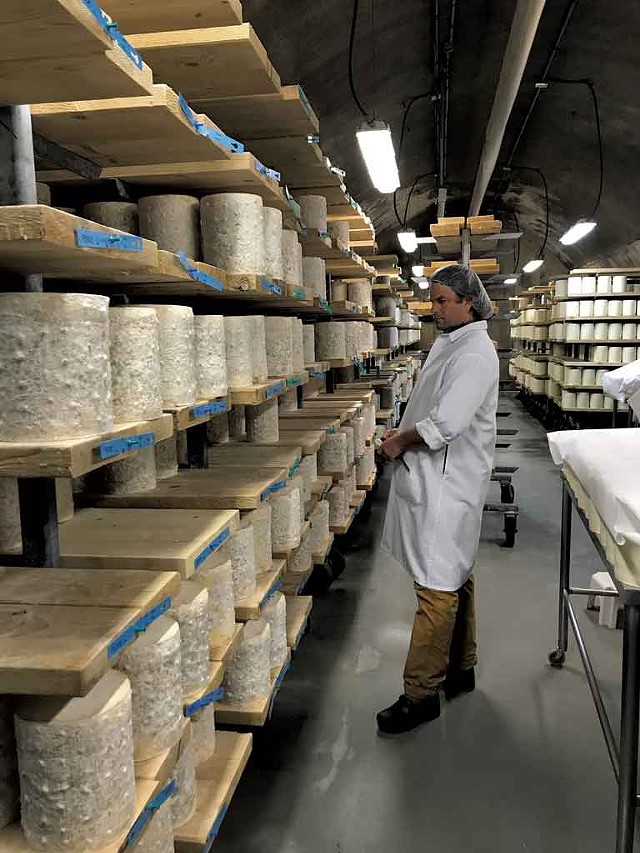 "It really is nice to know that the goats have gone to a really good operation," he added. "Ryan is dedicated to animal husbandry. He's studied the goat. He knows the goat. We've met a lot of people over the years, and we can't place anyone who could be better."

In November, the Hardwick dairy will start bottling and selling goat's milk, about 1,000 gallons a week, under the Oak Knoll name. Three cheeses made with a mixture of goat's milk and cow's milk are in development or production at Jasper Hill, and a drinkable yogurt is a future possibility.

"My responsibility has always ended at the milk tank," said Andrus. "Now it's all the way through, until it hits the mouths of the customers."

On a mid-September morning, with the temperature hovering at freezing, Nat Bacon, the creamery and quality-assurance manager at Jasper Hill, arrived at work at 2:30 a.m. He was there to receive a truckload of goat's milk from Bridgman Hill. Half an hour later, he was mixing it with Jasper Hill cow's milk in the initial steps of making Bridgman Blue.

Cultures were added to start the ripening process soon after the milk — roughly 600 gallons — was pumped into a stainless-steel vat in the cheesemaking room. When the fermenting milk contained sufficient acid, Bacon added rennet for that "magic moment" of coagulation.

By 8:15 a.m., other cheesemakers had arrived to assist him in placing the curds into about 100 cheese molds. These were turned through the day and into the night. Kehler's teenage son handled the final turning before bedtime.

The next morning, the Bridgman Blue was moved across the dirt road to the cellars, where it will age for about three months.

"Cheesemaking is a long day; you can't rush it," Bacon said, some five hours after he started work. "It's a labor of love."

A similar process took place in late June, when Jasper Hill made its first batch of Bridgman Blue. This week — after months of aging and another round of tasting — that blue could be deemed ready for release.

"It's all an adventure," Bacon said. "You have to listen to what the cheese is telling you."