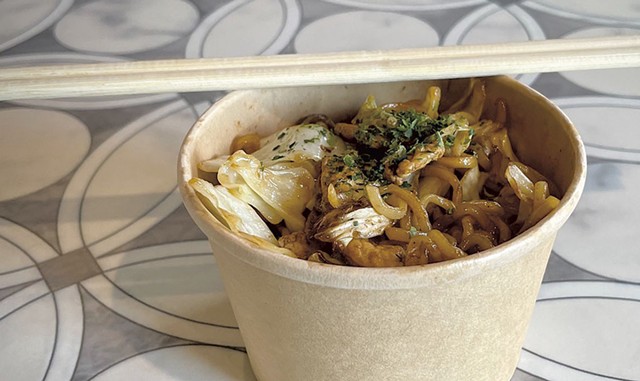 Taka and Liz Sato will open their first restaurant, Kaiju Kitchen, for lunch and dinner this summer. The couple has spent May and June giving St. Albans a taste of chef Taka's talents: maple syrup-sweetened matcha boba and Japanese festival foods, such as yakisoba, barbecued corn on the cob and soboro don. The limited weekend service was a way to kill time while they waited for an essential part of the restaurant's fire suppression system, they said.

The part has arrived, and Kaiju Kitchen will soon open its takeout-only business at 15 Center Street in St. Albans. Short and sweet, the menu sticks to Japanese specialties less commonly seen in Vermont, such as a bento box with karaage (fried chicken) and rice, Japanese curry, and a noodle dish.

Don't expect raw fish or hand rolls. "I was a sushi chef in Japan and in the U.S., too," Taka said. "I can make sushi, but I have to buy good-quality fish from Japan."

That sourcing would make sushi price-prohibitive for the sort of place the Satos want to run in St. Albans, where they have lived for a decade. They envision Kaiju as a place for customers to grab affordable Japanese cuisine that's "visually pleasing, delicious, filling and quick to get," Liz said. "We're catering towards busy parents, like we are."

Kaiju Kitchen took over the longtime Evelyne's on Center location after Nourish moved to North Main Street in the spring. It will be open for lunch via online ordering and pickup during the week, dinner on Monday and Friday and boba tea and treats on Saturday. Starting this week, Kaiju will also serve snack-size yakisoba and boba on Wednesday evenings for customers headed to the St. Albans Summer Concert Series in Taylor Park.

"This is Taka's restaurant, but the community support we've had in getting to this point has been heartwarming," Liz said. "What a great place to finally open a restaurant."

The original print version of this article was headlined "Japanese Takeout Spot to Open in St. Albans"