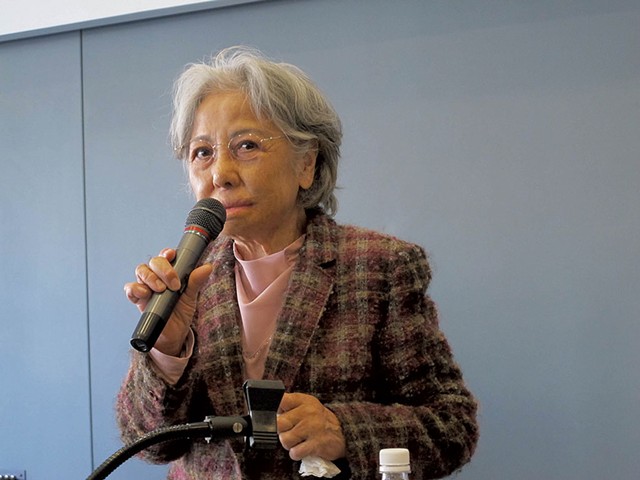 Shigeko Sasamori was 13 years old on the Monday morning of August 6, 1945. She can still remember looking up at the "beautiful blue sky" and seeing a large B-29 bomber flying overhead in her home city of Hiroshima, on Honshu Island in Japan. Seconds later, as she recalled in Steven Okazaki's award-winning 2007 documentary, White Light/Black Rain: The Destruction of Hiroshima and Nagasaki, she was engulfed in "a white thing" and was immediately knocked unconscious.

When Sasamori came to, after an unknown period of time, the world as she'd known it was gone. Sasamori, who was less than a mile from ground zero of the first atomic bomb blast of World War II, was so badly burned as to be unrecognizable, even to her own family. She finally reunited with her father after days of wandering the annihilated city and repeating her name and address.

Now 86, Sasamori is a hibakusha, or survivor of the atomic bomb blasts at Hiroshima and Nagasaki. Yasuaki Yamashita, 79, was 6 years old when U.S. forces dropped a second atomic bomb on Nagasaki three days later. The two hibakusha will visit six Vermont schools this week and share their eyewitness accounts with students and the public.

The event, titled "Hibakusha Stories," is sponsored by the Burlington chapter of the Women's International League for Peace and Freedom, the organization Hibakusha Stories and the nonprofit Youth Arts New York.

Maho Takahashi, 39, is a Burlington-based peace activist and organizer of the Vermont "Hibakusha Stories" events. A native of Japan, she has worked for years with Peace Boat, a Japanese nongovernmental organization founded in 1983. It operates an international cruise ship dedicated to promoting human rights, global peace, nuclear disarmament and a sustainable planet.

Since 2008, Peace Boat has brought more than 170 hibakusha to countries around the world to share their eyewitness accounts of the horrors of nuclear weapons, Takahashi explained. Peace Boat is part of the International Campaign to Abolish Nuclear Weapons, or ICAN, which was awarded the 2017 Nobel Peace Prize for its work in promoting the United Nations Treaty on the Prohibition of Nuclear Weapons.

"For a long time, there was also strong discrimination against hibakusha," she said. Why? "It's a fundamental misconception that people have about [nuclear] radiation ... Some people think that if they're near someone who was affected previously, they'll be affected, too, which is scientifically wrong."

After the war, for example, many hibakusha were unable to marry because their prospective partners' families opposed the unions, fearing the couple's children would be affected by the radiation exposure.

Takahashi noted that a similar form of discrimination has since befallen survivors of the Fukushima Daiichi nuclear disaster of March 2011. She said that some Japanese avoid going into a restaurant or store if they see a car with Fukushima license plates parked outside, for fear of "contamination."

"Hibakusha Stories" is scheduled to visit four Chittenden County high schools and two colleges and will include discussions with Dr. Kathleen Sullivan, an author, nuclear disarmament educator and consultant to the UN Office for Disarmament Affairs, and with Robert Croonquist, an educator and founder of Youth Arts New York. The September 19 event at the University of Vermont Davis Center is free and open to the public.

This is the first visit to Vermont for Yamashita, who's now a painter and ceramics artist living in Mexico City. Sasamori has visited Vermont before and has spoken to students at Middlebury College, Takahashi noted.

"She's come through some health challenges this year," Takahashi added. "But she is very determined and committed to travel anywhere that the invitation comes and share her experiences. She is so full of spirit and love."

It's worth noting that the average age of hibakusha is about 82, she said. As of 2014, fewer than 1,000 were still alive, and their numbers dwindle each year, making this event a rare opportunity.

"Now is a crucial time. We won't have the hibakusha forever, people who experienced [nuclear war] firsthand," Takahashi added. "So I think it's so important for us all to listen to what they have to say and make sure that we don't create the next generation of hibakusha. And that can only happen when people come together."