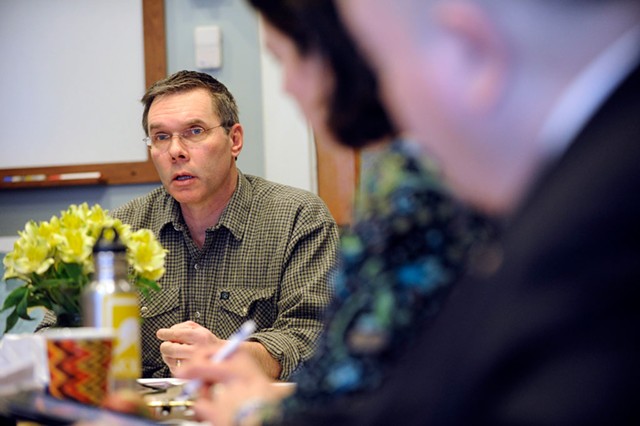 Two weeks ago, I reported on a fake website for the Democratic gubernatorial campaign of environmental advocate James Ehlers. Since then, the site has been revised, taken offline and then revived under a new domain name. And the saga around it has gotten stranger and stranger, with Ehlers and prominent Republicans throwing some serious accusations at each other.

The original site, jamesehlersforvermont.com, was a nasty piece of work, full of personal attacks and juvenile humor.

The new site, jamesehlers4vermont.com, has toned down some of the extreme stuff and adopted a new focus. It now features screenshots of Facebook posts supposedly taken from Ehlers' own page.

The posts in question include cartoons and memes attacking President Donald Trump, along with accompanying captions allegedly written by Ehlers that are profane and vulgar and attack Vermont Republicans for failing to adequately distance themselves from Trump.

Ehlers says the screenshots are fakes. But some Republicans say they were taken aback last winter by his online behavior, including posting harsh negative comments on their Facebook pages and "tagging" them so that the offensive posts showed up on their own timelines.

"Ehlers was attacking any Republican who was not disavowing Trump," says Rep. Kurt Wright (R-Burlington). "I talked with a number of people at the Statehouse. We were all wondering, What happened to Ehlers? He was out of control, just launching on people."

When reached by phone on Monday, he claimed never to have visited the fake site and refused to even entertain the allegations. "I'm not going to spend my time responding to the nonsense they crank out," he said.

He asked for the screenshots to be emailed to him. Afterward, he responded via text.

"All fakes. Doctored captions," he wrote. "These are tactics of an ideology and party that want to distract us from their racist, homophobic, classist, misogynistic trickle-down. [Gov. Phil] Scott needs to find some surrogates with integrity. Not playing their disgusting games."

The material does not currently appear on Ehlers' Facebook timeline. He has denied altering anything.

It's simple to fabricate stuff like this, and the fake website was created anonymously: There's no way to identify the people behind it. And the site itself doesn't speak well of its creators' ethics. The Vermont Attorney General's Office has received complaints that the site violates campaign finance law by failing to identify those responsible; the complaints are currently under review.

But Wright is not the only Republican questioning Ehlers' online behavior. Len Britton, a former Republican candidate for U.S. Senate who now lives in California, says, "After the election, [Ehlers] started putting up aggressively nasty Facebook posts about the incoming president, what a bad guy he was, and lumping all Republicans with Trump. Vulgar, nasty stuff. Very hateful."

Former Rep. Job Tate (R-Mendon), a Navy reservist who resigned from the legislature in April when he was recalled to active duty, told his story via email from the Horn of Africa, where he is currently deployed.

"I always enjoyed James' company," Tate wrote. "He's an unapologetic intellect who has devoted his life to a worthy cause, and I find those types pretty engaging. We also had the shared fraternity of our service to the Navy, upon which we had built an easy, friendly rapport." (Ehlers served four years in the Navy.)

All of which, he added, made Ehlers' online behavior "that much more mystifying."

During the campaign, Tate said, Ehlers often posted argumentative comments on Tate's Facebook page. "As the fall gave way to winter, his ire seemed to increase," Tate wrote. "His comments became more pointed (and obscene) and he would often tag me (and others) in his own Facebook posts."

Tate, who uses Facebook to stay in touch with family and friends, "made many, many requests for him to cut back the tone of his comments ... to a PG-13 level."

Instead, the posts grew "increasingly unhinged," and Tate resolved to confront Ehlers.

"When I saw him in the Statehouse card room, I said, 'James, I need to talk to you,'" Tate related. "He raised his shoulders in a 'What, me worry?' way, smiled and sped away. Literally picked up speed ... On another occasion, I told him from across the entryway into the House that cyber-bullying is a serious national epidemic, and he once again smiled and made a beeline in the opposite direction.

"Ehlers remains the only soul I've ever 'blocked' on Facebook," Tate concluded. "The act itself felt childish of me, but I really felt it was the only way to end the saga."

When asked to respond to Tate's account, Ehlers labeled it "fiction" and blasted Tate's "failed attempts ... to advance his anti-woman agenda at the expense of immigrants, suppress wages, deregulate eco protections, and sponsor tax-break bills for his affluent friends."

There are enough independent complaints that it's hard to write off the allegations against Ehlers as a political dirty trick. But as long as the creators of the website remain anonymous, there is no way to verify the truth of its claims — or the authenticity of the screenshots.

One thing's for sure. If this keeps up, the 2018 campaign is going to be a barn burner.

A former union official is making waves in Vermont's labor community and is beginning to attract attention from the national conservative media. That's because Ben Johnson has committed what some see as the ultimate betrayal: The onetime president of the Vermont AFL-CIO and American Federation of Teachers Vermont has come out publicly in favor of right-to-work legislation.

And he's done so in a big way: with a video and a lengthy essay posted on the website of the National Right to Work Committee.

Right-to-work laws prohibit a union from collecting dues from workers if they have not joined the union or agreed to pay. Labor leaders see this as a deathblow because, they say, workers can opt out of paying dues and still reap the benefits of collective bargaining. The result, they claim, is a downward spiral for unions.

Johnson left his leadership posts in the summer of 2016. After that, he says, he undertook a period of soul-searching. "The labor world is a massive bubble," he says, wrapped up in its own worldview. Getting outside the bubble gave him fresh perspective.

And while he has "tremendous affection for the union," he has come to see unions' ability to collect fees from workers as a crutch. Right to work, he says, would force unions to convince workers to part with their money.

He says the words posted on the NRWC website are entirely his own. "I was not paid for any of that," he says. "I'm not on their payroll. They haven't hired me for anything."

Some Vermonters who fought alongside Johnson for years are dumbstruck by his conversion.

"Those of us working hard in the labor movement see this as deeply, deeply disappointing and surprising," says David Mickenberg, an attorney and lobbyist who works on behalf of Vermont unions.

Jill Charbonneau, who succeeded Johnson at the Vermont AFL-CIO, measures her words carefully. "I'm surprised at his departure from trade unionism," she says. "It's unfortunate."

Much harsher views can be found on the Facebook page of former AFT organizer Kelly Mangan of Burlington. She posted a link to Johnson's video, which prompted comments along the lines of "disgusting worm," "piece of shit" and "scum."

Johnson claims not to be concerned about burning bridges. "I don't think you can lose friends over something like this," he says. "I've spoken with my actual friends, and they understand where I'm coming from." So his union colleagues were fake friends?

Johnson has launched a new consulting business, Progressive Labor Solutions, which offers his services to employers dealing with established unions or with organizing campaigns. If that sounds like a former insider selling secrets to the other side, he insists that's not the case.

"I know issues that agitate employees," he says. "Employers are often blind to them. I want to work with employers who want to develop a thoughtful, systematic approach to their employees, not those who just want to make the problem go away."

At the same time, he hints of a darker view of union shops.

"When workplaces organize, there are lots of things that change," he says. "It's much more difficult to address individual situations. It becomes a militarized workplace."

He should hope his consulting business is a success. It's hard to imagine he'll ever get another chance to work for a union.

There's a new and unusual entrant in the Vermont blogosphere that aims to provide a thorough understanding of how the state is governed.

The Informed Vermonter promises a comprehensive yet readable guide to state government, with a particular focus on finances. And perhaps most unusual for a blog, it takes the long view, eschewing the give and take of current controversies.

The website, theinformedvermonter.com, is the brainchild of Malcolm Stewart, a retired investment banker who splits his time between his hometown of Randolph and London, England, where he spent part of his career. The Informed Vermonter is the unplanned product of a postretirement research project that took Stewart two years to complete.

"I was steeped in financial research, and I'd always been curious about government," he says. "I delved into it. I looked at the town of Randolph, the state of Vermont and the federal government, all through a fiscal lens."

When he finished his work, he says, the next question was, "What do I do with all of this?"

The answer: a website sharing the fruits of his labor.

The first four posts, he says, will provide "a refresher in basic civics." After that, a short course on Vermont economics. "Then, I'll look at every single aspect of government — here's what they spend, here's where the money comes from," he says. He says he will try his best to stick to the facts and eschew opinion, although he acknowledges that his readers will be the judge of that.

And here's another unusual — likely unprecedented — aspect of Stewart's venture: Before he launched the site, he had already written four months' worth of posts, "which cover the entire government."

Stewart promises a new post every three days until the end of this year. After that, he'll start exploring related subjects. "There's no shortage of topics," he says.

Ain't that the truth.

The original print version of this article was headlined "Keyboard Warfare"