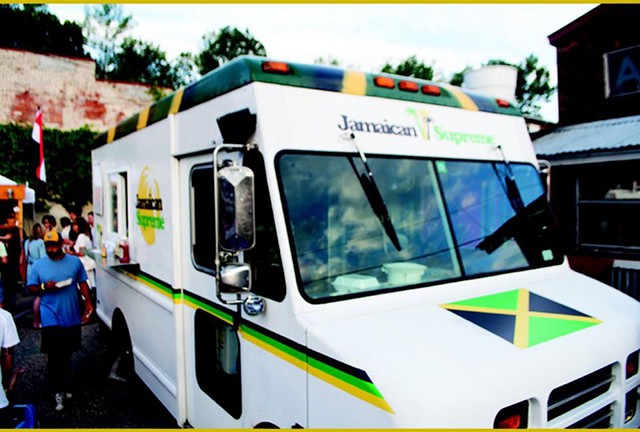 For four years, Bilon Bailey has been dishing up curried goat, jerk chicken, beef patties and fried plantains from his Jamaican Supreme food truck. Now he's adding a part-time brick-and-mortar location to the mix. Beginning this weekend, Jamaican Supreme will serve lunch and dinner in the Little Red Kitchen at 505 Riverside Avenue in Burlington on Fridays and Saturdays.

Customers familiar with Bailey's cooking will find all their old favorites, plus new items. Red pea soup, made with kidney beans, will be a signature, he said. He'll make wine cake, too: "It's pretty much like every cake you're used to, but it's just the Jamaican version with fruits in it," Bailey said. "It's a pretty awesome thing." Over time, he plans to bring in Caribbean soft drinks such as champagne kola (yup, it's a soda) and grapefruit-flavored Ting.

Bailey started the truck when he moved to Vermont in 2013, because, he recalled, on nights when he wasn't cooking, he couldn't find the kinds of dishes he wanted to eat. "If I feel this way, there are many more Jamaicans around here who have the same feelings," he suggested.

He's expanding to meet the demands of a growing Jamaican population, he said, and of newcomers who've developed a taste for his food. Then there's his insatiable passion for being at the stove. "Everybody in my family cooks," Bailey said, noting that some of his relatives have run a Jamaican restaurant in Rochester, N.Y., for the past 35 years. "It's not too much about money. I just love to do the cooking. I let food be my medicine, and my medicine be my food."

For now, Bailey will share the space with Cheryl Strenio, owner of the Little Red Kitchen, who whips up her famed Parmesan dip there. He'll stick with weekends, he said, "until things manifest."

The original print version of this article was headlined "Island Flavors"