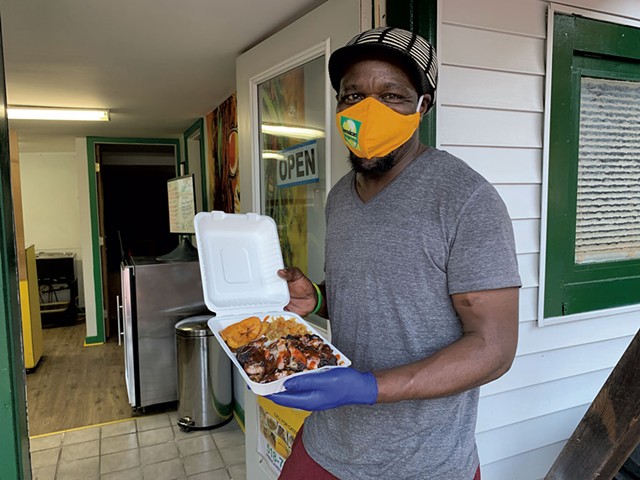 This year, chef-owner Bilon "Richie" Bailey will cook up jerk chicken, curried goat, and red pea soup in his Jamaican Supreme food truck all winter. But that truck will stay parked beside a small shop at 469 Lime Kiln Road in South Burlington, behind Koenig Cedar. Bailey cooks in the truck and fills orders out of the new white-sided storefront.

In addition to his patties, his hearty portions of coconut rice topped with a choice of meats, and his sides of fried plantains and cabbage, Bailey offers a few packaged products, such as canned ackee fruit and soursop leaf tea. The drinks cooler contains Jamaican sodas, such as Ting and Jamaican Kola.

Bailey opened his food truck in 2015, two years after moving to Vermont from Jamaica. He usually closes in the winter, but the pandemic kept this summer and fall much quieter than usual. "Business was kind of slow," he said. "I'm trying to stretch out the season."

Paul Koenig, president and owner of Koenig Cedar, became friends with Bailey through the food truck. A frequent traveler to Jamaica, Koenig said he appreciates the food and culture.

Bailey stored his two food trucks behind Koenig Cedar last winter. After seeing his friend's business suffer from the pandemic, Koenig offered his old tool repair shop for Bailey to renovate into a storefront that he could use to stay open through the cold weather.

The original print version of this article was headlined "Winter Warmth"