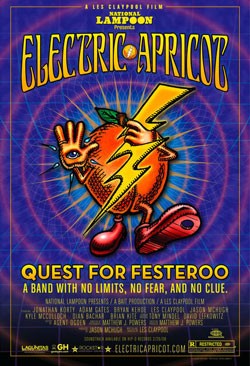 If San Francisco, birthplace of the Grateful Dead, is the jam-band Mecca, then Burlington is the Medina. After all, Phish reinvented the genre over a couple of decades of touring, spreading the jam-rock seed wherever extended improvisation and Jerry worship found nurturing soil.

So it’s fitting that Burlington is playing host to Electric Apricot, a cinematic skewering of a fake band of the same name (think Spinal Tap), written and directed by and starring Les Claypool of the band Primus. It’s the first in a mini-festival of music films to be shown at Merrill’s Roxy Cinemas.

The film was an opportunity for producer Jason McHugh to “make fun of everything I’ve held sacred up until this point,” he says in a phone conversation.

“I go to Bonnaroo [Music & Arts Festival] every year . . . I go to Burning Man every year,” McHugh offers. “So I actually love this kind of music. But let’s face it, in the wrong hands, jam-band performances can be a nightmare.”

The film opens with smoky, late-night clips of Electric Apricot fans commenting on band performances. One covers his watch with a bandana, explaining, “Apricot performances exist outside of time.” Another describes the musical form as “like . . . free love with a bit of ass-shaking and, like, kind of just, kind of crazy, like . . . wow.” A third offers a less probing assessment: “I shat myself. It was awesome.”

Barely more intellectually cogent than their admirers, the members of Electric Apricot wobble toward the Festeroo Music Festival, a gig meant to represent a breakthrough for the band and its long-suffering manager, played by McHugh. Along the way come the requisite shake-ups and personality conflicts, and some deeply fractured attributions, such as bassist Steve butchering the philosophy of “Widkenstein.”

This is fun stuff for anyone who develops a migraine at the very thought of a 10-minute drum solo, but McHugh hopes that jam-band admirers will also get the joke. “For the most part,” he points out, “even diehard listeners get the fact that there’s some real flotsam and jetsam out there.”

The National Lampoon Productions release came out last year and is still playing in art-house theaters and small festivals, such as the one Roxy owner Merrill Jarvis kicks off this weekend. “It’s consistent with the vision of the Roxy — I want to keep expanding its list of films to include off-the-beaten-track titles,” Jarvis explains. “I’m also a huge Les Claypool fan, so there’s some selfish interest there, too.” mElectric Apricot shows at midnight at the Roxy on January 25 & 26 and February 1 & 2. The late-night music-film fest continues February 8 & 9 with Exodus-era Bob Marley concert footage. Check merrillthe atres.net for more upcoming films.