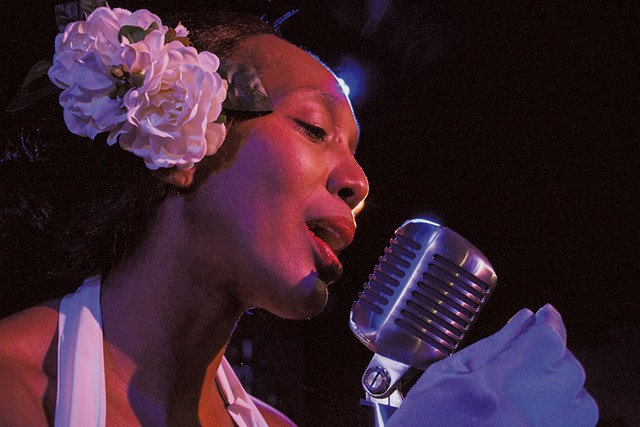 After notable successes in the Upper Valley, JAG Productions is finally taking a show on the road. Lady Day at Emerson's Bar & Grill, a Tony Award-winning play by Lanie Robertson, chronicles the life of treasured jazz singer Billie Holiday. JAG founder Jarvis Antonio Green directed the Vermont production, which is currently touring the state, with a stop in Burlington in early June.

It's not quite a one-woman show; Holiday (Francesca Harper) receives onstage support from her longtime accompanist, Jimmy Powers (Nygel Robinson). Together the two lead audiences through an evening of reminiscence, revisiting memories both joyful and painful. Holiday, affectionately called Lady Day, sings throughout the show.

The show played last weekend at the Engine Room in White River Junction and goes this weekend to the Grange Theatre in South Pomfret. Next, it will head to Main Street Landing Black Box Theatre in Burlington for June 7 to 10 performances coinciding with the Burlington Discover Jazz Festival, an ideal synergy for a play that is equal parts storytelling and intimate concert.

Green's enthusiasm about his work is infectious, and he's taken on ambitious projects, ranging from JAG's inaugural staging of Tarell Alvin McCraney's Choir Boy to the company's annual new works festival. Lady Day is no exception. It depicts an American icon, down to Holiday's beaded white gown, which was handcrafted specifically for this show by Vermont costume designer Holly Levison.

"If I'm going to speak about Billie Holiday, it's going to be with reverence and honor," Green says. "Her work paved the way for me to be here."

Harper notes that Holiday's example inspires her to give her all to the role. "She gives me strength," she says. "No matter how tired or how down and out, when she went onto the stage, she lit it up and gave her life."

Robinson, who has been playing the piano since he was 7 years old, says that, while his role is in the background, the play gives him opportunities to tease out Powers' tight working relationship with Holiday.

"The music is built very cleverly into the show," he reflects. "There are poignant moments when she gives me these eyes, and I know exactly what to play."

JAG Productions aims to support black theater artists and facilitate conversations "through the lens of the African-American experience," according to its mission statement, and Lady Day may be its most racially charged show yet. The show's arrival in Burlington marks a fraught period in race relations both locally and nationally. As Harper puts it, "There's a civil rights movement happening in our country right now."

Green describes the rehearsal process as "vulnerable and heavy," perhaps because the performers emphasize Holiday's reckoning with her past.

"It's not about putting on a play," he says. "It's about telling our version of the story and honoring our ancestors."

Green notes that JAG's previous shows "center around blackness in a way that doesn't talk much about their interactions with white people. [Holiday's] life as a jazz artist relied on her relationships with white people, and white supremacy really deteriorated her."

Holiday's life was a difficult one. A rocky relationship with her mother and sexual assault at a young age led her to take solace in music. In the 1920s, she moved to New York City, where she eventually became known for her distinctive voice and unique interpretations of classic songs. Though she had a successful career, it was tarnished by consistent racism. For example, when Holiday played certain hotels, she was asked to ride in the service elevators, and she was not allowed to patronize the nightclubs where she sang.

Childish Gambino's recent viral music video "This Is America" comes up a few times in conversation with the Lady Day troupe. The idea of the black minstrel who is beloved as entertainment but undeserving of justice has not disappeared from American culture, they note.

Lady Day's story puts the complexity of race relations in this country under a microscope, Green suggests. "There's something that throws me when white people tell me how much they love Billie Holiday," he says. "They'll say, 'She's so great, she's an incredible musician,' and to me it means they don't actually understand her life and her pain."

Lady Day features "Strange Fruit," one of Holiday's most famous songs, a haunting ballad based on a poem by Abel Meeropol about lynching in the South. The lyrics read in part: "Southern trees bear a strange fruit / Blood on the leaves and blood at the root / Black body swinging in the Southern breeze / Strange fruit hanging from the poplar trees."

Though the poem was written in 1937, the nation's sole memorial to lynching victims was erected only recently, in Montgomery, Ala.

"As an African American person, I have very little time to mourn, to be in pain or to share joy," says Harper. "It's that invisibility that we live with every day. This show is a reminder of the movement happening for black Americans right now: We're here, and our voices are important."