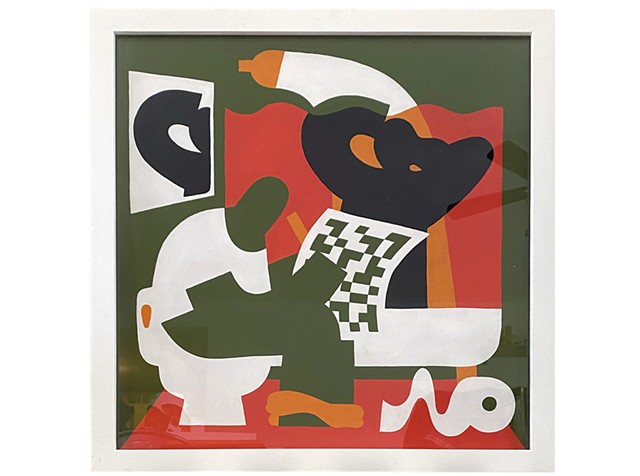 Fernando Botero Angulo is so renowned for the exaggerated contours of his figures that his signature style earned its own noun: Boterismo. In his paintings and sculptures, humans and animals are, to be blunt, fat. The 89-year-old Colombian's work comes to mind while viewing 30-year-old Jackson Tupper's exhibition, "Mayo," at the Safe and Sound Gallery in Burlington.

It would be a stretch to say the two artists are kindred spirits. If Botero's corpulent subjects are fanciful, the paintings are still grounded in realism. Tupper's work is graphic and highly stylized, rendered on a flat plane with a limited, unnatural palette. But he does take a volumetric approach to his subjects: Figures are both inflated and reduced to barely recognizable elements. Arms, legs and torsos are plump sausages; heads, if present, are vague round shapes with no features. Hands and feet are missing altogether.

"I have been approaching my paintings with the mind of a screen printer." Jackson Tupper tweet this

It's no surprise that Tupper draws inspiration from cartoons, in which simple line drawings can render figures infinitely and playfully bendy.

"I was always fascinated by cartoons and always sketched them," he said in a phone interview. "I made my own version of Charlie Brown and Calvin and Hobbes. To me it's fun, it's whimsical, and I love narrative — a very short story that can be told in a Sunday cartoon."

That helps explain Tupper's minimal, iconographic figures, objects and — in the suite of artworks for "Mayo" — foods, such as tomatoes, eggs and zucchini. And he loves not only visual jokes but also puzzles, which are reflected in his work both literally and stylistically. 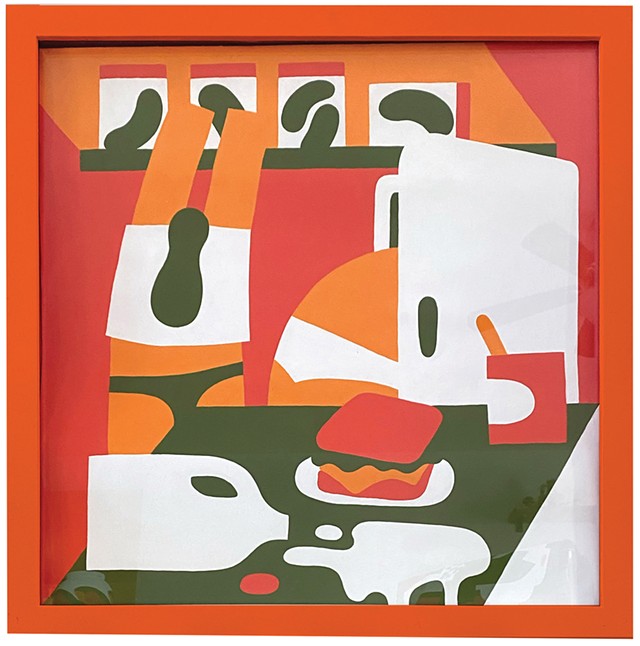 One example: A viewer might look for several minutes at the 30-inch-square painting "Morning Routine" before recognition arrives: The jigsaw-like shapes depict an olive-green man sitting on a toilet, crossword puzzle in (nonexistent) hand, while a woman is silhouetted in black behind him. Behind an orange curtain, a showerhead spews a white flow of water. On the floor, a roll of toilet paper seems to be making an escape, inchworm-like.

On an opposite wall of the gallery, an 11-by-14-inch painting aptly titled "Crossword" is just that — a black-and-white puzzle grid awaiting answers. Next to it hangs a large, hand-carved "pencil" bifurcated on the business end.

In the namesake painting "Mayo," a guy in tighty-whities leans into an open fridge as a ponytailed, T-shirt-clad woman reaches for something on a high shelf. A sandwich — perhaps awaiting the titular condiment? — sits on a table. Alongside it, a splotch of white indicates spilled milk from an adjacent jug.

The human characters in his domestic scenes represent himself and his girlfriend, Tupper confirmed.

If his artworks can provoke snorts of laughter, they also command admiration for their precise execution and elegant economy of form. Viewers might wonder whether Tupper has worked in product design — and they'd be onto something.

It wasn't just a "Peanuts" obsession that influenced his visual vocabulary. It was also a thorough grounding in fine art at the University of Vermont and subsequent years of working in graphic design and screen printing.

The Maine native graduated from college in 2013 and spent a summer interning at the former JDK Design on Burlington's Maple Street. He worked on production design, Tupper said, for one of the firm's foundational clients: Burton Snowboards. (Safe and Sound Gallery owner Marin Horikawa was then JDK's creative director.) 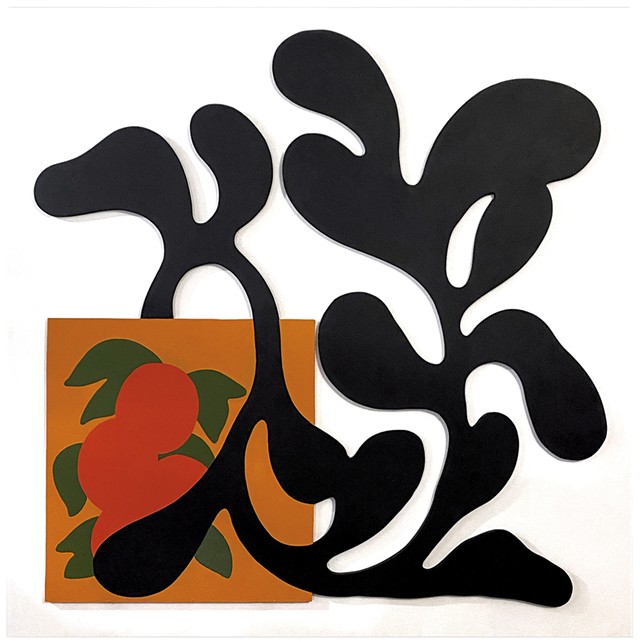 Tupper also got involved with the JDK-affiliated Iskra Print Collective, located in the same building. He continues to volunteer in the nonprofit studio, which offers screen-printing classes, and turns out multiples of his own prints there.

Later, when JDK downsized and reorganized as Solidarity of Unbridled Labour, Tupper worked for the firm "on the creative side," he said. Again, his focus was snowboard design.

A job at the Burton company itself was the next logical step. "That was always the dream," Tupper said. "I always wanted to combine my passion for snowboarding and working at Burton." But after five and a half years there, he was ready to move on. Tupper recently left Burton and is now devoted to freelance branding and illustration for clients, as well as his own art making.

The works in "Mayo" are not just random images; they represent the artist's life and observations during the pandemic. "Jackson Tupper has always preferred a homey existence retreated in his own bubble," writes Horikawa on the gallery's website. "A world in lockdown just made it socially acceptable to immerse himself fully in that comfort zone."

Tupper's domestic scenes make perfect sense in that context; some of his other images are more enigmatic. That giant green zucchini lounging on a black sofa? It's more than a nod to the fecund reputation of the squash.

"My girlfriend and I left town for two weeks in July and came back to find three monsters climbing out of their garden bed," Tupper explained. "It was a funny sight, and I liked imagining these vegetables as houseguests taking up space in our living room." 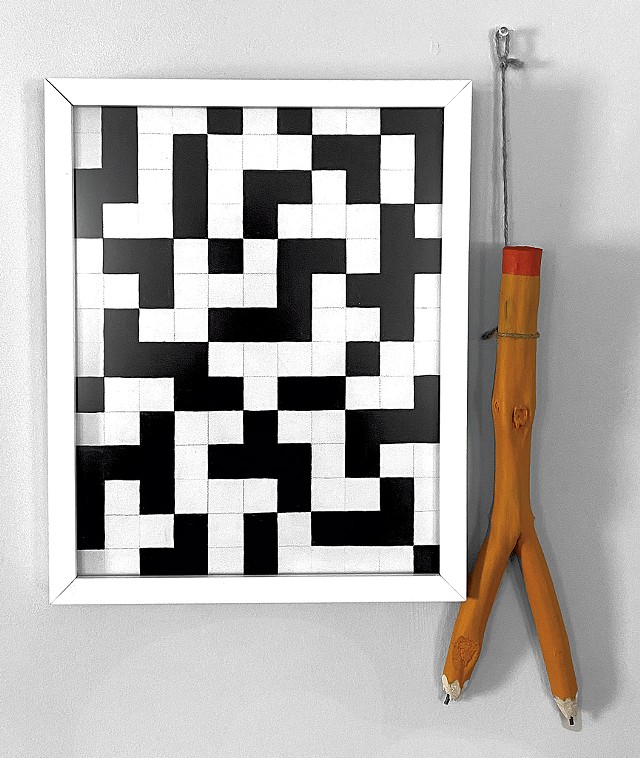 A few of the works employ jigsaw-cut wooden shapes to create dimension within a shadow box. In the amusing 10-inch-square "Egg," for example, a fried egg hovers above a black pan, both in sharp contrast to the red-painted background. In the large-scale "Planter," Tupper incorporates a cut-wood botanical shape directly onto the canvas.

As for the multiple images of tomatoes in the exhibition, Tupper revealed that he collects empty cans of San Marzano tomatoes and displays them around his house. The label's illustration of bright-red, elongated fruit against a white background resonates with the artist's clean design sensibility; it also informed his palette for this body of work. The limited colors — red, olive green, two shades of orange, black and white — give the exhibition a coherence that it might lack with a riot of hues.

That self-imposed restriction is a part of Tupper's artistic discipline. "Concept, form and color have the same weight of importance to me as the subject," he said. "I have been approaching my paintings with the mind of a screen printer."

The concepts for "Mayo" began with Tupper's living space and hobbies. The fishing and hunting he did with his father while growing up are represented on a cylindrical vase ("Brookie") and a painting of three flying geese ("Ducks"), respectively. While not explicitly autobiographical, the works offer glimpses into the artist's life and psyche.

Tupper invites visitors into his "bubble" with a cozy arrangement in one corner of the gallery: a comfortable chair, shelves stacked with cartoon books, a tree-stump side table.

The exhibition's title reflects Tupper's wit and appreciation for brevity, but its meaning is essential. "I named the show 'Mayo' as an ode to the ordinary, to give significance to rather mundane things and insignificant moments in my everyday routine," he explained. Even if they are not important, he added, "they are ingredients that contribute in building the metaphorical sandwich that is my day, or even my identity."

The original print version of this article was headlined "Pandemic Puzzles"