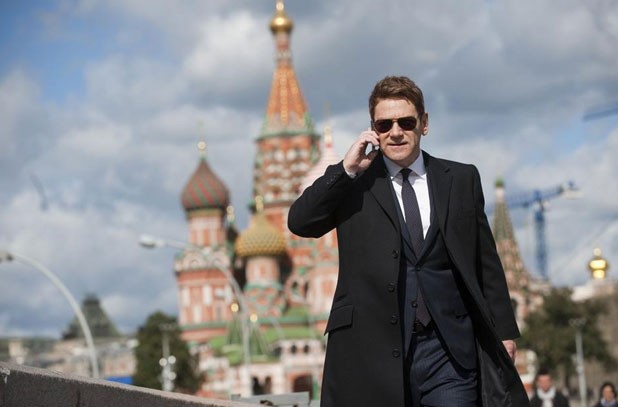 There’s a certain kind of movie, often released in January, that inspires a certain kind of unencouraging praise. Perhaps you’ve heard people say, “Well, it wasn’t brilliant, but I just felt like a cute romantic comedy.” Or “Yeah, it was just giant robots smashing each other, but how can that be bad?” Or “It didn’t reinvent the wheel, but I wanted a spy movie with some action, and it delivered.”

Jack Ryan: Shadow Recruit is one of these vending-machine movies: a good-enough, easily forgettable flick that benefits from selection bias (spy-thriller fans see spy thrillers) and low expectations. Indeed, it may be best remembered as the first movie ever to receive AARP’s new “Movies for Grown-ups” designation.

So what exactly makes this a “movie for grown-ups”? Jack Ryan is yet another film reboot of the late Tom Clancy’s intrepid CIA agent, who, if he were real, would qualify for AARP membership and then some. In this modern-day retelling of his origin story, however, Ryan (Chris Pine) is a perky fellow barely out of his twenties. He’s a brilliant financial analyst who joins the Marines after 9/11, suffers serious injury in a helicopter crash and accepts an invitation to use his skills for the CIA, recruited by Kevin Costner’s crusty operative.

Costner is definitely a “grown-up.” So is Kenneth Branagh, who directed the film and costars as its antagonist, a Russian financier who undertakes to avenge an American slight to his nation by triggering the next Great Depression.

The notion of assaulting a nation with a combo of traditional terrorism and market shenanigans is “grown-up,” too — at least, it requires characters to stand still and explain stuff. (“They’re still ideologues, but their new ideology is money,” Ryan’s boss avers to justify the post-Cold War villainizing of the Kremlin.) Too bad Branagh’s thick accent and mwa-ha-ha demeanor belong on the playground.

Like Showtime’s “Homeland,” Jack Ryan represents an effort to combine pulse-pounding action with the more “grown-up” elements of procedural and human drama. But it never nails the formula. The first scene in which Ryan must fight for his life is surprisingly intense and effective, and his subsequent shock is believable. From then on, however, our hero doesn’t seem the least bit perturbed by the unlikely stunts he performs.

The script implies that it’s the villain’s dastardly threat to Ryan’s doctor fiancée, Cathy (Keira Knightley), that turns him into a bad-guy-killing machine. Unfortunately, Knightley shows more chemistry with Branagh than with Pine. When the lovebirds share a scene, his twinkling and her smirking pretty much negate each other, along with the film’s “human drama” angle. (Cathy’s penchant for doing dumb things to further the plot doesn’t help.)

As for Pine, Costner’s character says it best when he compares Ryan to a Boy Scout on a field trip. This incarnation of the super-spy is bright as a new penny, likable as a golden retriever and memorable as … well, as memorable as any film can be that earns praise mainly for delivering standard genre thrills without being egregiously stupid.

There’s little to hate about Jack Ryan, and less to love. It may be better grounded in reality than, say, Skyfall, but it doesn’t have the breathtaking visuals, vivid supporting performances or action setpieces that made that movie a hit with young and old alike. Intriguing as its financial-thriller elements are, they too soon take a backseat to more photogenic forms of terrorism and counterterrorism. Grown-ups deserve something better than what Hollywood’s creaky January vending machine spat out.