Jack Is Back: The Republican Candidate for Attorney General Makes His Case 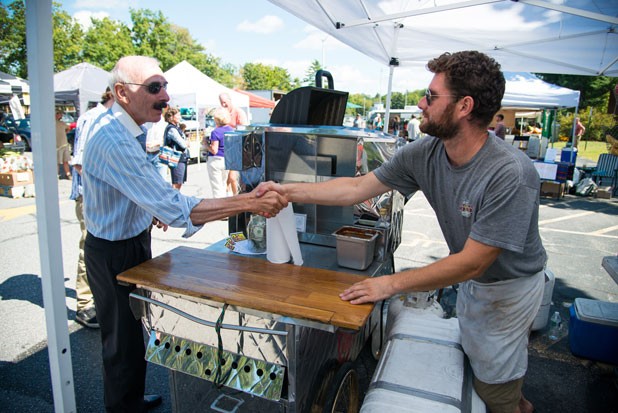 Republican attorney general candidate Jack McMullen wants to talk about serious issues such as crime and drug addiction — but first he’ll have to get past the teat jokes.

“The jokes already have popped up,” McMullen says during a recent interview in Burlington. “It was funny. No question.”

McMullen is referring to the gaffe heard ’round Vermont during the 1998 U.S. Senate campaign — his famous flub about the number of teats on a dairy cow. A recent transplant to Vermont, McMullen was running in a Republican primary against retired Tunbridge dairy farmer Fred Tuttle for the right to challenge U.S. Sen. Patrick Leahy.

During a Vermont Public Radio debate, McMullen botched the teat question posed by Tuttle and also mispronounced the name of the town Calais, feeding the perception of him as an out-of-state carpetbagger. After sinking $300,000 of his own money into the campaign, the businessman lost the primary to Tuttle — whose U.S. Senate bid was an elaborate publicity stunt for a Vermont movie with the same story line. McMullen lost to Leahy in the general election six years later.

Now making his third run for public office, 68-year-old McMullen concedes the Tuttle episode may be the most memorable thing about him.

But “I think Vermonters realize it’s been a long time since then,” McMullen says optimistically. “Having stayed here the following 15 years is testament to my affinity for Vermont and not my opportunism.”

McMullen is challenging seven-term incumbent Attorney General Bill Sorrell, who barely survived a bruising Democratic primary with Chittenden County State’s Attorney T.J. Donovan. McMullen watched that race closely, and it shows. At times, his message seems torn directly from Donovan’s playbook: making drug crime his No. 1 issue, stressing that he’d be a “proactive” attorney general and promising to save taxpayers money by “advising lawmakers before they pass legislation that may not pass constitutional muster.”

McMullen says Democrats are “fractured” postprimary and believes he can scoop up some of Donovan’s supporters. “There’s obviously a significant segment of the Democratic Party that thinks a change is in order,” McMullen says.

A Republican beating a 15-year-incumbent Democrat in a presidential-election year would seem unlikely at best in Vermont. In a recent op-ed for VPR, commentator Hamilton Davis argued that “McMullen’s shot is very long” because, so far at least, he lacks the money and organization to pose a serious threat to Sorrell.

“Sorrell is, in my judgment, very vulnerable,” Lindley says. “I think he’s vulnerable on the increase of drugs in the state. I don’t see any coordinated effort to take care of that problem, obviously leaving an awful lot of Vermonters worried about their own safety and protection of property.”

To do that, McMullen will have to convince voters he’s a real candidate — and that the Tuttle affair happened to some other guy. At his first press conference after the primary, McMullen laid out a three-point plan for combating drug-fueled property crimes in Vermont. The first two prongs are well-worn ideas: creating more residential beds to divert addicts from jail into treatment programs; and the creation of a statewide task force to look at disparities in drug-crime sentencing across Vermont’s 14 counties.

But it was the third prong that left some scratching their heads. McMullen said that as attorney general, he would pursue a compact with neighboring states to ship out-of-state criminals back to their home states to serve prison time — at the expense of taxpayers there. In return, Vermonters convicted of crimes in neighboring states would be sent back to Vermont to serve time — on our dime.

“The idea would be: It’s your guy, you pay for it,” McMullen told reporters outside a home in Burlington’s South End, which has experienced a rash of burglaries this summer.

Sorrell laughed off the proposal when asked about it in an interview. It’s a good idea in theory, Sorrell says, but no other state in its right mind would agree to it. “For one [party], that’s a very good deal. For the other, you’d have to have flunked elementary math to think that’s in your best interest,” the attorney general said with a chuckle.

Asked why a higher-population state would agree to an arrangement that would cost it more money, McMullen responded, “I don’t know. I think we could embarrass them into taking them back because we’re offering reciprocity. It’s worth exploration.”

Another potential perception challenge for McMullen: He isn’t licensed to practice law in Vermont, which is not a legal prerequisite for becoming attorney general. McMullen points out that he graduated from Harvard Law School, now teaches there and is a member of the bar in three jurisdictions, including New York State. He also argues that attorney general is largely a manager’s, not a lawyer’s, job.

“And I’m in the process of becoming a member of the Vermont bar,” he adds.

In the meantime, McMullen is campaigning on his business experience, arguing that Sorrell’s aggressive enforcement of consumer protection laws has created a hostile environment for job creators. He’s also hammering on the Burlington Telecom fiasco — calling it the most “flagrant breach of fiduciary duty” in recent Vermont history — and criticizing Sorrell for not investigating possible criminal wrongdoing by Burlington city officials.

Sorrell passed the criminal investigation to then-state’s attorney Keith Flynn of Orleans County because Sorrell had a conflict; decades ago, he was partner in a Burlington law firm that now represents Burlington Telecom.

“What message has been sent to the city of Burlington by this nonaction?” McMullen says. “Next time somebody gets a wild idea, as long as they didn’t steal the money and put it in a Swiss bank account, they go free? At a minimum there should have been a civil action to hold these officials accountable for their malfeasance.”

On Vermont Yankee, McMullen believes the lawsuit to shut down the aging nuclear power plant is a legal loser. As attorney general, he says he would advise the governor to abandon the case and cut the best deal possible with plant owners Entergy. However, McMullen is less eager to discuss his personal views on whether the nuke plant should be shut down, saying, “I think my opinion on that is irrelevant.”

Pressed on the question, McMullen says he favors nuclear power as a cheaper alternative to wind and solar, and said he has no concerns over the plant’s safety. He calls a 2007 cooling-tower collapse at VY a “totally peripheral issue” and downplays the plant’s radioactive leaks of 2010.

“Yes, they have a tritium leak. So do 29 other reactors in the American nuclear fleet,” says McMullen, who worked as a technical manager of the Navy’s nuclear-power program. “You could drink a glass of tritium 30 seconds after it came out of the tap. It has a half-life of seconds, milliseconds.”

Will McMullen be able to sell his ideas? Although he’s good-natured about his past mistakes, he still struggles to connect with average voters. At the South Burlington Farmers Market last weekend, McMullen made the rounds to the dozen or so vendors, sampling food and passing out business cards.

At one booth, he met Jamie DePalma, who raises organic chickens and turkeys at Freshies Farm in South Burlington. McMullen chatted up the flannel-clad young farmer, who told him she works winters as “director of the ski and ride school” at Bolton Valley resort.

There, in the presence of a reporter, McMullen failed yet another teat test.