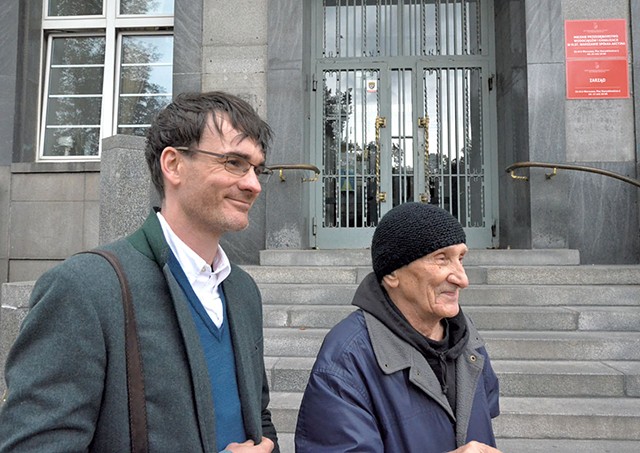 On September 19, 1940, Witold Pilecki awoke near dawn, just before German soldiers and plainclothes police pounded on his door to arrest him. Pilecki, a member of the Polish underground fighting the Nazi occupation, made no attempt to hide or flee. He knew already that the soldiers were coming and where they were taking him. In fact, he'd volunteered to go to a then-little-known concentration camp outside the town of Owicim.

The Germans called it Auschwitz.

Before being led from the apartment, 39-year-old Pilecki bent and handed his 3-year-old nephew his favorite teddy bear, which had fallen on the floor. In that moment of extreme danger, Pilecki had the presence of mind to comfort a frightened child.

For Jack Fairweather, the Charlotte author of The Volunteer: One Man, An Underground Army, and the Secret Mission to Destroy Auschwitz, that small but revelatory detail speaks volumes about Pilecki's character. And, if the scene seems too cinematically perfect to be true, Fairweather's rigorous research and meticulous footnoting prove otherwise.

"When you're writing about these sorts of things, you feel intensively the need for every detail to be as accurate as possible," Fairweather said in an interview with Seven Days last week. "You don't want to fictionalize what happened. Given the stories of escapes, of assassinating SS men and stealing radios, you don't need to."

After the war, the story of Pilecki, who was the first to report on the horrific conditions inside Auschwitz, was officially erased from history in his own country. Poland's communist regime deemed Pilecki an "enemy of the state" and locked away his records for decades. They emerged only after the collapse of the Soviet Union in 1989 and the opening of the official archives in Warsaw.

To recount this gripping true story, Fairweather adopted a technique he called "literary forensics," or re-creating "the scene of the crime" in Auschwitz. Working with a team of Polish researchers, the Welsh-born author spent years physically retracing Pilecki's steps. He accessed official records and pored through camp records and the written testimonies of thousands of Auschwitz survivors. Many of the latter had never before been translated into English, and more than two dozen mentioned Pilecki by name.

Fairweather visited the apartment where the Polish resister was arrested and interviewed at least 30 people who knew him, including Pilecki's nephew, Marek Ostrowska, whom Fairweather described in the interview as a "hale and articulate 86-year-old Polish gentleman" who speaks English.

Fairweather was well qualified to tackle this ambitious project. The 40-year-old Oxford-educated journalist has written two previous books on warfare — War of Choice: The British in Iraq 2003-9 (2011) and The Good War: Why We Couldn't Win the War or the Peace in Afghanistan (2014) — and knows firsthand the tight bonds that form among people living in near-constant fear of death.

A former war correspondent who was embedded with British troops during the 2003 Iraq invasion, Fairweather served as bureau chief for the Daily Telegraph in Baghdad. There he met his wife, fellow journalist Christina Asquith, while she was on assignment for the New York Times. In Iraq, Fairweather survived an attempted kidnapping and an attempted suicide bombing; later, he covered Afghanistan for the Washington Post.

Fairweather defies the stereotype of the war correspondent as a cynical, hard-charging adrenaline junkie. Soft-spoken, sensitive and articulate, he has penned an absorbing and thought-provoking account of the Polish resisters and the extreme sacrifices they made to inform the Allies of Nazi atrocities and convince them to bomb Auschwitz.

"The incredible thing about Pilecki's story is that that was his job — to go [to Auschwitz] and find out more," Fairweather said. "It was just a whole new perspective for me on the camp, this idea that you didn't have to be a victim and succumb to the death and destruction." 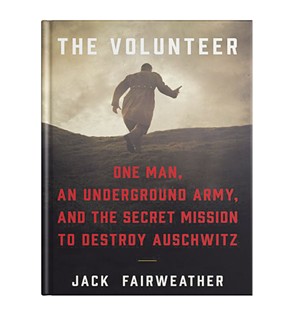 SEVEN DAYS: What was your most startling discovery about Pilecki?

JACK FAIRWEATHER: I tried to work out what allowed him to hold to his moral compass when so many others in the camp lost theirs. Obviously, they were all starving; the whole system encouraged them to inform on one another for scraps of bread, and the weakest were weeded out and the strongest rewarded. What made him able to find the strength to connect with others?

There's a scene with [fellow resistance fighter] Kon Piekarski, one of the very rare scenes describing [Pilecki] recruiting in the camp, that showed me something about his qualities. When you think of Pilecki — brave, courageous, heroic — I always found them a little bit distancing. They're qualities, but they're not actually motivations that allow you to connect with what he did.

When he spoke to Kon and recruited him, it's one of my favorite scenes. Kon's like, "What are you, crazy? We're starving; we're half dying. How can we resist?" The transformative moment was that Pilecki trusted Piekarski with the secret of his mission. It's that act of trust, of him putting his life in Piekarski's hands, that persuaded the other man that they had to believe in something greater than themselves.

JF: There's a lot of death and brutality. But there's that double tragedy that the world didn't respond to his reports at the time. And, of course, his whole story was buried and not listened to and remained unknown for decades. His story, one of failure, should be more broadly known. There's a powerful message contained within those failures, both about why the world didn't listen at the time and how Pilecki kept trying to alert the world. It speaks to how we think about, or don't think about, atrocities in war zones, and how we don't connect with the suffering of others. That's the heart of the story.

SD: Does your book take on added significance with the current rise of authoritarian rulers and white nationalists worldwide?

JF: It's hard not to see the dangers in the way our leaders talk about groups and communities, and recognize that the values we hold dear are teetering on the brink and how quickly they can be lost. You put in place an ideology and a leader who is prepared to break down the barriers of polite speech, and it pushes you closer to what happened in the past.

SD: Did you often ask yourself, "What would I have done under those same circumstances?"

JF: For sure. What those guys went through in the camp is unbelievable. There are certain traits and qualities of survivors that I know I don't have. Of course you think, Could I have survived Auschwitz? That's one of the questions I hope to challenge people with. Do you have what this man had, to be not just a survivor but a helper, a connecter, a resister? 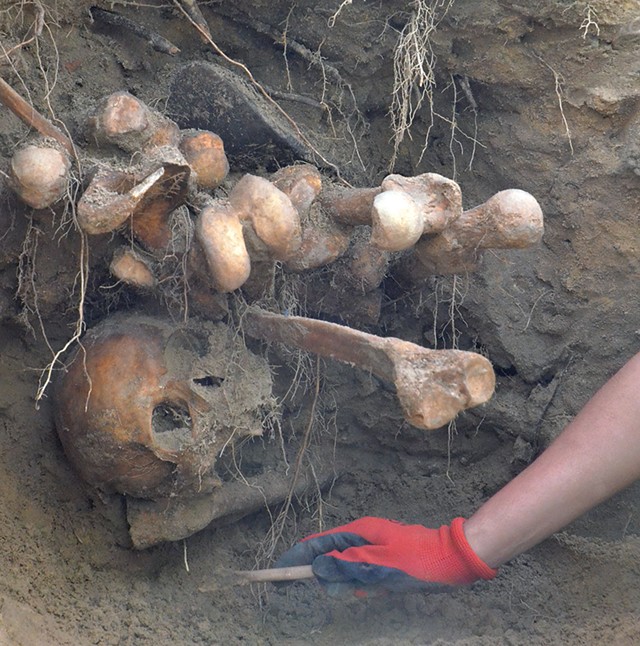 SD: Did your experiences reporting from war zones make it easier to tell Pilecki's story?

JF: I think it allowed me to draw out this element to his story, which was his work as a reporter, this intellectual journey he had to take in order to get his head around understanding what the Nazis were up to. I identified with that, having myself missed big stories in Iraq that were staring me in the face.

When the first Jewish families were being gassed in Auschwitz, Pilecki didn't immediately say, "Aha! This is the Holocaust." He tried to find some explanation for it. He couldn't get his head around this notion that the Germans would gas people based on their ethnicity and religion. It didn't make sense to him. He had this sense that everything the Germans did was very logical. This was a work camp. Why would they be killing workers? So he came up with this theory that the Nazis were stealing their wealth, and that's why they were killing them.

SD: What big stories did you miss in Iraq?

JF: I remember hearing about U.S. abuses of Iraqi detainees. It was sometimes featured in stories but often dismissed as propaganda. Of course, [torture at] Abu Ghraib [prison] was happening, and there was systematic abuse of Iraqi detainees, and I missed that story. I tried to rationalize what I was hearing. I remember talking to a lot of journalists. That was a really important story, but we just couldn't get our heads around the idea that troops would do that.

It's those kinds of mind shifts that Pilecki had to make — the euthanasia program in the camp, the experiments in the gassing of Soviet POWs, the arrival of the Jewish families. I came to respect and admire his courage in constantly pushing to understand. His struggle to understand is one we all face when we think about the Holocaust. And certainly everyone who read his reports was confronted with the evidence he was presenting, and they, for the most part, didn't engage but looked away.

SD: Pilecki didn't convince the Allies to bomb Auschwitz. So what was his greatest success?

JF: He was the first guy to warn the West about the camp's horrors. That's an historical accolade that he should have and one he never got to realize himself. He rescued hundreds of prisoners in the camp through the underground. That's one of the things that really comes through in the personal testimonies preserved in the [Auschwitz-Birkenau Memorial and Museum]. Despite the fact that it was still dangerous [in Poland] in the 1960s and '70s to speak about him, survivors wanted to say, "Yes, this guy saved my life, and here's how." He was a rescuer of all sorts, and it's historically important that there was a rescuer working in Auschwitz saving lives.

That's important on a human level, too. I was inspired to read about him stealing a radio and the escapes he arranged and killing an SS man. As incredible as those stories are, it makes you think in your own life, Can I be a bit braver? Is there not more I could be doing?

The original print version of this article was headlined "Mission: Incredible | A Charlotte writer's book tells the story of the man who tried to destroy Auschwitz from inside"