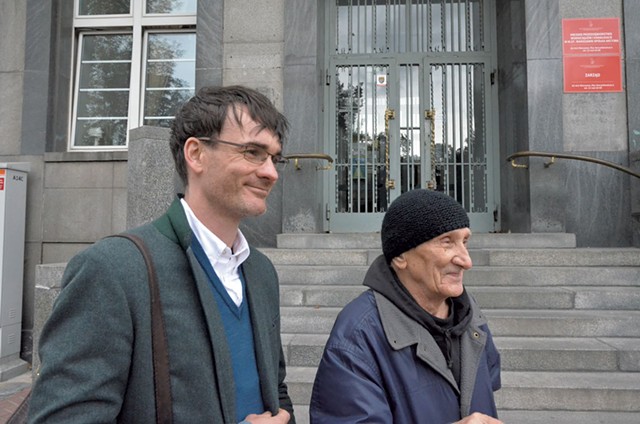 Few wars have been researched, written about and documented in literature and film more than World War II. But when Wales-born journalist Jack Fairweather first heard the true tale of Witold Pilecki, a Polish resistance fighter who volunteered to be imprisoned in the Auschwitz concentration camp in order to report back to Allied forces what was occurring inside, he thought the story cried out for deeper investigation.

The result of his meticulous research was the 2019 book The Volunteer: One Man, An Underground Army, and the Secret Mission to Destroy Auschwitz, which received international critical acclaim. In late January — the same week as the 75th anniversary of the liberation of Auschwitz — The Volunteer received the 2019 Costa Book of the Year award, which is among the United Kingdom's most prestigious literary awards and comes with a £30,000 ($38,000) prize.

Fairweather's book, which quickly rose to the top of the Sunday Times' best-seller list, was chosen from among the winners of five categories of Costa awards — first novel, novel, biography, poetry and children's book — as the overall book-of-the-year winner.

Until The Volunteer, Pilecki's gripping life story was virtually unknown outside of Poland, where today he is considered a national hero. Now, Pilecki's biography is likely to reach an even wider audience. In February, Fairweather sold the movie rights to London-based House Productions and its cofounder and Oscar-winning producer Tessa Ross, whose film credits include Billy Elliot (2000), Slumdog Millionaire (2008), 12 Years a Slave (2013) and Ex Machina (2014).

Because Fairweather wrote Pilecki's story with almost cinematic detail, it seems ideally suited for translation to the big screen. When Pilecki, as a 39-year-old cavalry officer and member of the Polish Underground State, was taken to Auschwitz in September 1940, little was known about the Nazis' horrific mission metastasizing inside: the Final Solution, now known as the Holocaust — the mass murder of European Jews and millions of others.

During his two and a half years in the death camp, Pilecki organized a resistance movement; smuggled out intelligence reports; stole equipment, food and other supplies; and killed SS officers and Nazi informants. He later escaped Auschwitz himself and joined in the Warsaw uprising.

Despite his heroism, Pilecki wasn't greeted as a hero of the Polish people after the war. Arrested by Poland's Soviet-backed communist regime, he was put on trial, ruled a traitor and enemy of the state, and executed. The Polish government sealed all official records of his wartime exploits for half a century.

"It really gets to the core of bravery and sort of pushes us to explore what we know about the war [and] what we know about what is humanly possible to endure," Fairweather said about Pilecki in a recent interview. "There's this adventure story and the survival story, of course, and his fight against the greatest act of evil ever perpetrated by mankind."

Since its release last June, The Volunteer has been translated into 18 other languages, from Icelandic to Hebrew; a much-anticipated Polish-language version is due out in May. The book is now sold at the United States Holocaust Memorial Museum in Washington, D.C. Fairweather has also signed a book deal with children's publisher Scholastic to pen a young-adult version of The Volunteer, which is due out in 2022.

Last September, Fairweather cocurated an exhibition titled "The Volunteer: Witold Pilecki and His Mission in Auschwitz," which is on display through March at the Pilecki Institute, near the Brandenburg Gate in Berlin. In attendance at its opening were representatives of the Pilecki family, Auschwitz survivors, high-ranking German government ministers and Poland's ambassador to Germany.

Since then, Fairweather has continued to travel extensively to promote the book, speaking to Polish groups and Jewish congregations throughout North America and overseas. The events attract people from diverse backgrounds, most of whom previously knew nothing about Pilecki. Some share their own stories with other attendees of surviving the Nazi death camps.

"Knowing that I was speaking to a witness in the audience was just incredibly, incredibly moving," Fairweather said. "Of course ... [that] is what Pilecki was all about: bringing people together. That's how he was able to be so successful, in Auschwitz and beyond."