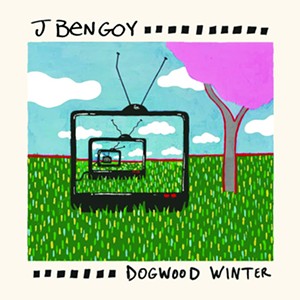 The boys of "bummer rock" quintet J Bengoy seem thick as thieves. As they state in the liner notes to their full-length debut, Dogwood Winter, they're a family, and they love each other. If you've ever seen the young Burlington quintet live — or even caught a glimpse of them in the audience of a local indie-rock show — you've probably noticed how adorably stoked they are on each other.

With songs largely about the pain of prolonged adolescence, bummer rock aptly expresses the band's outlook. After all, a bummer is something that stings in the moment but usually fades away rather quickly. Isn't that what life in your twenties is all about?

Keyboardist Justin Barton, one of the group's two front men, sings with the grandiose, befuddled charm of Jonathan Richman or David Byrne. On "Simpsons," the album's vaguely country sleeper hit, he sings, "Can we go back to your house and get butt naked?" But rather than a hookup, it's a literal Netflix-and-chill situation as he clarifies he just wants to watch "The Simpsons." Intimacy supersedes lust.

Guitarist and co-front man Charlie Hill leads the sweetly sad beach-pop song "So Good (I Could Die)." A peppy organ line strings together gleaming, syncopated guitar chords. Metacognition clashes with a feeling of elated satisfaction as Hill sings, "So good / I could die right now / Living any longer would take away from it."

"Armchair" is a soulful, bluesy stomper that feels like a breakup song ("Cut me loose / Cut it clean now"). The jangly cut erupts into a resplendent climax before its abrupt conclusion.

"Bleached" is a gently strummed snapshot of fleeting, butterfly-inducing romantic tension on a summer's eve. You can practically see a simmering, pastel sunset illuminating his face as Barton sings, "The thought that we might have made eyes / Was more than I could have concealed."

Without getting lost in self-seriousness, J Bengoy distill familiar scenarios, mixed emotions and relatable crises down to their very essence. Their lyrics are just nuanced enough to feel distinguished yet never stray into pompousness. And musically, they've gelled into one of the strongest young rock acts in Vermont.

Dogwood Winter is available at jbengoy.bandcamp.com. J Bengoy celebrate the release on Saturday, April 21, at an off-the-grid location in Burlington. Visit hopealliswell.net for more info.